An owner of a bar and restaurant in a New Jersey suburb wondered if he would stay in business after an outdoor seating area, newly opened after months of lockdown, was nearly wiped out.

A mother in a town north of New York City, already anxious about what the new school year might look like for her two young sons, shopped for food that would not spoil since she wasn’t sure when her power would return.

And in another New Jersey town, an older woman who mostly stays home to avoid the risk of being exposed to the coronavirus was dealing with a large tree that had smashed through a window.

Officials acknowledged that some people may not have their power restored for several days and Con Edison said the outage in its service area in New York City and Westchester County was the second largest in its history, eclipsed only by Hurricane Sandy in 2012. 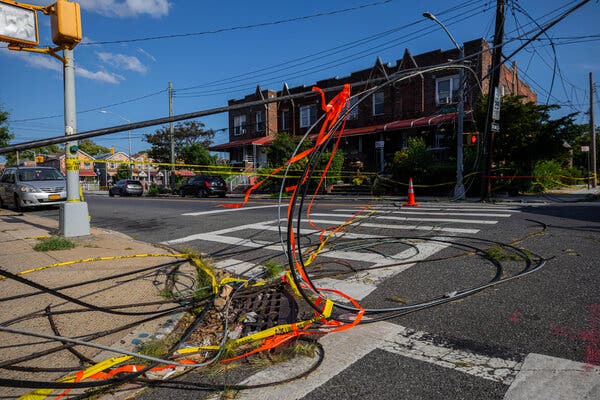 To many, the storm added another layer of pain to life already complicated by the pandemic.

“It’s like I wish 2020 would not have even shown its face,” said Scott G. Morgan, the administrator and emergency management coordinator for Upper Township, N.J., a seaside community near the southern tip of the state, where a tornado touched down on Tuesday. “It’s just been one hellacious year — for all of us.”

By Wednesday morning, the fast moving, but vicious storm had left the area, crossing into Canada before dissipating.

But Isaias left a path of destruction and death as it raced up the East Coast after making landfall in North Carolina.

Two people were killed when a tornado struck a neighborhood in northeast North Carolina. A woman died in St. Mary’s County, Md., when a tree toppled by the winds landed on her vehicle.

In New York, the storm claimed at least one life when a 60-year-old man, who was sitting on the passenger side of a car in Briarwood, Queens, was killed on Tuesday when a tree fell on the vehicle. 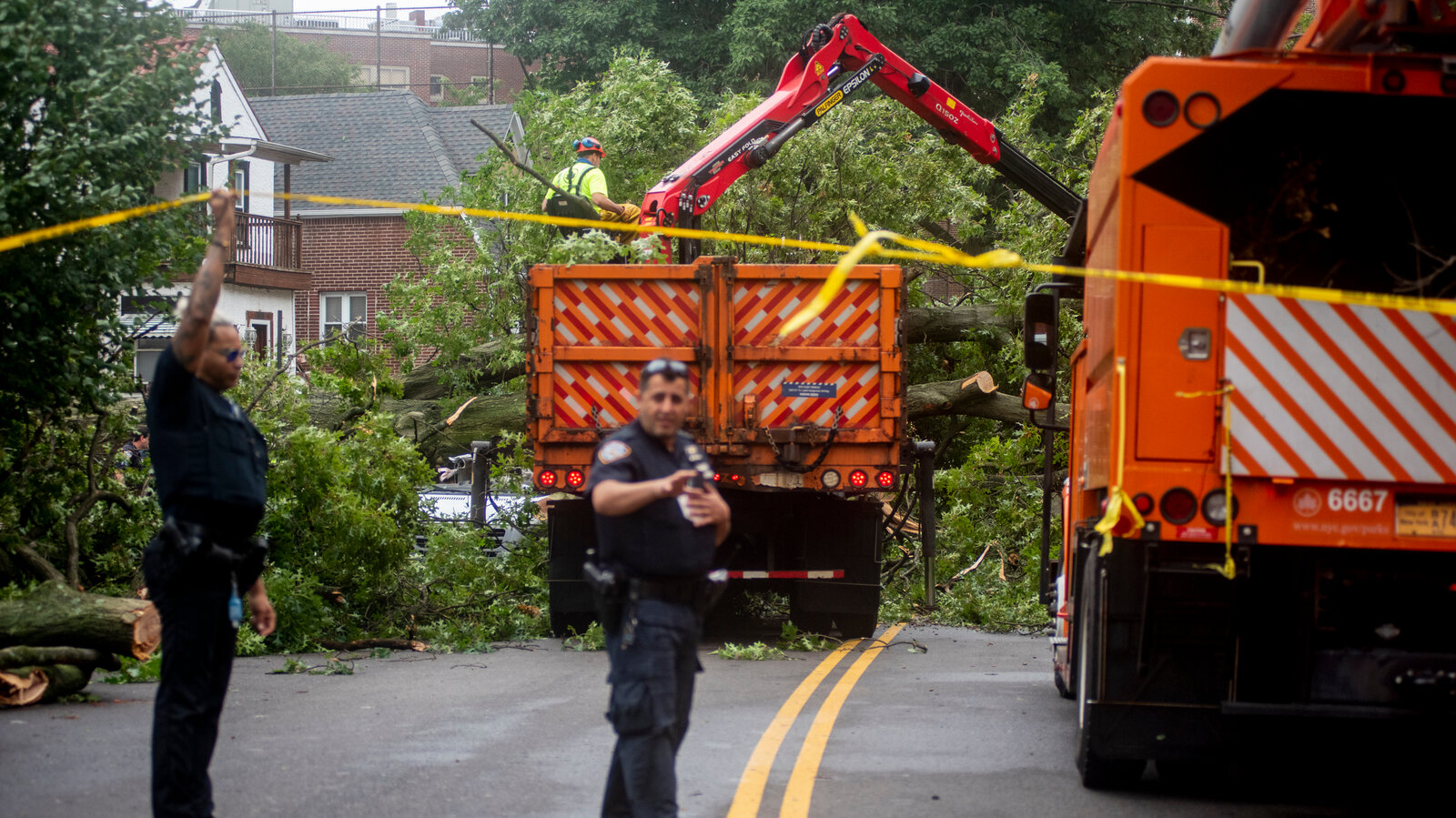 The storm that tore through the region on Tuesday killed one person in New York City and was second only to Hurricane Sandy in knocking out power to Con Edison customers.CreditCredit...Johnny Milano for The New York Times

And on Wednesday, in New Jersey, a 68-year-old man from River Vale, in Bergen County, was killed when he came into contact with low-hanging wires as he cleared storm debris from his lawn, the authorities said.

Gov. Philip D. Murphy of New Jersey said on Wednesday that the damage could have been worse if the storm had not moved so rapidly through the area. “Like a knife through hot butter,” he told a local radio station.

Still, the scale of the damage was extensive with fallen trees taking an enormous toll on the overhead power lines, which make up a significant portion of the region’s electrical grid.

“We’ve had over 16,000 service requests for downed trees, which I think is the most we’ve ever had in the city,” Deanne Criswell, the emergency management commissioner for New York City, said in an interview on Wednesday with the television station WPIX.

In New Jersey, outages at hospitals were complicating state officials’ efforts to compile reports on coronavirus hospitalizations and deaths.

Taking a break from cleanup in Marmora, N.J.Credit...Kriston Jae Bethel for The New York Times

Gov. Andrew M. Cuomo of New York lashed out at the utilities, including Con Edison, accusing them of not adequately preparing for Isaias and saying the state would investigate “how such a failure could have taken place.”

This is not the first time Mr. Cuomo has criticized utilities over power outages following storms.

“The fact that many customers still do not know when their power will be restored makes it even more unacceptable,” Mr. Cuomo said. “The worst of this situation was avoidable, and it cannot happen again.”

Con Edison did not immediately respond to a request for comment.

Joe Fiordaliso, president of the New Jersey Board of Public Utilities, said that some people might not have power until the end of the weekend.

“Our hope is by late Friday night, 80 percent of customers will have been restored,” Mr. Fiordaliso said.

The power outages in the region were the most severe since Hurricane Sandy in 2012.Credit...Johnny Milano for The New York Times

Nick Conforti, an owner of the Brook Taphouse in West Caldwell, N.J., said his restaurant was shut down for more than three months because of the pandemic. But when the state allowed outdoor dining to resume, he invested about $13,000 in a new outdoor area, including new tents, chairs, tables, a sound system and bar shelving. About five weeks ago, the taphouse reopened.

On Tuesday, however, the entire area — including phones, computers and tents — was wrecked by Isaias, and Mr. Conforti did not know if he could continue operating.

“The storm destroyed everything,” he said. “I’m almost ready to close down over here.”

On Wednesday morning, many residents were forced to navigate streets blocked off to vehicles by trees and power lines. With people desperate for power, some stores sold out of generators.

Around noon at a Target store in Mount Kisco, N.Y., Diliam Galvan was shopping with her two sons to get bottled water and food that would not spoil in the heat. The family, who live in Katonah, had been without power for almost a day, and she was not sure if the chicken, beef, milk and eggs stuffed in her refrigerator would last.

Her sons — Dennis, 10, and Henderson Portillo, 6 — have been largely stuck at home since school closed in March.

“It’s been so boring,” Dennis said. “And now we don’t even have electricity.”

“Who knows if they will go back to school soon?” she said. “We don’t even know when we will get power back.”

A man chops a tree that fell in front of his home in Middle Village, Queens.Credit...Johnny Milano for The New York Times

Mr. Morgan, the emergency management coordinator in Upper Township, said a tornado had caused extensive property damage but there were no reports of injuries and only one family was displaced.

“It could have been significantly worse,” Mr. Morgan said in an interview as he used a drone to survey the damage. “We’re not used to tornadoes in this area.”

The tornado came in off the Atlantic Ocean near Strathmere, N.J., but did not immediately make landfall. It left a corridor of downed trees and vegetation on either side of the Garden State Parkway, which the tornado had crossed over.

“You can see a definite cut right through the woods on either side,” he said.

In Brewster, about 60 miles north of Midtown Manhattan, the stoplights on State Route 22 remained out Wednesday morning. Drivers inched their way into busy intersections and waited for considerate drivers to allow them through.

Greg Semmeles, the owner of Brewster Wine and Liquor, stood outside his shop watching the traffic navigating the intersections.

“I’m surprised I’m still out of power,” he said. “Usually they get businesses up and running first, and the lights on 22 still being out, that’s not a good sign.”

Mr. Semmeles, who lives in New Fairfield, Conn., said he was lucky. His liquor store was considered essential and allowed to remain open during the worst of the pandemic in New York. Even now, the power loss was mostly an inconvenience.

The aftermath of the storm in Englewood, N.J.Credit...Chang W. Lee/The New York Times

“Most of my stuff isn’t perishable, except for the ice,” he said. “And I can still take cash.”

The power outages meant pumps at gas stations in Brewster were not working. One gas station limited customers to three gallons and accepted only cash.

Paul Bryson, 63, said he went out early on Wednesday to get gas for his pickup truck at the few places it was available.

He planned to return in the evening to get gas for his generator.

“The last time I remember going through this was Superstorm Sandy,” Bryson said. “This is crazy. It’s not bad enough we have the coronavirus and now we are hit with this.”

Lula Sisco, 82, of Englewood N.J., was sitting in her living room on Tuesday when she heard a loud pop — a tree falling through her dining room window.

The pandemic had largely kept her homebound. She only left the house for doctor’s appointments or a monthly trip to the bank. She lost power for more than five hours on Tuesday. And on Wednesday, she waited for insurance agents to show up before she could get the window repaired.

Tottenham are not selling Mourinho's merch - because Chelsea still own the trademark rights. But it didn't stop Manchester United
Shomurodov is close to moving from Rostov to Genoa for 8 million euros (Sport Italia)
Pobegalov about 12 cases of covid in Shinnik: I hope we can start training by October 4
Kulchiy is likely to become an acting coach of Dynamo. They want to keep Novikov in the club's system
Due to covid, the Premier League season may be considered prematurely completed if the 2/3 and 3/4 rounds are completed
Bayern could give Nübel a loan deal if Ulreich stays at the club
Former Italy striker Pazzini is Interested in Spezia. He is 36
Source https://www.nytimes.com/2020/08/05/nyregion/isaias-hurricane-storm-damage-ny-nj.html