Tampa Bay will be without Steven Stamkos, its captain and top center, for the remainder of the Stanley Cup finals, Lightning Coach Jon Cooper said Sunday.

“Hopefully the next time we see him on the ice is for a trophy presentation,” said Cooper, whose team leads the Dallas Stars three games to two in the best-of-seven series.

Stamkos, who has twice led the N.H.L. in goals and was the No. 1 overall pick in the 2008 draft, has played a total of two minutes and 47 seconds in these playoffs. That came across the five shifts he played in the first period of Game 3, in which he scored a goal on his only shot. It gave the Lightning a 2-0 lead in a game they won 5-2.

“To be honest, I didn’t think he was playing at all in these playoffs,” Cooper said. “I don’t think any of us did. So, he gave us 2:47 of brilliant hockey; that’s a phenomenal story.”

If Stamkos had something of a Willis Reed moment — when Reed hobbled down the tunnel for Game 7 of the 1970 N.B.A. finals to score the Knicks’ first two field goals with a torn thigh muscle — then Nikita Kucherov has played the role of Walt Frazier, the star of that game. Kucherov and his linemate Brayden Point, a center, each have seven points in the series. Kucherov’s 26 assists this postseason are five shy of Wayne Gretzky’s playoff record. Only Gretzky and Mario Lemieux have accumulated more helpers in a single postseason. Kucherov, Point and the Lightning’s top defenseman, Victor Hedman, are among the favorites for the postseason’s most valuable player award, the Conn Smythe Trophy.

Before Game 3, Stamkos had last played on Feb. 25, and he had surgery because of a core muscle injury on March 2. Because Stamkos was initially expected to be out for six to eight weeks, the suspension of play between March 12 and late July because of the coronavirus pandemic would have appeared to have opened the door for a return to the ice.

But in July Stamkos was sidelined anew. His condition has been shrouded in familiar, vague terms like “lower-body injury,” general ones like “an issue,” and also with the new distinctions for 2020, “unfit to play” and “unable to compete.” 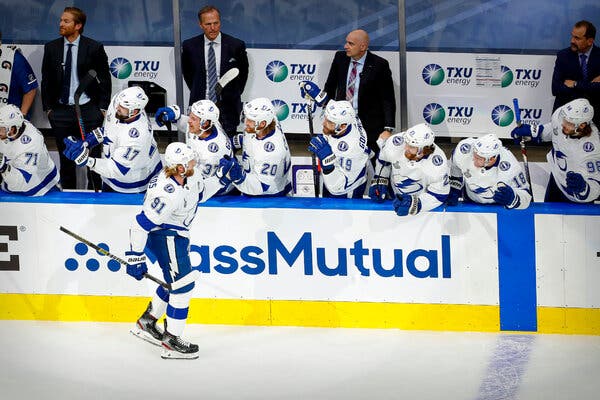 Stamkos scored in the first period of Game 3, a 5-2 win for Tampa Bay.Credit...Perry Nelson/USA Today Sports, via Reuters

“There’s been a lot of behind-the-scenes things that I’ll be glad to share with you guys after the season,” Stamkos said in a news conference after Game 3. “We’re focused on winning right now.”

Stamkos is the Lightning’s longest tenured player, and one of just two players remaining from their 2011 conference finals team. The other is Hedman.

The selection of Stamkos in 2008 and Hedman second over all in 2009 catapulted the Lightning back to the top of the league. They had won the Stanley Cup in 2004, but then followed up with a pair of first-round exits and three nonplayoff seasons, including a pair of last-place finishes in their division.

The Lightning have been to five conference finals and two Stanley Cup finals in the past 10 seasons. They also tied a record with 62 regular-season wins last season, but the bottom-seeded Columbus Blue Jackets stunned them with a sweep in the first round.

If the Lightning can win either Game 6 on Monday night in Edmonton, Alberta, or a potential Game 7 on Wednesday, they would become the first team in the expansion era to win the Stanley Cup after being swept out of the first round the previous season. They will have to accomplish that feat without Stamkos, who has been a pillar of their franchise for more than a decade.

Yuran headed Khabarovsk SKA
Brugge forward Dennis on goal for Zenit: I said that I only score grandees, but it was a joke
PSG defender Kimpembe Pro 1:2 with Manchester United: We can only blame ourselves
Lopetegui Pro 0:0 with Chelsea: Sevilla showed a good team game
Rashford on victory over PSG: Manchester United now have a strong position in the group
Nagelsmann victory over Istanbul: Not fully satisfied with the game Leipzig was fatigue, not the most effective pressure
Goalkeeper Brugge Croat about 2:1 with Zenit: We proved that we should not be considered outsiders of the group
Source https://www.nytimes.com/2020/09/27/sports/hockey/steven-stamkos-injury-stanley-cup.html

How 3D Printing Gets GM Racing to the Checkered Flag

From Screen Print to Acrylic Painting: A Demo

Even Manufacturing Is Using Remote Workers

Cobots vs. COVID-19 — Designed and Deployed a Solution in 2 Weeks

Police Commemoration Day: History and significance of this day | All you need to know

Revitalize Your Palette by Going Green

Saints allowed to start having fans at games

Many thorny global situations hinge on US election outcome

13 Award-Winning Pieces of Acrylic Art You Have to See

LEADING OFF: Dodgers turn to Jansen, bullpen for Game 2

Total package: Betts paying off big for Dodgers in every way

Owners of California dive boat faulted for fire that killed 34

50 Cent doubles down on opposition to Joe Biden's tax plan: 'I don’t want to be 20cent'

Pandemic relief talks inch ahead but McConnell is resistant

‘So much work to do’: How Biden is planning for transition

Are You Having Issues With Your Mail-In Ballot?

Coronavirus vaccine update: US trial of AstraZeneca COVID vaccine may resume this week

The 2020 Presidential Election: The Questions Voters Have

The Dodgers piled on the runs and seized control of the World Series.