The 10-foot-tall bronze statue of controversial former Philadelphia Mayor Frank Rizzo was removed from the front steps of the Municipal Services Building in Center City early Wednesday morning after days of being defaced and graffitied by protesters. 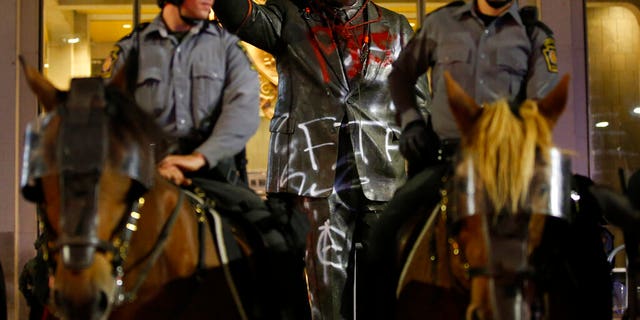 A vandalized statue of the late Philadelphia Mayor Frank Rizzo, who also served as the city's police commissioner, stands behind mounted State Police officers outside the Municipal Services Building in Philadelphia, The statue was vandalized during a protest over the death of George Floyd, a black man who died in Minneapolis police custody on May 25. (AP)

Rizzo, who was also the police commissioner of the city, was lauded as a tough on crime mayor, but his critics opposed him for allegedly being discriminatory against minorities.

For days, protesters participating in demonstrations seeking justice for George Floyd congregated at the statue, with some people spray painting and vandalizing the effigy, which was donated to the city in 1998 after Rizzo died.

"The continued display of the statue has understandably enraged and hurt many Philadelphians, including those protesting the heinous murders of George Floyd and too many others," the city's Mayor Jim Kenney said on Wednesday. "I have seen and heard their anguish. This statue now no longer stands in front of a building that serves all Philadelphians."

Controversy over the statue predated the protests, however, and Kenney had previously promised to have it removed and relocated by 2021.

Earlier in the week, Kenney said he “never liked” the statue and announced a plan to move the statue later this month.

Making good on his pledge two days later, the statue was lifted from its post by a crane and moved to a secure storage facility “until a plan is developed to donate, relocate, or otherwise dispose of it,” the city said.

No specifics were given about the next steps. However, officials said “if and when” they make a decision, it “will be presented to the Philadelphia Art Commission for approval.”

Philadelphia has been wracked by protests and violence in recent days, with the city deploying the state National Guard to restore order as looting and rioting continued.

In his early morning statement addressing the statue's removal, Kenney called Rizzo's tenure from 1972 to 1980 in the city "among the worst periods in Philadelphia's history."

"The statue is a deplorable monument to racism, bigotry, and police brutality for members of the Black community, the LGBTQ community, and many others," he said.

Legia won the Polish championship for the 4th time in five years. It repeated the League record for titles (14)
Lazio has lost 3 matches in a row and can concede 2nd place in Serie A if Atalanta wins against Juve
A Parma employee has a coronavirus. The team is isolated on the base, but will continue to play in the championship
Kalidou Coulibaly: Napoli is not going to Barcelona as tourists. We are able to give battle
PSG have extended their contract with Kimpembe until 2024
Suarez is not in the start for the match with Valladolid. He has scored 4 goals in the last 4 games for Barca
Dyche Pro 1:1 with Liverpool: top team Scored. Talking about three points is too much
Source https://www.foxnews.com/us/statue-frank-rizzo-removed-philadelphia