With Americans now dying at a rate of 1,000 people a day and coronavirus cases increasing in some states, parents and teachers are facing tough choices about when and how to go back to school. COVID-19 cases have now topped 5.1 million in the U.S., and the virus has killed more than 165,000 nationwide, according to data collected by John Hopkins University.

More than half a million people have been infected in Texas, and the state's positivity rate has jumped to more than 24%.

"By the way, that's a really high number, it really means that there are a lot of cases that are being missed across the state," said Dr. Ashish Jha.

Health officials said more testing centers in Texas are open than there have been in months, but fewer people are going to them. The governor said some schools may not reopen until October. 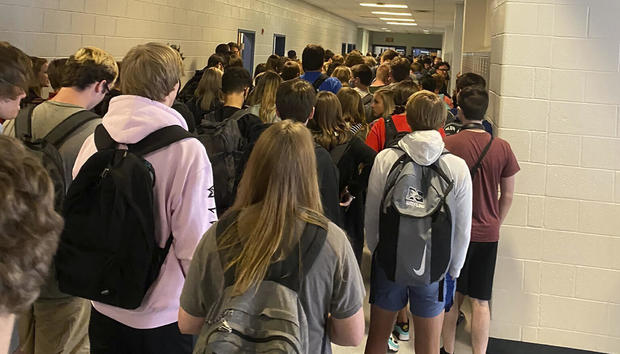 In this photo posted on Twitter, students crowd a hallway at North Paulding High School in Dallas, Georgia, on Aug. 4, 2020. AP

Meanwhile, some schools that have already reopened are being forced to close because students and staff are testing positive. In Cherokee County, Georgia, a second high school closed Wednesday. About 1,100 students and staff were in quarantine.

At schools in Muncie, Indiana, 200 were quarantined. In southern Mississippi, almost 100 students were sent home this week after coming into contact with a teacher exhibiting COVID-19 symptoms.

Meanwhile, there were packed hallways on the first day at a school in Evansville, Tennessee, and about 800 students showed up for in-person learning at Westminster Academy in Fort Lauderdale.

In New Jersey, where classes were supposed to be held in person, hundreds of teachers said they won't go back, which forced Governor Phil Murphy to say he would no longer require school districts to offer in-person learning.

"If a school district does not feel at this point that they are not prepared to open with the health and safety protocols, we'll work with them," said Murphy.

The decision to allow districts to offer remote only-learning comes after more than 400 teachers filed for medical exemptions in Elizabeth, New Jersey.

"How will you keep the mask on a little 6-year-old?" first-grade teacher Marie Tichenor asked.

Tichenor said she applied for a medical exemption because her husband is immunocompromised.

"What do I do if a child cries and needs their shoe tied?" she asked. "How do I respond and say, 'I can't help you, I can't comfort you, because we need to be 6 feet apart.'"

There is some hope for students and parents seeking a return to school. The U.S. has announced that it will purchase 100 million doses of Moderna's experimental vaccine, which is currently in late-stage human trials. CBS News medical contributor Dr. David Agus said government contracts have been given to other vaccine makers as well.

"By doing this at-risk manufacturing, it is taking off months — many, many months — of development. So as soon as we have the data, we can start vaccinating," said Agus.

Rostov will reject the offer of Genoa for Shomurodov, as they want more than 8 million euros (SE)
Mendes earned about 20 million euros during the summer transfer window
Carragher on Arsenal: Liverpool are a few years ahead, but Arteta can take them to the Champions League
Roma is the favorite in the fight for Jovic. Real Madrid have offers from Inter and Milan
Ruben Dias has arrived in Manchester to complete his move to city
Van Dijk's transfers are the key to Liverpool's victory. They killed any attempts of Arsenal to press
Tony Adams: Leno is not a top-4 goalie. For me, Martinez was number one
Source https://www.cbsnews.com/news/states-weigh-reopening-schools-as-coronavirus-outbreaks-spike/

Grand jury recording in Breonna Taylor to be made public

A Military 1st: A Supercarrier Is Named After An African American Sailor

Debates don’t matter. Unless someone face-plants.

How Coal-Loving Australia Became the Leader in Rooftop Solar

With Fancy Footwork, a Dancer’s Home Doubles as a Studio

A Narnia-Inspired Design, on Long Island