A SpaceX rocket is scheduled to blast off Wednesday afternoon from Kennedy Space Center, carrying a Dragon capsule with NASA astronauts Doug Hurley and Bob Behnken to the International Space Station. It will be the first time astronauts launch from Florida in nine years and a first for a private company.

The manager of NASA's commercial crew program, Kathy Lueders, said everything was progressing well — at least on the ground.

“Now the only thing we need to do is figure out how to control the weather,” she said Monday evening as rain continued to drench the area. “We're continuing to be vigilant and careful and make sure we do this right.”

Forecasters put the odds of acceptable launch weather at 40%. But that doesn’t include the conditions all the way up the U.S. and Canadian coasts and across the sea to Ireland — a complicated mix of measurements unique to the Dragon crew capsule. 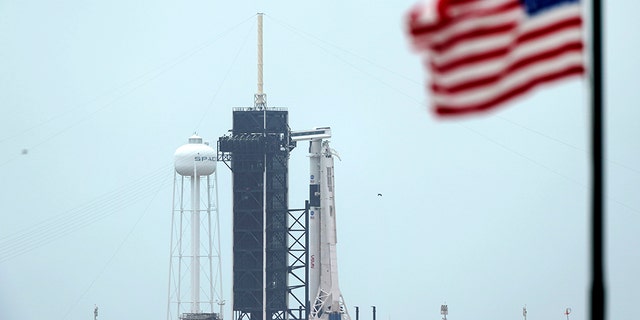 The SpaceX Falcon 9, with the Crew Dragon spacecraft on top of the rocket, sits on Launch Pad 39-A Monday, May 25, 2020, at Kennedy Space Center, Fla. Two astronauts will fly on the SpaceX Demo-2 mission to the International Space Station scheduled for launch on May 27. (AP Photo/David J. Phillip)

The Dragon’s emergency escape system can kick in, if necessary, all the way to orbit. If that happens, the capsule will need relatively calm wind and seas in which to splash down.

SpaceX will have at least two recovery ships deployed off Florida, and NASA will have two military cargo planes ready to take off. Additional planes will be stationed in New York and England to assist with a potential water rescue, according to Lueders.

Hans Koenigsmann, a vice president for SpaceX, said the launch control team will incorporate global weather patterns and models to determine whether it's safe to launch.

“If the weather gods are working with us," he said, liftoff will occur at 4:33 p.m. SpaceX has a split-second launch window.

The good news is that the tropical weather headed toward Cape Canaveral should be gone in a couple days, with conditions also improving up the Eastern Seaboard later in the week.

If SpaceX doesn't launch Wednesday, its next attempt would be Saturday.

Pep Pro Champions League: Real Madrid will knock us out if Manchester City are thinking about the next stage
Quique Setien: Barcelona can keep their title chances until the last round. A lot of things happen in football
Klopp confirmed that Henderson is out for the rest of the season due to injury
Pep on Manchester City's appeal to CAS: Confident in the club's arguments that we will be in the Champions League
Ronaldo remembered winning Euro 2016: it was the most important title of my career🏆 🇵 🇹
It is impossible to beat Ramos' penalty (there is only a Subasic save with a violation), but we know how he will hit next time
Real Madrid Director Butragueno: it will be difficult to Beat city. This is a team with fantastic players
Source https://www.foxnews.com/science/stormy-weather-threatening-delay-of-spacexs-first-astronaut-launch-on-wednesday

The Catholic Church raked in $1.4 billion in coronavirus loans

Sassy 4-year-old explains how not to talk to girls

Who Is Darin Olien on Zac Efron’s ‘Down to Earth’ Netflix Show?

Helen Hunt is mad about this little black bikini

Naya Rivera disappearance: What we know

Is it safe to try on clothes at stores during the coronavirus pandemic?

Nick Cordero's baby kissed video of him on phone

Serbia’s leader not worried about losing power amid protests

Trump Believes Biden Has Been ‘Brainwashed’ by Democrats

‘This Is Not a Boring History of Nagging Spinsters’

Why heat waves and Covid-19 can be a dangerous combination

4 children die when semi slams into car on Indiana highway

How ICE Helped Spread the Coronavirus

Exclusive | Namit Das birthday special: Here's why he got emotional and teary-eyed on his 25th birthday