At the last summer Olympics, Allyson Felix and Shaunae Miller-Uibo dueled down the final stretch of the 400 meters. In a photo finish, Miller sprawled across the finish line to win the gold medal by seven-hundredths of a second.

They will race again on Thursday at a much greater distance in the Inspiration Games, the latest and most elaborate attempt to stage a virtual track and field meet during the coronavirus outbreak. Organizers of the Weltklasse Zurich, a prestigious one-day meet that has been canceled this year because of the pandemic, are staging the event.

Separated by two lanes in Rio in 2016, Felix and Miller-Uibo will now be thousands of miles apart for their 150-meter race, which also includes Mujinga Kambundji of Switzerland. When Felix lines up in Walnut, Calif., Miller-Uibo will do so in Bradenton, Fla., and Kambundji will toe the line in Zurich.

Twenty-eight athletes will compete in eight disciplines at seven different tracks in Europe and the United States. Some of the events are seldom-contested distances — including the 300-meter hurdles, 100 yards, and 3x100 meter relay — chosen to take the pressure off athletes who might be far from their top form in their usual events.

“I’m the type of athlete who does better in a situation where I’m racing against someone,” Felix, a six-time Olympic gold medalist from the United States, said in a teleconference this week.

“I feel like I rise to that occasion and feed off that so I think this will definitely be challenging to be out there by myself. Essentially it’s a time trial, but I love challenges and am always looking for a new goal, so this will be something different to accomplish.”

Using satellites and synchronizing technology, organizers will start each of the three participants simultaneously with digitally controlled starting guns. Races will be broadcast with a two-minute delay to account for the lag in transmission to the broadcast center in Zurich, which will synchronize the television images from all three venues and use a triple split screen.

No spectators will be allowed at most of the sites, but 300 officials and volunteers are expected to attend at Letzigrund Stadium in Zurich.

“One choice you have is to stick your head in the sand, but the other is to ask what is possible,” said Stefan Koch, an executive with the host broadcaster, SRF. “We can do something, so let’s do whatever is possible right now.”

Track and field has indeed taken an innovative approach during the pandemic, which has disrupted the regular schedule and caused the 2020 Tokyo Olympics to be postponed until 2021.

In early May, Renaud Lavillenie, the French pole-vaulter and former world-record holder, created a virtual competition between men’s pole-vaulters largely because the world’s three leading competitors — Lavillenie, Mondo Duplantis and Sam Kendricks — all had training facilities in their backyards. 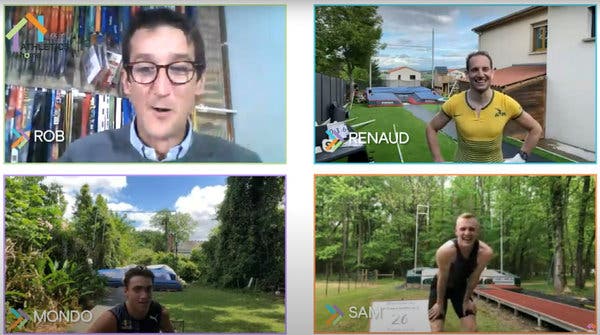 A three-way virtual duel between Renaud Lavillenie, Mondo Duplantis and Sam Kendricks was held in early May. The event was filmed with cell phone cameras.Credit...Reuters

“Renaud came up with the idea, and our staff ran with it and made it happen on a tiny budget at a time when sport was shut down around the world,” said Sebastian Coe, president of World Athletics, the sport’s international governing body, in an email. “I am heavily in favor of innovation in our sport, and modern technology has enabled us to find new and inventive ways to stage competition this year.”

There have been similar events since for women’s pole-vaulters and for decathletes.

On June 11, organizers of the Bislett Games, the canceled Diamond League meet in Oslo, staged an alternative event without spectators: the Impossible Games.

Karsten Warholm, the Norwegian star, ran on his own in the rarely contested 300-meter hurdles and broke the world record. His shouts of delight reverberated through the nearly empty Bislett Stadium.

In the most avant-garde event of the evening, a team of five Norwegians in Oslo raced a virtual 2,000 against a team of five Kenyans in Nairobi. While the Norwegians, led by the three Ingebrigtsen brothers, raced live, the Kenyans’ race was prerecorded and they actually ran twice.

The French newspaper L’Équipe reported from Nairobi that when the Kenyans’ first effort on June 9 was a disappointing five minutes, 3.71 seconds, local officials cited a problem with the timing system and had the runners return to try again the following day.

The weather had worsened by then, however, and the Kenyans’ second attempt was made in driving rain and much cooler temperatures. Their time of five minutes, 3.05 seconds was only a slight improvement.

But the split-screen television images of them running in a downpour while the Norwegians raced on a clear night in Oslo made for quite a contrast.

More disparities could surface during the Inspiration Games. Of the eight events, only the 100-yard race will have all three competitors in the same location with Andre De Grasse, Jimmy Vicaut and Omar McLeod running directly against each other in Bradenton, Fla.

The other events could offer up a wide range of wind and weather conditions across the different locations as runners compete for $10,000 for first place, $6,000 for second and $4,000 for third.

“It will not be really 100 percent comparable of course,” said Andreas Hediger, one of the meet directors. “In one stadium there probably will be a tailwind and in another venue maybe a headwind. But it will give a lot of topics to discuss for commentators and other experts. We will have Swiss timing in every venue, and there will be a ratifiable result for each athlete at the venue. We have photo finish and wind gauges.”

What remains unclear is whether virtual events like these will have a future in a post-pandemic world.

Hopefully, Thursday’s event will all function more seamlessly than Tuesday’s teleconference call in which De Grasse and the sprinter Noah Lyles were unable to connect.

“Nothing will ever replace the magic of live athletics in a crowded arena,” Coe said. “But I hope that some of the unique formats we have tried in the last few months will offer meeting directors and our member federations some alternative ways of holding competition in challenging times, and even in times of greater normalcy.”

For the time being, normalcy remains very elusive.

“Athletes need to stay healthy,” Koch said. “Even if they are allowed to travel, I’m afraid many of them may not want to.”

Manchester City wants to buy 5 more players this summer. The club is Interested in Lautaro and Felix
West ham midfielder Antonio is the best player in the Premier League in July. He scored 8 goals in 7 matches
Brih is scheduled for the Manchester City – Real Madrid match. Zweier will judge the Juventus-Lyon game
Fulham returned to the Premier League, earned 135 million pounds and destroyed the fairytale of Brentford. Everything was decided by the trick of the defender and a stupid mistake of the goalkeeper
Fabinho: this Liverpool will be remembered forever. The title in the Premier League is special, because we had to wait so long
Tuchel asked PSG to buy Alaba from Bayern. The player wanted to receive 20+ million euros a year
Messi-Casillas: you are an incredible goalkeeper. It was a beautiful rivalry that made you overcome yourself
Source https://www.nytimes.com/2020/07/09/sports/six-feet-try-seven-separate-tracks.html

Wanted: Young People To Work The Polls This November

Americans Back Trump On Immigration — But Only To Stop COVID-19, Poll Finds

If Public Schools Are Closed, Should Private Schools Have to Follow?

Is TikTok a Good Buy? It Depends on What’s Included

Trump and the Republicans Are Risking an All-Out Depression

So You Want to Volunteer in a Coronavirus Vaccine Trial

Business Interrupted by the Pandemic? Your Insurance Is No Good

Will Bill Barr Try to Help Trump Win the Election?

COVID-19 may have lasting effects on some children's brains