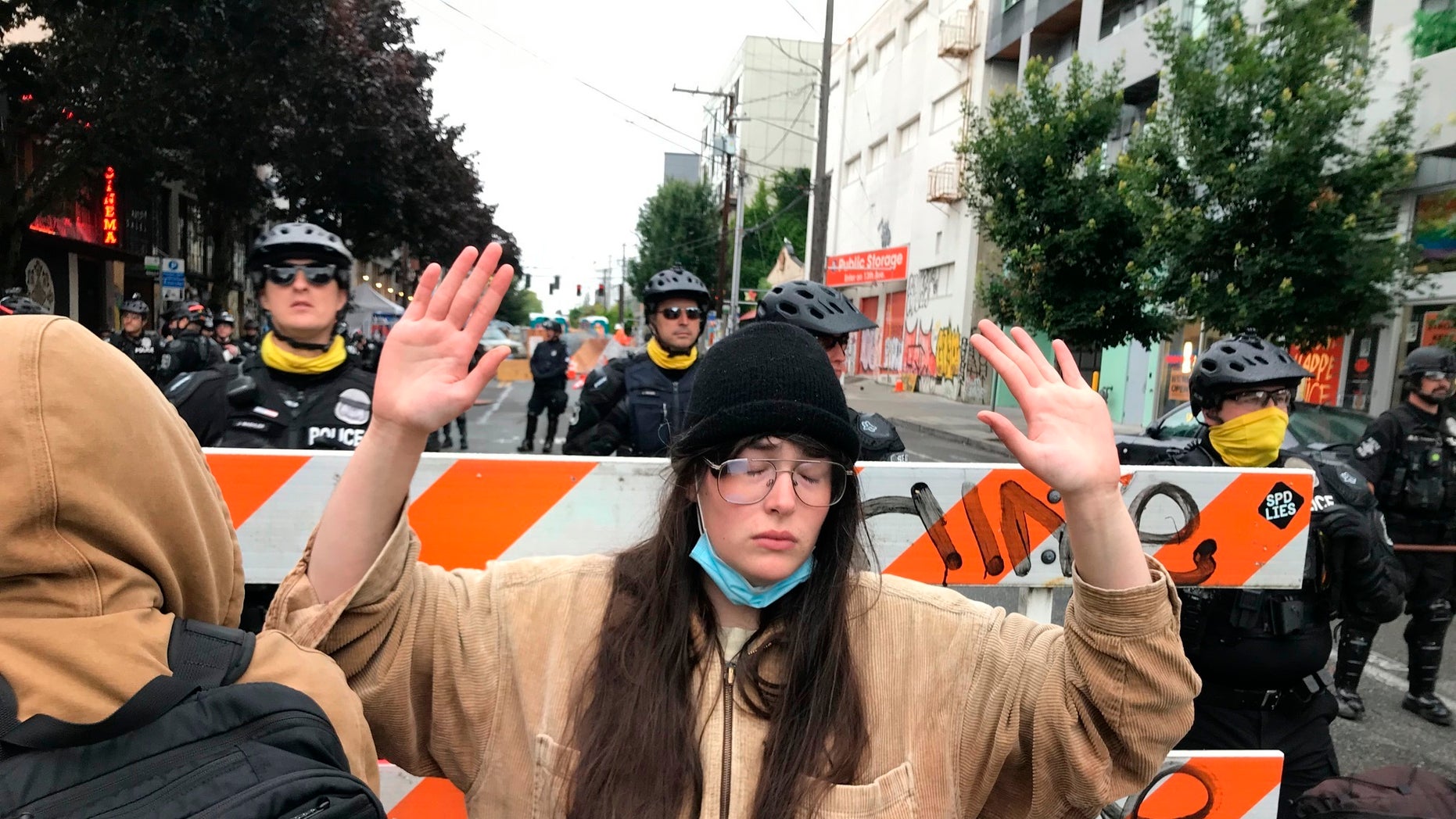 Good morning and welcome to Fox News First. Happy Fourth of July Weekend! Here's what you need to know as you start your day ...

Police issued the order to disperse around 5 a.m. local time on Wednesday and told protesters to leave within eight minutes. At least 31 protesters were arrested for failure to disperse, obstruction, resisting arrest, and assault, police said.

“Our job is to support peaceful demonstration but what has happened on these streets over the last few weeks is lawless and it’s brutal and, bottom line, it is simply unacceptable,” police Chief Carmen Best told reporters from inside CHOP.

The East Precinct stationhouse, which police abandoned last month following standoffs and clashes with demonstrators, was cleared of protesters, Best said. She added that police were not moving into the building yet.

Durkan’s executive order came after a series of late-night shootings killed two people and seriously wounded three others in the area. Police said other violent crimes have been documented within the zone since demonstrators took over several blocks in the Capitol Hill neighborhood last month.

“Officers enforcing today's order are wearing a higher level of protective gear,” police said. “Police are utilizing this equipment because individuals associated w/the CHOP are known to be armed and dangerous/may be associated with shootings, homicides, robberies, assaults & other violent crimes.” Click here for more on our top story.

The City Council passed a budget Tuesday that includes $837 million in cuts and transfers to the NYPD expense budget, which removes $1 billion from the department's spending when combined with associated costs.

He added: “Send that message to Mr. Trump, ‘Black Lives Matter,’ excessive force has to stop. Using the National Guard to stop protesters has to stop. ... Tell every police department in the United States of America enough is enough. Great. Great. Great.

The budget cuts and transfers to the NYPD were far less than what some protesters had demanded. Rep. Alexandria Ocasio-Cortez, D-N.Y., said earlier that $1.5 billion in cuts would not be enough. Click here for more.

“Congratulations on a really great win!” Trump tweeted. The president's message linked to a May post from her Twitter account where she described herself as a tough fighter against socialism and advocate for the Second Amendment.

“I refuse to send my children into a socialist nation," the mother of four said. "Their freedom IS my motivator! Threaten the liberty of Americans, and I’ll be there to hold you accountable! #USHouse #CO03 #HELLNObeto @BetoORourke.”

Boebert -- owner of Shooters Grill in Rifle, Colo. -- had confronted and questioned former U.S. Rep. Beto O'Rourke of Texas, when he was a Democratic presidential candidate, on suggestions he made regarding confiscating guns.

She told Fox News in an interview at the time that she drove for three hours to see O'Rourke with her "Glock on her hip" and told him: "'Hell no, you're not going to take our guns.'"

She will run in November's general election against Diane Mitsch Bush, who won the Democratic nomination Tuesday after defeating James Iacino. Click here for more.

THE LATEST FROM FOX BUSINESS
- Job growth expected to continue in June
- Trump tells FBN he supports stimulus payments larger than $1,200 in the next stimulus bill
- Congress passes extension of relief program for COVID-impacted businesses

#TheFlashback: CLICK HERE to find out what happened on "This Day in History."

Tucker Carlson says colleges are struggling during the pandemic, adding that if you are going to pay for college this fall, consider sending an email to the financial aid office, "There is absolutely no reason that you should be paying 70 grand a year, all in, to send your kid to a reeducation camp."

Not signed up yet for Fox News First? Click here to find out what you're missing.

Fox News First is compiled by Fox News' Bryan Robinson. Thank you for making us your first choice in the morning! Stay safe, stay healthy, and try to stay positive -- we'll get through these hard times together as a nation. Enjoy your Fourth of July weekend and we'll see you in your inbox first thing Monday morning.

Liverpool are close to buying a defender for Olympiakos Tsimikas. Medical check-up-this week
Barcelona intends to sign Bernardo Silva. City can get Semeda
Real are planning to buy Dybala and are ready to include Kroos or ISCO in the deal (Sport Mediaset)
Conte about Inter before the 1/4 Europa League: we Continue to progress, we become stronger
Piontek is Interesting to Fiorentina. Herta wants just over 20 million euros
Barzagli or Grosso will replace Pirlo in Juventus U23
Daudov about Akhmat: I am Sure that the team will Interact better with each new game
Source https://www.foxnews.com/us/seattles-chop-cleared-police-precinct-recovered-multiple-protesters-arrested

This is what distance learning should look like in the fall

Australia's oldest micronation, Hutt River is no more thanks to Covid-19

Australia's oldest micronation is no more thanks to Covid-19

Lyon the team to beat at Women’s Champions League finals

Black Activist Burnout: 'You Can't Do This Work If You're Running On Empty'

She Explains ‘Mansplaining’ With Help From 17th-Century Art

I Am the C.E.O. of Uber. Gig Workers Deserve Better.

Amazon Satellites Add to Astronomers’ Worries About the Night Sky

Stephen Hahn, F.D.A. Chief, Is Caught Between Scientists and the President

Start-Ups Braced for the Worst. The Worst Never Came.

I Have a Cure for the Dog Days of Summer

'Time for innovation': How tutoring could be a key to lifting kids out of 'COVID slide'

A Rare Economic Bright Spot in the U.S. Health System: The Vet’s Office

The Trauma of Caring for Coronavirus Patients

What’s Up With the Mail?

Amazon is hiring for its first D.C.-area Go Grocery stores. Other postings suggest more are to come.

60% of Sturgis residents were against a motorcycle rally that brings in thousands but the city approved it. Here's why

The 7 Types of Financial Procrastinators: Which One Are You?

Adults may not be the only Covid 'long haulers.' Some kids still have symptoms, months after falling ill

Some kids still have Covid-19 symptoms, months after falling ill

This is why Disney World rarely has power outages

NGOs say 7 aid workers are among victims of Niger attack

How parents can prepare for students’ virtual return to school

Belarus’ leader wins sixth term with over 80% of votes

The man Google loves to hate