Sanders calls for 'registry of disreputable federal law enforcement officers,' releasing half of all US prisoners

Just days after a Texas Immigration and Customs Enforcement (ICE) facility was shot up in what the FBI called a "targeted attack," Bernie Sanders unveiled a sweeping new plan on Sunday that would create a "registry of disreputable federal law enforcement officers," and provide "financial support" for similar lists at the state level.

Sanders' proposal would also "ban the prosecution of children under the age of 18 in adult courts" for all offenses, apparently including even rape and murder, and would prohibit youth from ever facing prison time for misdemeanors.

The plan additionally would seek to cut the total "incarcerated population in half" by getting rid of what Sanders' campaign called "excessive sentencing."

The unprecedented crime reform initiative comes as ICE officers and workers are also facing a rapidly escalating series of death threats, including protesters menacing their children and shots being fired at their offices several times in the past month, amid a rising tide of anti-ICE rhetoric from the left fueled by congressional Democrats, media voices and presidential hopefuls.

Earlier this month, Democratic Rep. Joaquin Castro drew bipartisan condemnation for posting the names of several individuals and businesses who donated to President Trump's campaign, including individuals who also had donated to Castro. The episode underscored fears that federal registries can be abused for intimidation purposes.

The lengthy plan offered few details and appeared to contradict itself at points. For instance, the plan stated it would "end solitary confinement," calling it a form of "torture."

But, later in the document, Sanders' campaign said it would specifically ban "solitary confinement for youth."

Sanders' freewheeling proposal also doubled down on his previous calls to allow any incarcerated felon -- including the Boston Marathon bomber and those convicted of sexual assault -- the right to vote.

"All voting-age Americans must have the right and meaningful access to vote, whether they are incarcerated or not," the plan read. "We will re-enfranchise the right to vote to the millions of Americans who have had their vote taken away by a felony conviction."

Also under Sanders' initiative, marijuana would be legalized at the federal level, "three-strikes" laws would be erased from the books, and solitary confinement would become a thing of the past.

"Legalize safe injection sites and needle exchanges around the country, and support pilot programs for supervised injection sites, which have shown to substantially reduce drug overdose deaths," the plan stated.

'WE KNOW WHERE YOU SLEEP AT NIGHT': ICE AGENTS TARGETED BY LEFT-WING TERRORISTS

To sweeten the pot, the proposal would also "enact a federal jobs guarantee to provide good jobs at a living wage revitalizing and taking care of the community," with a $15 minimum wage.

Sanders' campaign did not immediately respond to Fox News' request for comment.

In July, Sanders announced he would cut his own staffers' hours so that they can effectively be paid a $15-an-hour minimum wage, prompting mockery from critics who say the move is more evidence that Sanders' plan to raise the national minimum wage is hypocritical and would only lead to less work and more unemployment.

Attacks on law enforcement are poised to become a pivotal issue in the 2020 presidential campaign. At a fiery rally in Manchester, N.H., last Thursday, President Trump said recent episodes in which people threw water on New York City police officers were indicative of a larger trend among progressives. 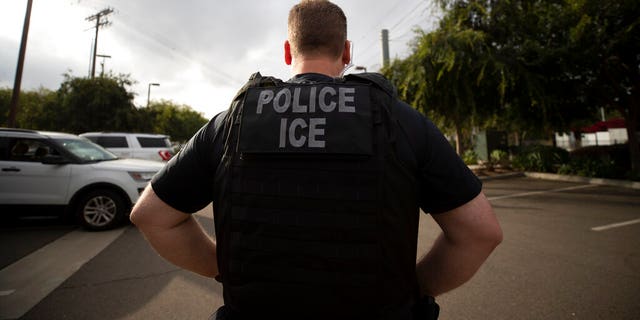 FILE - In this July 8, 2019, file photo, a U.S. Immigration and Customs Enforcement (ICE) officer looks on during an operation in Escondido, Calif. Advocacy groups and unions are pressuring Marriott, MGM and others not to house migrants who have been arrested by U.S. Immigration and Customs Enforcement agents. But the U.S. government says it sometimes needs bed space, and if hotels don’t help it might have to split up families. (AP Photo/Gregory Bull, File)

"They view everybody as fascists and Nazis ... They accuse our heroic border agents of running concentration camps," Trump said, in an apparent reference to New York Rep. Alexandria Ocasio-Cortez. "And, they look down upon the hardworking citizens who truly make our country run."

Footage published Tuesday by Breitbart News shows protesters in Florida from groups such as Never Again Action and Black Lives Matter Alliance of Broward County threatening workers and former employees of the GEO Group, a private contractor used by ICE.

“We know where you sleep at night,” one protester shouted. “We know what kind of dog food you buy your dogs.”

Last month, a man was killed by Washington state authorities when he threw incendiary devices at both an immigration center and nearby propane tanks. In Colorado, protesters demonstrating outside an ICE facility replaced the American flag with the Mexican flag. Also last month, protesters were arrested after trying to storm an ICE building in Washington, D.C.

“The environment where we're demonizing our law enforcement for doing their jobs and enforcing the law on the books is concerning,” he said. “It can be dangerous and it can result in people taking action that are not supported by facts that are not in response to anything inappropriate that the men and women of ICE are doing and we've got to tone that down."

President Trump has called The First Step Act, his signature bipartisan criminal justice reform package, one of the major successes of his presidency. Fox News exclusively reported in July that more than a hundred violent criminals and sex offenders have been released under the First Step Act, according to data from an administration official.

The data, first obtained exclusively by "Tucker Carlson Tonight," seemingly contradicted promises from lawmakers and the White House that the legislation would largely affect only prisoners sentenced for minor drug-related offenses. Of 2,243 inmates released under the First Step Act, only 960 were incarcerated for drug-related offenses.

US-Taliban peace deal: India to attend historic ceremony along with 30 other countries in Doha

NYCFC will have to play at Red Bull Arena again

A St. Louis officer pleads guilty to killing a female colleague while they played with a gun

US-Taliban peace deal: Afghans hope for peace as they gear up for troop withdrawal deal today

The Week On The Hill: Congress tries to get past partisanship to address coronavirus

US ‘Concerned’ by Arrest of Hong Kong Publisher

US official calls coronavirus a 'pandemic'

US military scrambles to cope with global 'threat' posed by coronavirus

US military scrambles to cope with global virus 'threat'

The big question facing Democrats (and independents): Who to vote for

As virus spreads, other countries can learn from China

The New-Meets-Old Apartments in This Converted Church Are Divine

What We’ve Learned From Renovating Hundreds of Bathrooms

Who Says Your Bathrooms Have to Look the Same?

What to Read This Spring, Depending on Your Mood

Hundreds of Indonesian Former IS Members, Families Could Become Stateless