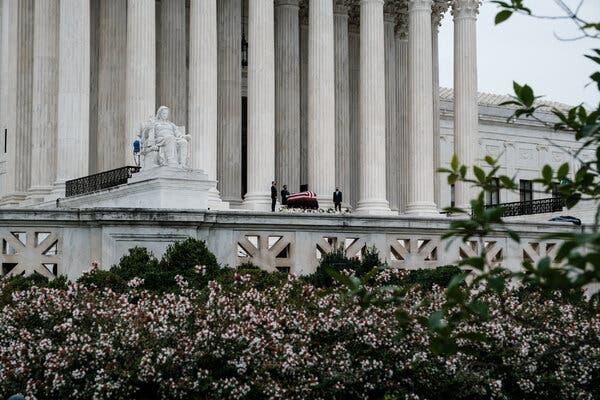 Justice Ruth Bader Ginsburg lay in repose on Thursday at the Supreme Court.Credit...Michael A. McCoy for The New York Times

Justice Ruth Bader Ginsburg will break one final barrier on Friday, becoming the first woman and the first Jewish American to lie in state in the United States Capitol.

The honor, arranged by Speaker Nancy Pelosi, as well as a private ceremony honoring her at the Capitol, will bring to a close a week of public memorials for Justice Ginsburg, the liberal jurist and trailblazer for women who died last Friday at 87. Her family plans to hold a private burial next week at Arlington National Cemetery.

Like Wednesday’s memorial at the court, the honors beginning at 10 a.m. Friday at the Capitol were expected to be brief and mostly limited to family and a small contingent of lawmakers. Former Vice President Joseph R. Biden Jr., the Democratic presidential nominee, and his wife, Jill Biden, were among the dignitaries expected to pay their respects on Friday.

Ms. Pelosi, the first female speaker, planned to deliver remarks honoring Justice Ginsburg. Rabbi Lauren Holtzblatt of Adas Israel Congregation in Washington, who eulogized her at the Supreme Court on Wednesday, will also deliver a reflection. And in a nod to Justice Ginsburg’s love of opera, the mezzo-soprano Denyce Graves was scheduled to sing.

Members of the House and Senate will then be invited to pay tribute a few at a time — a precaution made necessary by the coronavirus pandemic — as Justice Ginsburg lies in state.

The first viewing slots were reserved for the women serving in Congress, and later, Democratic and Republican women were to gather on the steps of the Capitol as her coffin is carried out.

Only about 30 Americans have received the honor of lying in state at the Capitol — including presidents, military leaders and members of Congress — all of them men. Rosa Parks, the civil rights icon, is the only other woman granted a similar honor, but as a private citizen, she lay “in honor.”

Justice Ginsburg was to lie in the National Statuary Hall on the House side of the Capitol, where Democrats are in control. Many dignitaries have lain in state in the Capitol Rotunda, between the House and Senate, but both chambers must agree and pass special legislation to allow it. 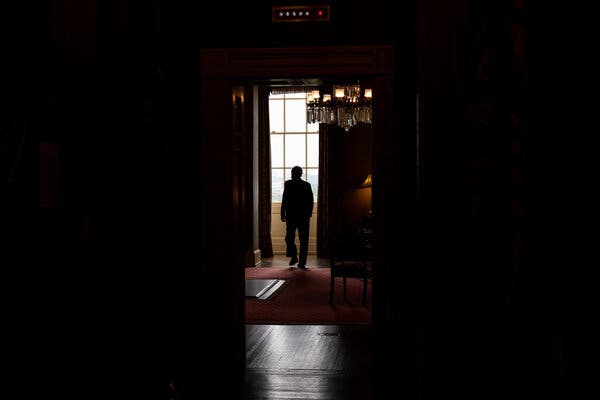 Senator Mitch McConnell, Republican of Kentucky and the majority leader, on Thursday at the Capitol.Credit...Erin Schaff/The New York Times

As the Democratic House prepared to celebrate Justice Ruth Bader Ginsburg’s life and legacy, White House officials and Senate Republicans busied themselves on Friday with preparations of their own to usher in a conservative successor to the court with remarkable speed.

In Washington, mourning has its limits when power is at stake. In this case, with the promise of a six-to-three conservative majority on the court in reach, Republicans were aiming for a vote before Election Day, just over a month away.

President Trump was expected to name his nominee at a ceremony at 5 p.m. Saturday. Senators and presidential advisers widely expected him to choose Judge Amy Coney Barrett of the United States Court of Appeals for the Seventh Circuit, the preference of anti-abortion conservatives.

Democrats were fiercely opposed to filling the seat at all so close to Election Day, especially after Republicans refused to consider a liberal nominee put forward by President Barack Obama in 2016 because they said voters should have a say in an election year. Democrats were prepared to make a case that Judge Barrett in particular was too far to the right, posing a threat to abortion rights and the Affordable Care Act.

But with a 53-to-47 majority in the Senate, Republicans had the votes they needed to press ahead anyway. Senator Lindsey Graham, Republican of South Carolina and the chairman of the Judiciary Committee, planned to announce on Saturday that he would hold confirmation hearings as soon as Oct. 12 and aim to confirm the president’s nominee before the end of October, according to people familiar with his thinking who were not authorized to discuss it.

If all went according to plan, that would allow a new justice to be seated before the court would hear any election-related cases, and before a major November hearing on the legality of the health care law, which the Trump administration is pressing to overturn.

President Trump and Melania Trump, the first lady, viewing the coffin of Justice Ruth Bader Ginsburg outside the Supreme Court on Thursday.Credit...Michael Reynolds/EPA, via Shutterstock

President Trump was jeered by protesters on Thursday morning as he paid his respects to Justice Ruth Bader Ginsburg, standing silently by her coffin at the top of the Supreme Court steps as a vigorous chant of “Vote him out!” erupted on the street below.

Wearing a face mask — unusual for him — and a blue tie instead of his trademark red power tie, Mr. Trump stared ahead and closed his eyes at times near the justice’s flag-draped coffin.

But the quiet of the moment was punctured by the loud boos and shouts of demonstrators about a block away. Along with the chant of “Vote him out!” were calls of “Honor her wish!” — a reference to Justice Ginsburg’s reported deathbed request that her replacement not be confirmed until a “new president is installed.”

It was not clear whether Mr. Trump and the first lady, Melania Trump, who joined him for a visit of less than two minutes, could hear the heckling, which was clearly audible on television.

Asked later in the day about the jeering, Mr. Trump said he could “hardly hear it.”

“Somebody said there was some chanting, but they were right next to the media,” he told a reporter. “But we really could hardly hear too much. We heard — we heard a sound, but it wasn’t very strong.”

“The chants were appalling, but certainly to be expected when you’re in the heart of the swamp,” she said. “I thought it was an appalling and disrespectful thing to do, as the president honored Justice Ginsburg.”

Mr. Trump has angered many supporters of Justice Ginsburg by quickly announcing that he would nominate a new conservative justice to succeed her before the election in November, and by questioning, without evidence, whether her “dying wish” that another president appoint her replacement was real or concocted by top Democrats.

Lopetegui on the win over Rennes: Sevilla played almost perfectly
Danilo about 0:2 with Barca: Juventus played organized, but not aggressive enough
Tuchel on neymar's adductor muscle injury: I hope it is not serious
Jaydon Sancho: Zenit made us work hard, but Borussia managed to score
Frankie de Jong on the defender's role against Juve: Always ready to play where Barcelona need to play
Rashford with 4 goals led the race of scorers of the season Champions League
Holand scored the most goals (12) in the first 10 matches in the Champions League
Source https://www.nytimes.com/live/2020/09/25/us/ruth-bader-ginsburg-lie-in-state-live-updates

NFL Week 8 Predictions: Our Picks Against the Spread

How Nas inspired Jalen Rose to embrace his flaws

Ingraham: Biden 'wants America to be permanently defined and changed' -- and will use COVID-19 to do it