Buried deep in “The Old Guard,” Gina Prince-Bythewood’s swift, somber action-thriller, is an image to file under my worst nightmares and probably yours too: A captive named Quynh (Van Veronica Ngo) is locked inside a giant suit of armor, weighed down with chains and thrown into the ocean. It would be an unspeakably awful fate for anyone, but it’s even more so for Quynh, whose body miraculously self-regenerates after every scrape, every wound and, yes, every death. Trapped on the ocean floor for decades that become centuries, she drowns, revives, drowns again and revives again, her water-clogged screams a terrifying reminder that there are punishments infinitely worse than death.

That’s one of many hard truths that linger amid the whizzing bullets and slashing blades of “The Old Guard,” a pleasurably human-scaled movie about what it means to be superhuman. Does your heart sink at the last part of that description — or at the fact that this Netflix release was adapted from a series of graphic novels? I sympathize, but rest assured: While the comic-book-inspired superhero saga may be Hollywood’s most exhausted subgenre, mindless repetition is the last thing on Prince-Bythewood’s mind. Always good at infusing traditional material with emotional conviction and sly political purpose (“Love & Basketball,” “Beyond the Lights”), she here turns the very notion of overkill sneakily on its head.

The protagonist here isn’t Quynh but another powerful, deathless fighter named Andromache the Scythian, which must be fun to sign in autographs — or it would be if Andy, as she sensibly calls herself, weren’t so intent on staying incognito. Superbly played by Charlize Theron with the same regal ferocity she brought to “Mad Max: Fury Road” and “Atomic Blonde,” Andy is essentially the world’s oldest person: We see her in brief flashbacks to distant centuries, rocking a jeweled headdress and a heavy Boudicca vibe. These days, though, she favors a short black bob of hair and a wardrobe to match, the better to slip undetected through the shadows of history.

Andy leads a small, tough and very handsome team of fellow immortals who have intervened with quietly deadly force in some of humanity’s most momentous skirmishes. It took them a long time to find each other. Booker (Matthias Schoenaerts) served alongside Napoleon back in 1812. Nicky (Luca Marinelli) and Joe (Marwan Kenzari) once fought each other in the Crusades but have since become lovers. They haven’t shaken off all their ancient habits — swords remain among their weapons of choice — but they are ruthlessly efficient fighting machines, ready to kill and die and kill and die ad nauseam. 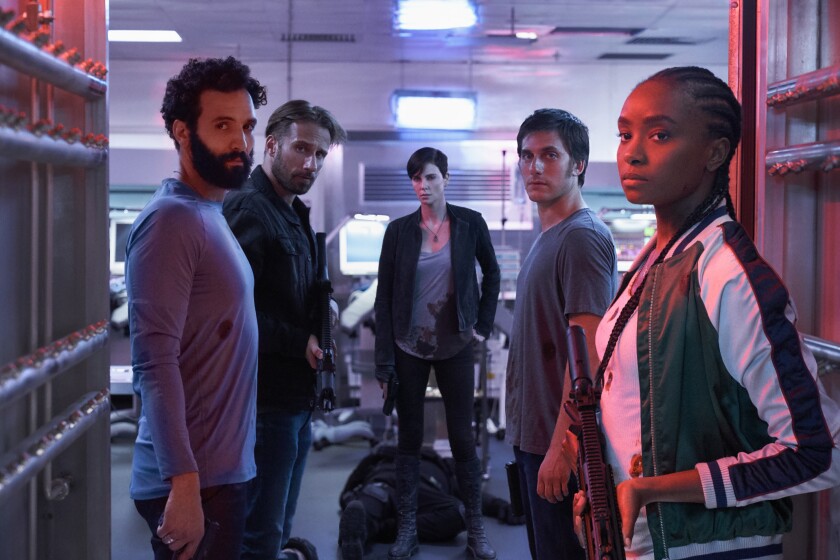 Turnover is low but not unheard-of, and fresh recruits don’t come along too often. But psychic visions have alerted Andy and her colleagues to a promising candidate named Nile (KiKi Layne, “If Beale Street Could Talk”), a tough young U.S. Marine stationed in Afghanistan. Not long after recovering from what should have been a fatal injury, Nile learns that the life she once knew is over and that she is now the newest member of Andy’s posse. She is cast, in other words, in a familiar enough movie role: the wary outsider through whose eyes we will discover the mysterious workings of an exclusive subculture.

Nile is a fast learner, as Layne’s sharp-eyed performance makes clear. And what she learns, mainly, is that immortality can be a real drag. It isn’t easy for a movie to suggest that this particular gift might be more curse than blessing, or that those who possess it might be uniquely valuable, and thus vulnerable, to their most powerful enemies. But “The Old Guard,” adapted by Greg Rucka from his and Leandro Fernández’s comic-book series, teases out these philosophical quandaries with wry wit, gallows humor and an often grisly sense of the absurd.

It also allows for some fascinating corporeal spectacle, as Prince-Bythewood lingers, with real tenderness and grim fascination, on the wondrous sight of burn scars gradually vanishing and bullet wounds healing themselves. But she and her grunting, grimacing actors also direct our attention to the characters’ more lasting psychological scars. You feel the accumulated trauma of their every wound, every death, every resurrection. You also feel the weight of their solitude: To avoid capture, Andy and her friends must spend most of their long lives in isolation, joining forces only once every few years to do battle with the forces of evil.

Their latest mission places them in contact with a past associate (Chiwetel Ejiofor) who may not have their best interests at heart. An insufferably smug pharmaceuticals CEO (Harry Melling) definitely doesn’t; he wants to harness their powers and invent a kind of invincibility-conferring super-drug. Twists and betrayals pile up, along with abductions, rescues and vertiginous set pieces. But while Prince-Bythewood keeps the story moving and orchestrates some excitingly dynamic action (nimbly shot by Tami Reiker and Barry Ackroyd), it’s clear that her fascination with this story is less visceral than existential. 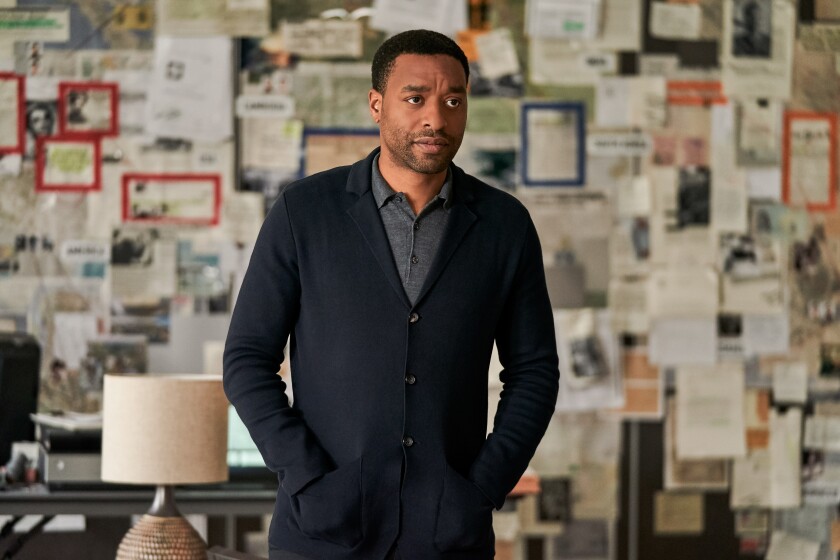 Chiwetel Ejiofor in “The Old Guard.”

As a tale of immortality and its discontents, “The Old Guard” has obvious points of connection with the vast canon of vampire lore and literature. Andy and Nile, with their moving if initially combative teacher-student rapport, might remind you a little of Anne Rice’s Lestat and Louis. Nicky and Joe’s romantic ardor, undimmed by the passage of time, brings back warm memories of Jim Jarmusch’s “Only Lovers Left Alive.” (That movie ended in Morocco, which is where this one begins.) At the same time, the relaxed banter and non-nuclear family dynamics evoke any number of blockbuster reference points, from the “Fast and Furious” movies to the extended Marvel and DC Comics fraternities. Perhaps the most obvious genre antecedent here is “X-Men’s” Wolverine, another hero cursed with self-healing properties.

“Just because we keep living doesn’t mean we stop hurting,” Booker says, a line that the soft-eyed Schoenaerts nearly rescues from banality. “The Old Guard,” though a good deal more interesting than some of the movies to which it will be compared, doesn’t entirely sidestep their weaknesses, among them on-the-nose dialogue, fuzzy backstory and a conveniently selective regard for human life. For all its thoughtfulness about the peculiar metaphysics of life and death, this is still a movie in which the heroes wind up killing an awful lot of anonymous henchmen — and unlike them, those henchmen stay dead.

There’s nothing particularly objectionable about this dynamic, which mirrors that of countless action movies in which the baddies are expendable and the good guys are for all intents and purposes invincible. We accept it for the same reason we accept a lot of these movies, because the characters are vaguely coded as a force for good in the world. It’s easy enough to believe that about Andy and her friends — the actors’ charm goes a long way — but you can’t help longing for a deeper understanding of who they are, the causes they’ve fought for, the regimes they’ve aided and resisted. I mean that as both criticism and compliment. It’s the rare superhero movie in 2020 that can leave you wanting to see more, closing-credits kicker and all.

Rated: R, for sequences of graphic violence, and language

Ignashevich Pro 1:1 with Spartak-2: torpedo has no problems with the structure of the game. But without blows there are no goals
Gattuso on Pirlo's appointment in Juve: All right, he got it. Being a player and a coach are different things
Sergi Roberto on the Barcelona-Bayern match: It will be like the final
David Silva has agreed a 3-year contract with Lazio for 9 million euros. He will leave the city for free
Mertens Pro 1:3 with Barca: after Langle's goal, Napoli forgot how to play
Muller before Barca: anything can happen in a match of this level
Mammana about moving to Sochi: I will Try to achieve a lot with this great club
Source https://www.latimes.com/entertainment-arts/movies/story/2020-07-08/the-old-guard-review-charlize-theron