Knud Merrild was just about the only avant-garde Los Angeles artist whose work was acquired by Louise and Walter Arensberg, the powerhouse collecting couple who moved from Manhattan to Los Angeles in 1921. In their jam-packed house in the Outpost foothills, a couple of blocks behind Sid Grauman’s pseudo-Chinese extravaganza of a movie theater on Hollywood Boulevard, a few modest examples of Merrild’s work would eventually be found.

Merrild (1894-1954) was an enigmatic artist who is hardly a household name today. Still, some of his small pictures were tucked in among the staggering array of not-quite-yet globally acclaimed masterpieces by the likes of Henri Matisse, Pablo Picasso, Piet Mondrian, Constantin Brancusi, Fernand Léger, Salvador Dalí, Giorgio de Chirico and scores more.

Perhaps most notable among them was Dada founder Marcel Duchamp, the Arensbergs’ favorite.

Merrild was a Danish-born expat. He had arrived in town a few years after the Arensbergs did and, like anyone with an interest in avant-garde art, gravitated to their home. 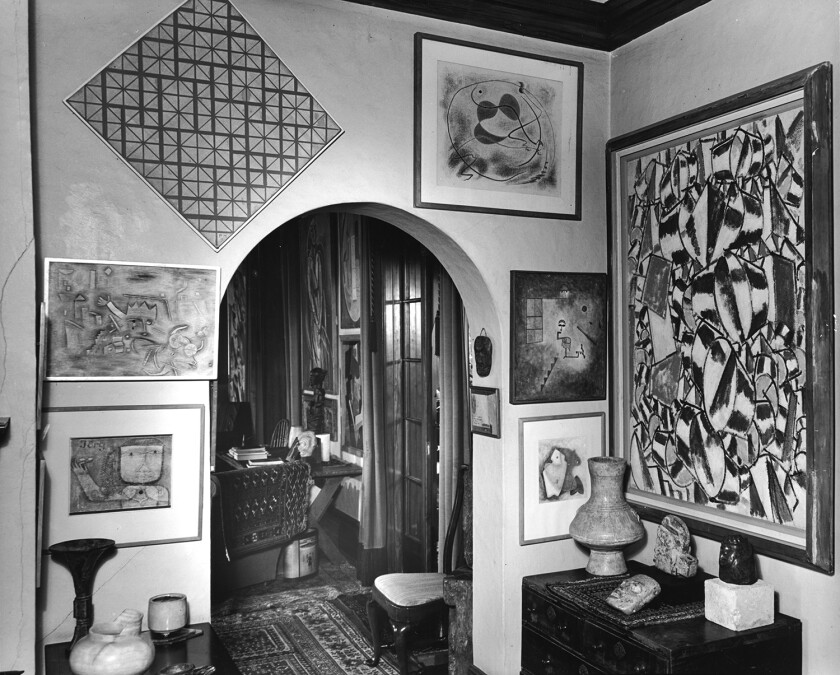 A small Surrealist abstraction by L.A. artist Knud Merrild is tucked below a Paul Klee painting and next to a large Fernand Léger canvas in the corner of the Arensbergs’ dining room.

His layered Cubist and Surrealist abstractions no doubt appealed to two of America’s most astute — and daring — collectors of Modern European art. (His friendship with the racy writer D.H. Lawrence no doubt helped.) Merrild would go on to develop an experimental technique that he called “flux painting,” an oils-and-water method that allowed fluid colors to ooze, spread and seek their own marbleized shapes.

Merrild tipped and turned the small works before the fluid colors dried, but the mixed paint also moved with independent, chemically induced alacrity. Beginning in 1942 and predating by a few years the radical drip paintings of Janet Sobel and Jackson Pollock, the flux compositions owe much to the mysterious vagaries of chance.

I’ve long wondered what might have inspired such a radically inventive approach to painting. Now there’s a robust clue: A terrific new book from Getty Publications displays the nearly 1,000 works in the Arensbergs’ collection in a way we’ve never seen before: room by room, wall by wall, tabletop by tabletop. 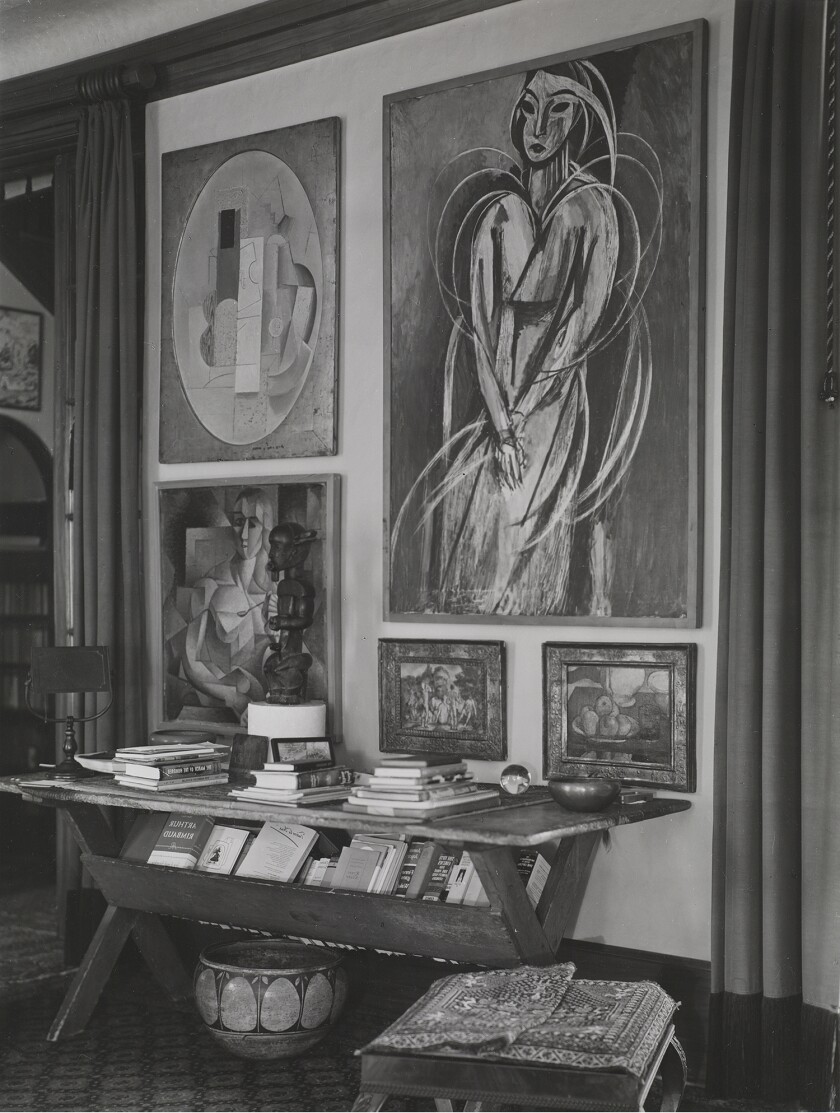 A 1912 Picasso Cubist still life hangs next to a 1913-14 Matisse portrait in the Arensbergs’ living room. 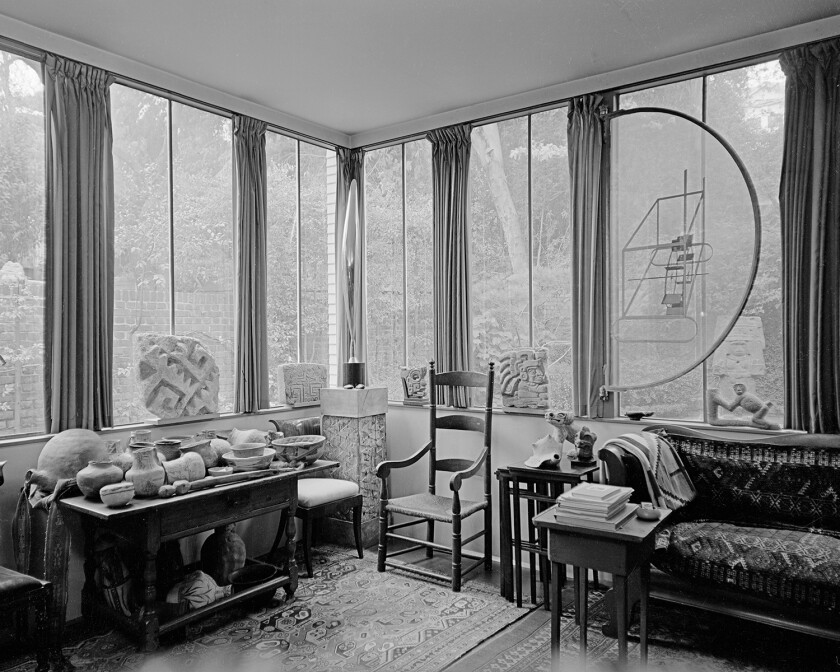 In the Arensbergs’ Neutra-designed sunroom, a Duchamp relief on glass is installed in front of a window, right.

One revelation is that, surely thanks to knowing the Arensbergs, Merrild was captivated by the cryptic power of chance.

At one time or another, the Arensbergs owned the lion’s share of everything Duchamp made. (Multiple versions of his infamous “Nude Descending a Staircase” were in the house.) Engaging the mysterious properties of chance was a driving force in Duchamp’s aesthetic. Merrild’s puzzling, chance-driven work fit right into the collectors’ astounding trove of European avant-garde paintings and sculptures.

A second, equally surprising revelation is the degree to which pre-Hispanic art is central to the story.

In L.A., the Arensbergs went full-throttle into collecting carved stone sculptures and painted ceramics made in ancient Mexico and Central America. Sometimes, they would add a relevant Modern painting, such as Diego Rivera’s “The Flowered Canoe.”

That 1931 canvas, which held a prominent position in the home’s central stairwell, shows more than half a dozen men and women on a Sunday outing in a pleasure boat on one of the famous canals in Mexico City’s Xochimilco neighborhood. Figures fuse Cézanne-style abstraction with forms derived from sturdy Aztec sculpture. 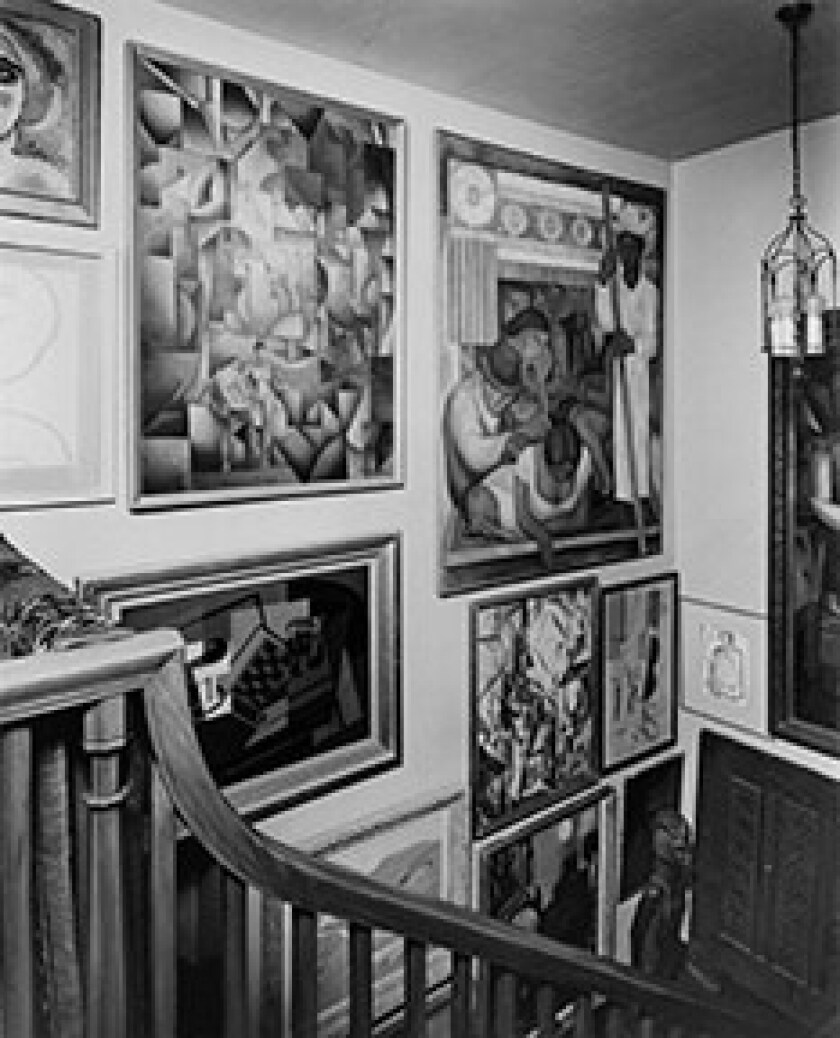 Diego Rivera’s “The Flowered Canoe” (1931) hangs at the top right of the Arensbergs’ staircase. 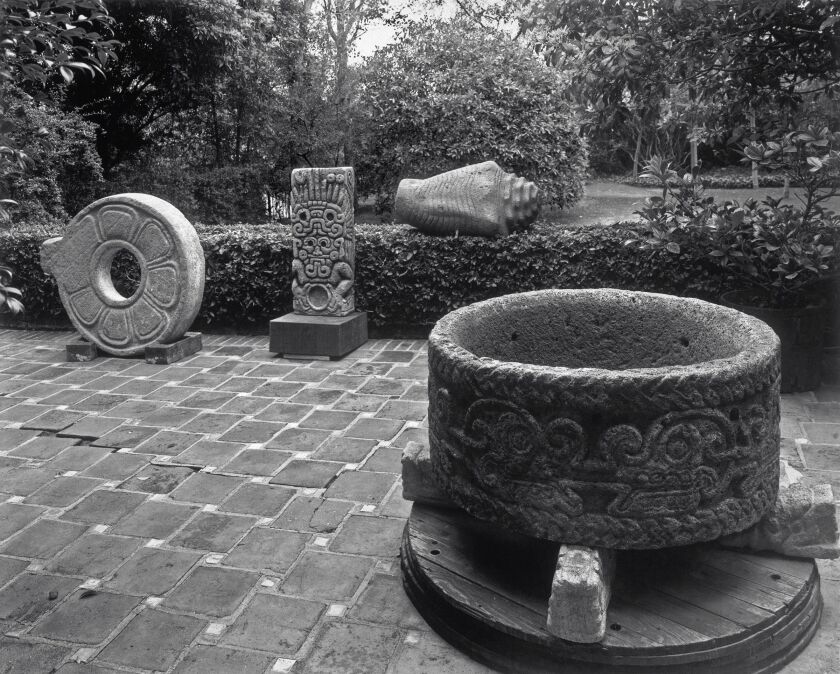 Monumental pre-Hispanic sculpture from Mexico was installed in the Arensbergs’ front patio.

If enigma and mystery were fuel for Dada and Surrealist art, including Merrild’s flux paintings, what could be more enigmatic and mysterious than ancient Aztec, Maya, Toltec and other pre-Hispanic art, which art historians were just beginning to intensely study and interpret? Walter Arensberg was especially drawn to unraveling historic puzzles. His other passion, aside from Modern art, was researching the writings of Francis Bacon, 17th century British “father of empiricism,” including speculation on his authorship of Shakespeare’s plays.

“Hollywood Arensberg: Avant-Garde Collecting in Midcentury L.A.,” set to be released Oct. 22, is 432 pages of fascinating reconstruction of the collectors’ house. Walter was heir to a Pittsburgh company involved with iron smelting, and Louise was a German-born textile heiress whose wealth funded their collecting enterprise. Their 1920 Mediterranean Revival house, with a sunroom added later by Modernist Richard Neutra, was designed by William Lee Woollett, architect of Broadway’s Million Dollar Theater downtown.

A reader travels room by room through the two-story domicile. Side trips explore the gardens. There, monumental pre-Hispanic sculptures held sway.

Los Angeles art lore is filled with Arensberg stories — about their astonishing collection; their close friendship with Duchamp; the life-altering visit to their home by a weird young kid from Eagle Rock named Walter Hopps, who would go on to become an internationally important curator; their futile efforts to find a permanent museum home for their astounding art in Los Angeles and a dozen other cities (the Philadelphia Museum of Art finally agreed); and more. But only a few photographs of the home’s interior have been widely seen.

Those are now amplified immeasurably. Several dozen anchor the book.

Visitors to Philadelphia can happily see much of the collection. But the experience of categorized institutional organization is wholly different from the freewheeling environment on Hillside Avenue. In a new foyer designed by architect Henry Palmer Sabin, for example, an arriving guest is immediately greeted by a smashing — and startling — display. 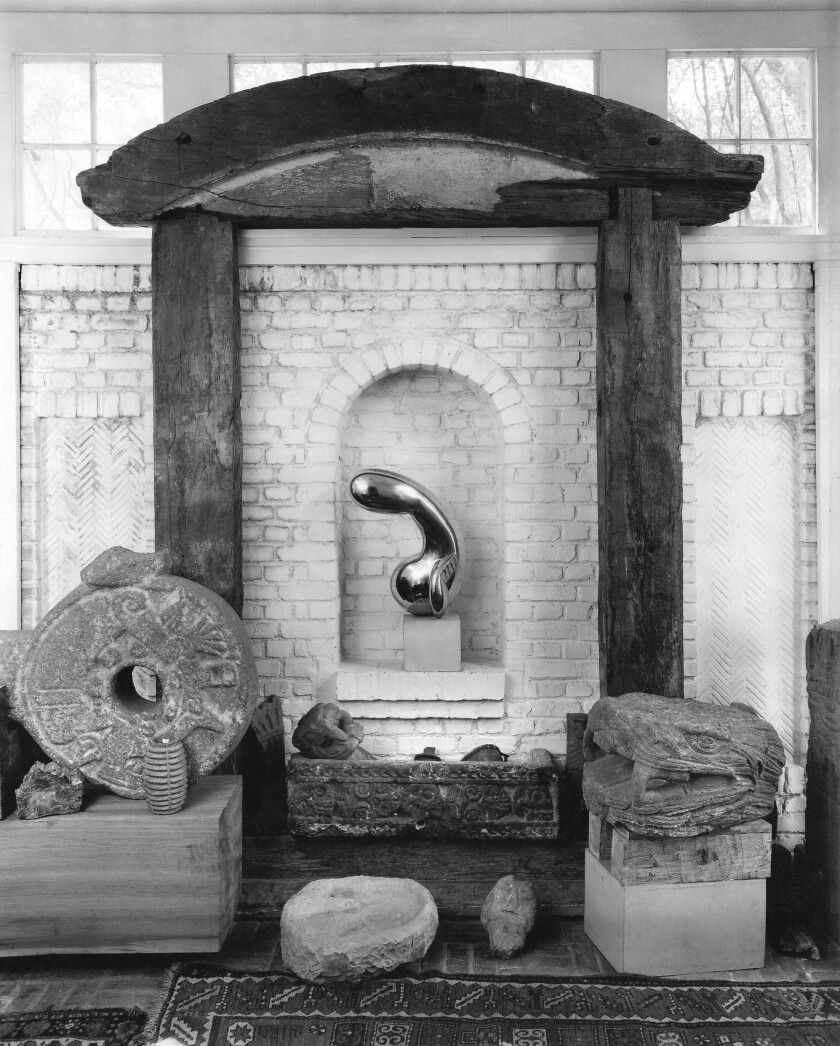 Constantin Brancusi’s sculpture “Princess X” is surrounded by Aztec stone sculptures — and a dinosaur footprint — in the Arensbergs’ foyer.

A Brancusi arch of rough-hewn oak frames a sleekly phallic Brancusi sculpture of a woman’s head, “Princess X,” in polished bronze, semi-erect atop a smooth limestone cube. (The artist once slyly described the controversial work as “Goethe’s ‘Eternal Feminine’ reduced to its essence.”) Numerous pre-Hispanic carved stone sculptures are also displayed, including large heads of a jaguar and a serpent and a big ballcourt ring, all Aztec.

Brancusi is enshrined within a powerful array of non-Classical antiquities, setting aside European sculptural traditions from Greece and Rome. For emphasis, the elemental ensemble features one prehistoric anomaly — a stone slab embedded with a dinosaur footprint.

The footprint fossil turned out to be fake. Still, that’s a house I’d like to see. The book helps a reader do it. 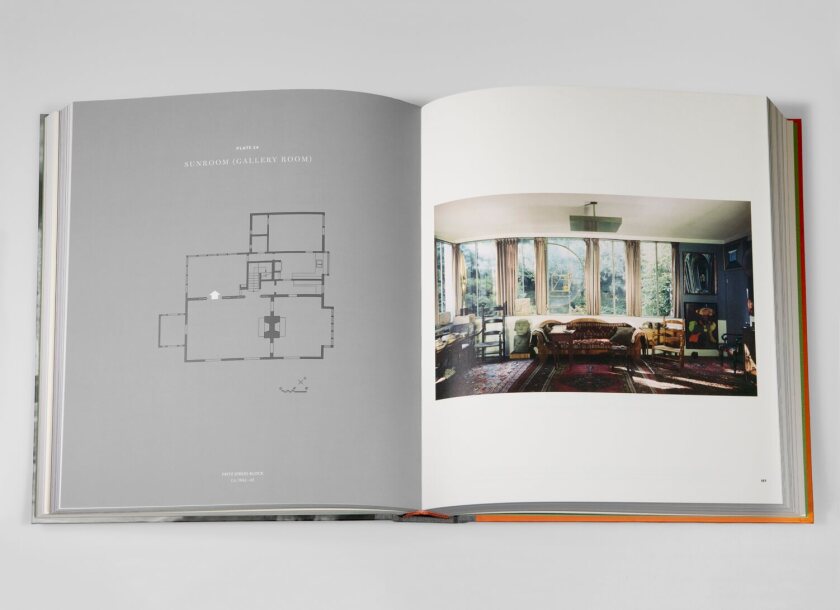 Photographs of the interior are mapped on floorplans of the Arensbergs’ house. 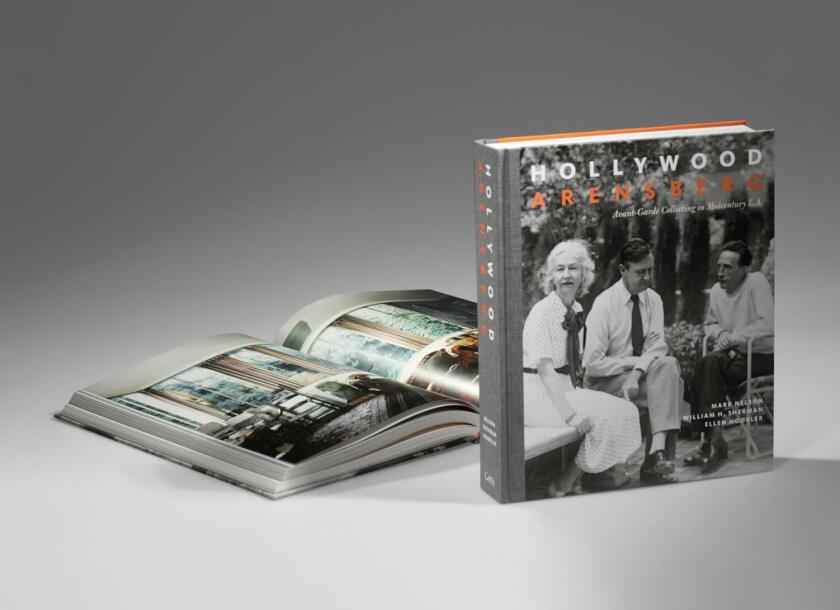 Walter and Louise Arensberg, pictured at left on the book’s cover, were major collectors of Dada artist Marcel Duchamp, right.

The scheme is a sort of scholar’s version of a 3-D home tour on a real estate website.

For each room, as well as the grounds, a documentary photograph on the right faces a floorplan on the left. (Most photographs are black-and-white.) A small arrow on the floorplan indicates the spot from which the picture was taken, and the direction.

Turn the page, and a numbered line drawing on the right picks out every art object in the preceding photograph. A numbered list on the left page identifies the corresponding art in the line drawing opposite.

Some of the photographs zoom in. Others show the same room in different years. New art objects arrive, paintings move around, the installation changes.

People are rarely seen — except for occasional groups of soldiers visiting from a nearby hospital, or perhaps the Arensberg Collection, late in World War II.

The Arensbergs lived in the house for almost 30 years. Art dealer Earl Stendahl, source of some of the Modern work and almost all of the pre-Hispanic art (including knowingly looted items), moved in next door.

Louise Arensberg died in November 1953 at 74. Less than two months later, Walter, 75, followed her. Stendahl bought the property and opened a private gallery. An incomparable chapter in the history of great art collecting closed. Surely, this captivating book will inspire new avenues of exploration.

Alberto Zaccheroni: Ibrahimovic had a greater impact on Italian football than Cristiano Ronaldo
Lucien Favre: Borussia can't rely too much on Holand. He played all the matches for the national team
Simone Inzaghi: Borussia is one of the top eight teams in Europe. Lazio need to play aggressively
Ramos missed Real Madrid's training session and most likely won't play Shakhtar
Cesar Azpilicueta: Sevilla beat Manchester United in the Europa League, but Chelsea at home should be ready for battle
Sergey Rebrov: When we beat Barcelona 4-0, Figo told me that we destroyed them
Julen lopetegui: imposing our style on Chelsea is the idea of Sevilla
Source https://www.latimes.com/entertainment-arts/story/2020-10-01/hollywood-arensberg-book-art-collecting

Man accused of answering pro-Trump neighbors' honk with a gunshot

The Virus in Three Charts

PM Modi to address the nation at 6:00 PM: Here's what it could be about

Fact-check: No, Jama Masjid chief did not issue fatwa against Tanishq

UK to infect healthy volunteers to speed up vaccine efforts

'Baahubali: The Conclusion' to re-release in US theatres on Prabhas's birthday

How Former Rep. Katie Hill Got Past an “Insurmountable” Scandal. Or Did She?

Help! I Just Found Out I Have a 6-Year-Old Daughter.

18 Secrets About Now and Then Revealed

Four Teachers on the Lessons of This Very Strange School Year

Millennial Money: A new set of shopping tips in the pandemic

Dear Care and Feeding: Is It Crazy for Me to Become a Surrogate?

F-22s to intercept a pair of Russian bombers near Alaska

Borat’s Interview With Jimmy Kimmel Quickly Went Off The Rails

All 62 residents at Kansas nursing home have COVID, 10 have died

Tropical Storm Epsilon may become a hurricane near Bermuda

A rainforest campus, stunning theaters and a museum fit for a pharaoh: Africa's most anticipated architecture

DANCE OFF!: Kamala Harris And Trump Bust Out Competing Moves At Dueling Rallies

What to Know About N.Y.’s Plastic Bag Ban

US Presidential Debate Set For Thursday With New Rules

Burgundy and Gold grab bag: So near, and yet so far

Facing a Deluge of Misinformation, Colorado Takes the Offensive Against It

Life (and Death) Without God

After 2 Hurricanes, Lake Charles Fears Its Cries for Help Have Gone Unheard

After botching past elections, Detroit aims to avoid a 'black eye' in November

Trump Is Giving Up

Kamala Harris, Mass Incarceration and Me

First Timers: Out of Prison and Finally Able to Vote

Another rider positive as Giro heads toward uncertain finish

Jeff Bridges Says He Has Lymphoma

I am an American and a Republican — in that order. That's why I'm voting for Biden.

Tab was always a drink in bad taste. Now Coke has finally realized it.

McCarthy locking up support despite fears of GOP losses

This shopping season will be different for this reason

At Least 67,000 Felons Registered To Vote In Florida, Group Says

E-commerce is growing thanks to women: study

2020 Senate elections FAQ: Handful of contests could decide it all