Review: Jim Gaffigan breaks out in 'American Dreamers'; and more

Because stand-up comedians like Jim Gaffigan spend so much time getting laughs from their own flaws, they often have an affinity for tragic roles. Gaffigan brings plenty of gravitas to “American Dreamer,” a low-key neo-noir that starts out as a character sketch about a broken man, and then takes an even darker turn.

Gaffigan plays Cam, a ride-share driver whose explosive temper cost him a high-paying job and his marriage. In desperate need of cash, he kidnaps the young son of a regular client: a dangerous drug lord named Mazz (Robbie Jones). Then Cam finds himself driving Mazz around the city, as the gangster tries to track down the kidnapper instead of paying the ransom.

The first half of “American Dreamer” is overwrought, as writer-director Derrick Forte and co-writer Daniel Forte pile misery on their protagonist. Once the plot kicks in, the movie develops a queasy intensity, with Cam making one head-slapping blunder after another while trying to keep Mazz from learning the truth.

Throughout, Gaffigan is great, eschewing sentimentality as he taps into his frustration and rage — with no jokes in sight.

Richard Kind in the movie "Auggie."

In the lightly fantastical indie drama “Auggie,” Richard Kind plays a newly retired architect who’s having trouble adjusting to his new life, with nothing to do and a wife (played by Susan Blackwell) too busy at her own job to listen to his problems. He spends his days making the most of his retirement gift: a pair of glasses that let him talk with a charming, pretty “augmented reality” companion (played by Christen Harper), conjured from his subconscious.

It’s always a pleasure to watch Kind, a character actor with a knack for playing relatable sad-sacks. While the premise here resembles a cut-rate version of the visionary Spike Jonze film “Her,” the twist of the hero’s obsolescence makes it feel somewhat fresh. Even with the short running time, writer-director Matt Kane and cowriter Marc Underhill exhaust most of their ideas early. But Kind is touching throughout, as a man who just needs to feel wanted.

Director Patrick Brice has helmed some of the more unusual, wickedly funny genre films of the past few years: “The Overnight,” “Creep” and “Creep 2.” But he whiffs with the horror-comedy “Corporate Animals,” penned by Sam Bain. Even with skilled comic actors Jessica Williams, Karan Soni, Nasim Pedrad and Dan Bakkedahl on board, this story of a team-building retreat that devolves into bickering (and eventually cannibalism) relies on obvious jokes about office politics.

Brice and the cast do what they can with a scenario that sticks them in a dark cave for most of the running time. But poor Demi Moore — playing the self-centered CEO of a failing company — comes off as stiff and shrill, setting the tone for a movie that’s stilted from start to finish. 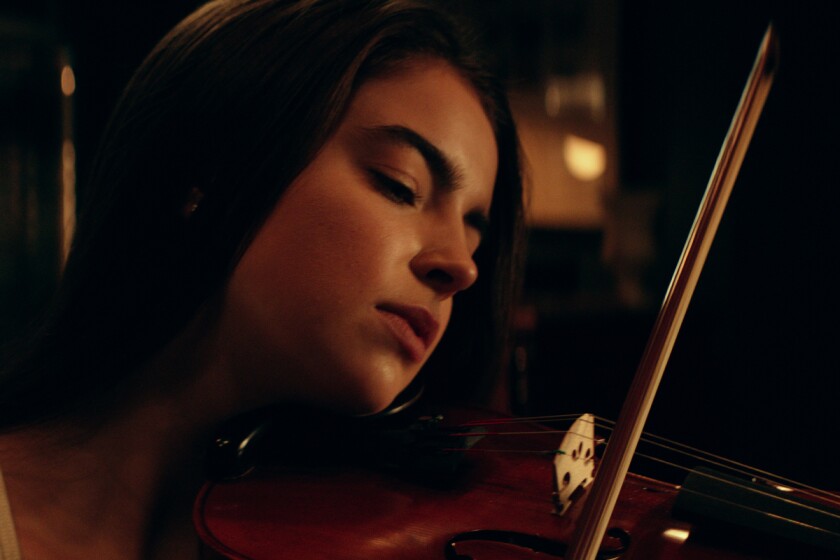 Katherine Hughes in the movie "Ambition."

Veteran Hollywood producer Robert Shaye takes a rare turn in the director’s chair for “Ambition,” a psychological thriller that’s hard to pigeonhole. John Rocco and Jenna Wright’s script recalls ’80s and ’90s nail-biters like “Fatal Attraction” and “Sleeping With the Enemy,” but with elements of gothic romance and Hitchcockian mystery that ultimately prove over-ambitious.

Katherine Hughes plays Jude, a music student who’s feeling anxious about an upcoming concert, just as her personal life begins to unravel. Her boyfriend cheats on her, her best friends seem unsympathetic, and the one person who cares about what she’s going through — a handsome British neighbor, played by Giles Matthey — may be a deranged stalker.

Or at least that’s how Jude perceives what’s happening. The best thing about “Ambition” is how it engages the audience in the heroine’s paranoia, right up to the moment when she’s fighting for her life during a dangerous storm, perhaps risking her life unnecessarily.

But even with an old pro like Shaye behind the camera, “Ambition” is too slight. It’s well-made, but between the limited locations — which are mostly just two low-rent, college kid-appropriate houses — and the young cast, the movie lacks the grandeur to suit its story of a woman who makes every bit of personal drama bigger in her mind.

‘Running With the Devil’ 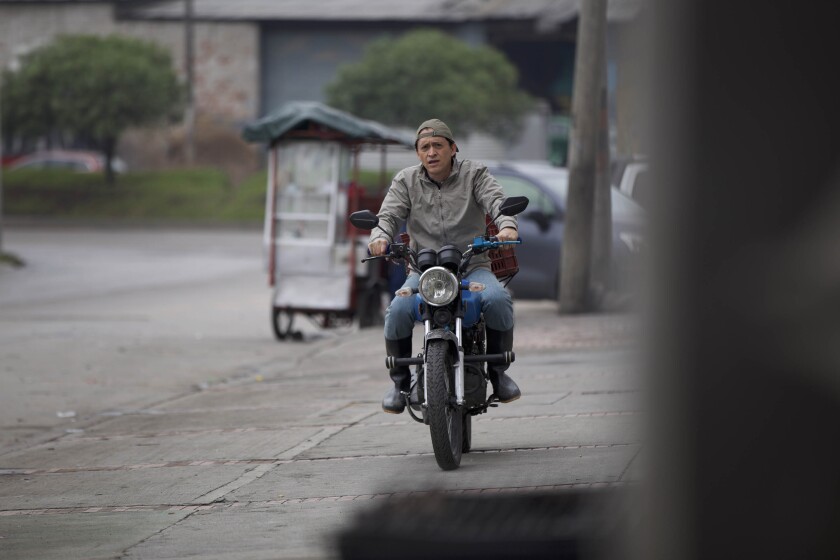 Clifton Collins Jr. in the movie "Running With the Devil."

The globe-hopping thriller “Running With the Devil” plays like a “greatest hits” of drug-war movies, mashing up bits of “Rush,” “Traffic” and “American Made.” Writer-director Jason Cabell keeps the plot and dialogue to a minimum, jumping quickly from scene to scene of hard-working Mexican manufacturers, sleazy U.S. dealers and obsessive narcotics agents willing to bend the law to stop a tainted batch of cocaine from killing addicts.

Cabell seems more interested in the procedural side of the drug trade than in developing his characters, who look and act like they stepped out of a comic book. But with an all-star cast that includes Nicolas Cage, Laurence Fishburne, Adam Goldberg and Clifton Collins Jr. — many of whom ham it up in kooky ways — this movie is enjoyably energetic. It almost doesn’t matter that it doesn’t make a lick of sense.

'Running With the Devil' Seann William Scott gives a haunting performance in “Bloodline,” an offbeat serial-killer thriller that would be more effective if it didn’t have so much in common with the TV series “Dexter.” As a stressed-out high school guidance counselor who helps his students by murdering their abusive relatives, Scott walks a fine line between sympathetic and sinister, in a film that never really finds its purpose.

First-time feature filmmaker Henry Jacobson manages the movie’s varied shocker elements well, lavishing as much attention on a graphic birthing scene and a montage of sleep-deprived parents as he does on a shower stabbing. “Bloodline” is meant to work on viewers’ nerves. For the most part, it does.

But with a cast that includes the estimable Dale Dickey as the hero’s doting mother and Kevin Carroll as a savvy detective, “Bloodline” feels like it should have more of a point. The approach and the perspective are only a little bit different from the typical slasher film.

Witzel on Sancho: He is one of the best players of his generation
Favre about Mike Sancho: I didn't see Anything – I can't judge. I don't know why he did it
The championship will resume on June 20
PSV does not plan to buy out Rodriguez. The defender will return to Milan
Bergomi on Icardi's transfer to PSG: Parisians don't have the prestige of Inter
Alan Shearer: I Want Mbappe to play in the Premier League. I see only one club for him – Newcastle
Sancho on a t shirt that says justice for George: We should not be afraid to speak out for what is right
Source https://www.latimes.com/entertainment-arts/movies/story/2019-09-19/ambition-american-dreamer-auggie-bloodline-corporate-animals-running-with-the-devil-reviews