The fourth season of “Fargo” is upon us, three years after the third, though time in this anthological series is of no particular import as the setting or year changes with each self-contained, if tangentially linked, story. This is the one that stars Chris Rock, and takes place in 1950, in Kansas City, Mo., 602 miles south of the North Dakota city that gives the series its name.

All seasons of “Fargo,” whenever or wherever they take place, share what might be called an aesthetic universe, shaped mainly by the 1996 Coen brothers film that inspired it and the tastes of series creator Noah Hawley (of the multi-plane sci-fi series “Legion”), who has written or cowritten most of the episodes and directed several, including the two that open the new season.

There is also something of Wes Anderson’s case-study sensibility — like the movie, every season erroneously claims to be a “true story” — and maybe a little bit of David Lynch. Additionally this year, there are small and large nods to “The Untouchables,” “The Godfather” and “The Wizard of Oz.” What the series shares with these influences is the quality of belonging to a world much like but not exactly our own, a movie world, heightened, even cartoonish — not necessarily in a bad way, and not entirely devoid of human feeling. There might be the hint of something supernatural as well.

And there is always snow.

I tend to enjoy these series, even as I sometimes think there may be less there than meets the eye. (I feel the same way about many Coen brothers films; their own gangland story, “Miller’s Crossing,” is referenced here too.) But what meets the eye is very appealing. The production values are high, the photography beautiful; the writing is crisp and fuels good performances, so that even characters you don’t care for or even particularly care about tend to be vivid and individual and humanize what is mechanistic in the plotting. It’s a playground for actors. I had no trouble watching nine hours of the new series at a sitting, except for the sitting.

Briefly put, this season involves the faltering balance between two Kansas City mobs, one Black, one Italian, that may be heading toward “war.” (In the meantime, according to some not very practical or plausible or seemingly even beneficial tradition, they trade a young child between families, as a kind of security.) At the head of the first is Loy Cannon, played by Chris Rock. Better and worse bad guys are the rule in “Fargo,” and Loy is, most of the time, the better kind — respected rather than feared, a man with a plan, more thoughtful than not, and history’s underdog: “I’m not just fighting a few Italians, I’m fighting 400 years of history. I’m fighting a mind-set.” 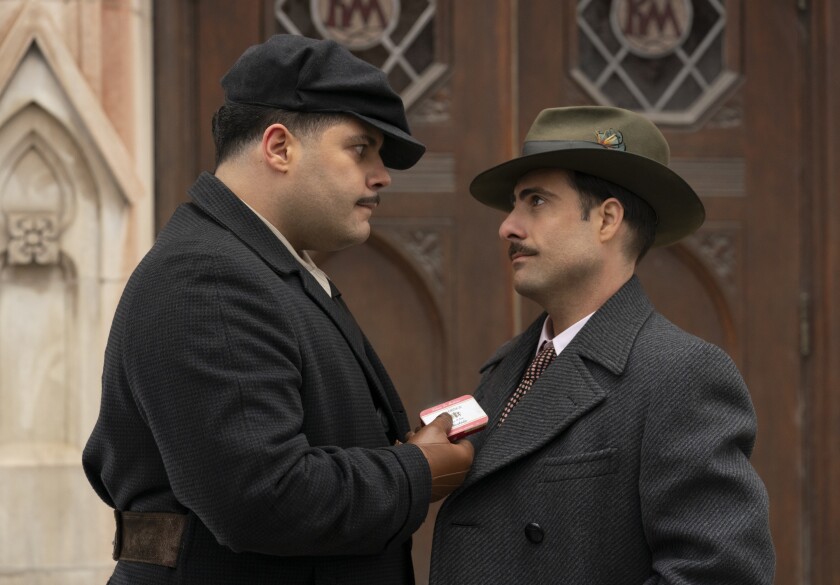 Every season has featured a template inherited from the movie. A weak person is overwhelmed by the multiplying effects of a bad decision; a professional villain, usually from out of town, sows chaos; and a dedicated, dogged officer of the law attempts to keep the peace. There is a quote from philosopher Bertrand Russell attached as an epigram to the ninth episode — “Life is nothing but a competition to be the criminal rather than victim” — but while this seems to describe the world view of certain (well, many) characters, it’s not really true of the series as a whole. Some of them are creating a future beyond those options, which is what has kept “Fargo” a buoyant, rather than a bitter, sort of noir: It makes a place for goodness.

Unfortunately, this year has no analog for the good cops Allison Tolman, Colin Hanks, Patrick Wilson, Ted Danson and Carrie Coon played in earlier series, and Frances McDormand on film before them, though elements of that character are seeded in E’myri Crutchfield’s bright high-school girl with a Nancy Drew streak; Ben Whishaw’s sorrowful Irish member of the Italian gang; and Timothy Olyphant, back in a cowboy hat as a federal marshal. But because criminals dominate the action, the story seems not so much morally complex as unfocused, and because there are so many storylines competing for air, including one involving Jessie Buckley as a nurse with bad habits (and a Minnesota accent to honor the franchise), the show robs some promising characters of screen time. I would watch a whole series of “The Ethelrida Pearl Smutny Mysteries” starring Crutchfield’s curious teen, whose parents (a biracial couple) run a funeral parlor where many of those storylines intersect. She belongs at the center of the action here, but keeps drifting to the edge.

But what most sets this “Fargo” apart is that it means to be about something more than human fecklessness; it has contemporary America on its mind. To start, it brings a substantially Black cast to a series whose stars have been up to now largely white. Race is not all that’s going on here, but it’s always going on, in big and little ways, sometimes subtle, sometimes not very. The period Midwest setting brings “Watchmen” and “Lovecraft Country” quickly to mind; white characters refer to “maintaining the purity of our blood supply” and “miscegenation”; and Olyphant’s marshal, though he is amiable and upright, surely has been made a Mormon because of that church’s historical prejudices against Black people. It’s possibly not incidental that the fugitives he’s trailing are Black and Native American, though the script at least doesn’t belabor that point.

Other points are laid out on velvet for your inspection. It would take a most insensible viewer not to hear the address to 2020 in Italian mob boss Josto Fadda’s (Jason Schwartzman) remarks to Loy: “This country loves a man who takes what he wants, unless that man looks like you. … Society looks at me they see a fella that’s using crime to get ahead. But you, all they see is crime. And that’s why you’re going to lose … ‘cause I can take all the money and [women] I want and still run for president. But you, it’s always going to be the rope.” This is laudable, from a human perspective, if not necessarily from a dramatic one. While the Black mob, notably including Glynn Turman as Loy’s circumspect, adult right-hand man, are treated more or less naturalistically, by “Fargo” standards, with a measure of nobility, the Italians, most of them comical or evil, are caricatures, mired in stereotype. It’s dramatically off-kilter. 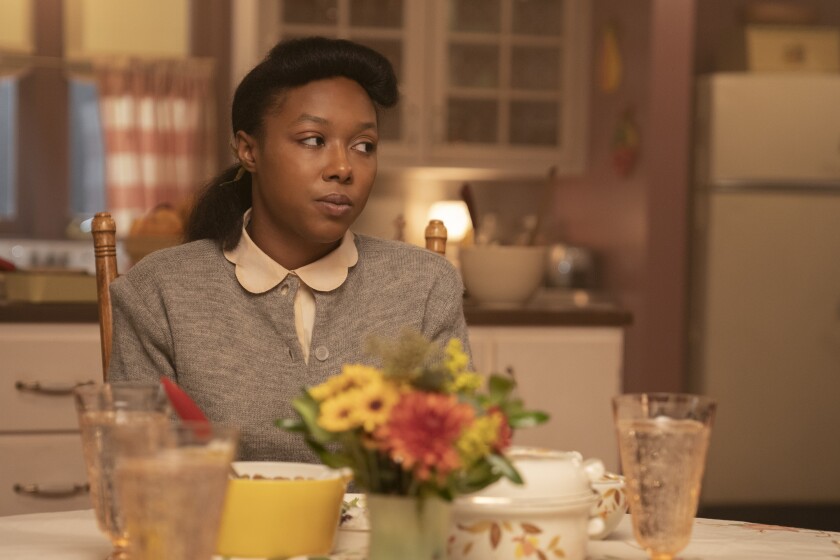 Still, Rock is solid in a role that doesn’t require him to be funny — quite the contrary — though he has lines of dialogue that, with a slight shift in emphasis, could fit into a routine. (“Every country has its own type criminal; in America, we got the confidence man, snake oil salesman, grifter; they don’t rob you so much as trick you into robbing yourself.”) But we are aware, at the same time, that he is Chris Rock, Comedian, and we like Loy before, and even after, we have reason to like him less.

The comedy largely falls to Schwartzman‘s Josto, the season’s designated Person In Over His Head. The chaos sower is his insane brother (Salvatore Esposito), just over from Italy. Esposito plays him like a human pressure cooker; I half expected his eyes to pop right out of his head. (It is a weird, distracting, but I suppose effective performance — I mean, I did hate him.) Schwartzman, an inherently comic presence, stays amusing in a part that requires some nastiness. Similarly, the psychopathic fugitives played by Amber Midthunder and Karen Aldridge — they style themselves outlaws, criminals being too much part of the system — manage to remain oddly charming, despite nearly everything they do being horrible. Is that a good thing?

I’ve seen nine out of the 11 episodes, and though it’s hard to say what larger meaning, if any, might emerge when the smoke clears (I am expecting some smoke, though not necessarily meaning), it is certain that some of these people will be dead — some will be dead before the end, for that matter. Merely in coming to a stop there will be a moment of relief, but as a minor character is made to say of Goldilocks and the Three Bears, “If you think about it, the story’s got no ending.” Will this turn out to be metaphorical foreshadowing? And if so, who in “Fargo’s” fourth season is the Goldilocks, and who the bears?

When:
Rated: TV-MA (may be unsuitable for children under the age of 17)

Lopetegui on the win over Rennes: Sevilla played almost perfectly
Danilo about 0:2 with Barca: Juventus played organized, but not aggressive enough
Tuchel on neymar's adductor muscle injury: I hope it is not serious
Jaydon Sancho: Zenit made us work hard, but Borussia managed to score
Frankie de Jong on the defender's role against Juve: Always ready to play where Barcelona need to play
Rashford with 4 goals led the race of scorers of the season Champions League
Holand scored the most goals (12) in the first 10 matches in the Champions League
Source https://www.latimes.com/entertainment-arts/tv/story/2020-09-25/fargo-fx-season-four-chris-rock-noah-hawley

NFL Week 8 Predictions: Our Picks Against the Spread

How Nas inspired Jalen Rose to embrace his flaws

Ingraham: Biden 'wants America to be permanently defined and changed' -- and will use COVID-19 to do it