FRANKFURT — About eight million people around the world earn their living making cars and trucks. It’s becoming clearer that not all of them will come out of the pandemic with jobs.

The French carmaker Renault announced an emergency cost-cutting plan on Friday that is likely to serve as a grim template for an industry that was in deep trouble even before the coronavirus brought sales nearly to a standstill.

Renault said it would cut nearly 15,000 jobs worldwide, or about 8 percent of its work force, and pull out of China. The company also vowed a drastic reduction in production as it tries to deal with “the major crisis facing the automotive industry.”

Renault has been hit hard by the pandemic. Its sales in the European Union, the company’s most important market, fell almost 80 percent in April, when dealerships were closed and most buyers were not leaving their homes.

“It’s not just Renault,” said Peter Wells, director of the Center for Automotive Industry Research at Cardiff University in Wales. “There are too many factories, too many models, too many dealers. A crisis like this is ruthless in exposing the vulnerabilities of these companies.”

Nissan, Renault’s partner in a global automaking alliance, said Thursday that it would close factories in Indonesia and Spain as it reduces the number of cars it produces by a fifth. The announcement came after Nissan reported a loss for the fiscal year ending in March of 671 billion yen, or $6.3 billion.

Volvo Cars said last month that it would cut 1,300 white-collar jobs in Sweden, its base. Other carmakers, such as Fiat Chrysler and PSA, which makes Peugeot, Citroën and Opel vehicles, will be under pressure to make similar cuts. 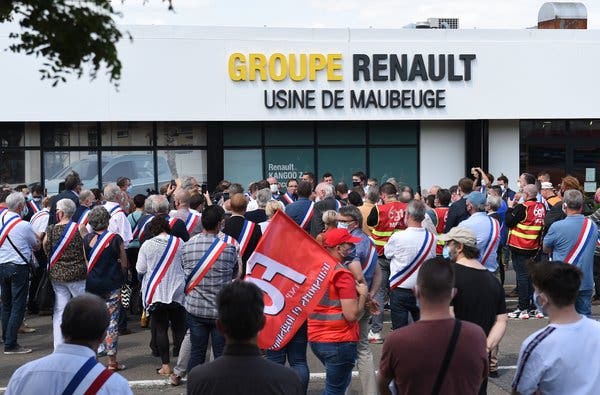 The alleged transfer of vehicle assembly work at a Renault factory in Feignies, France, to another draw a protest this month from local officials.Credit...Thomas Lo Presti/Agence France-Presse — Getty Images

Starting Monday, General Motors plans to have three sport-utility vehicle plants running two shifts per day instead of one, while three truck plants will go from two shifts to three. The increase is a response to reports from dealers that supplies of certain models are running thin.

Toyota, Honda, BMW and other foreign automakers have also restarted plants in the United States. Both G.M. and Fiat Chrysler have begun restarting production in Mexico this week.

While plants are again producing vehicles, automakers have not yet eased back on some of the cost-cutting measures they put in place when the virus began spreading rapidly in March. Those include executive pay cuts and suspension of shareholder dividends.

But with demand unlikely to recover to pre-pandemic levels for years, even the American automakers will not be able to avoid further painful cuts, Mr. Wells said.

The unrest has already begun to manifest itself in Europe.

In Barcelona, some of the 3,000 workers who will lose their jobs at the Nissan facility burned tires outside the factory and marched in protest.

Workers at a Renault plant in Maubeuge, in northern France, walked out immediately after the job cuts were announced on Friday morning. The automaker is considering merging the plant in Maubeuge, where over 2,000 people work, with a nearby plant in Douai to produce electric cars and light commercial vehicles.

Renault said it would also make cuts in marketing and research and development, and halt expansion of factories in Romania and Morocco.

Fabien Gâche, a representative of the hard-line C.G.T. union at Renault, said Friday that the carmaker was cutting jobs but had no “firm, resolute strategy.”

“It is a continuation of what we have seen at Renault for about 15 years, unfortunately,” Mr. Gâche said at a news conference.

Workers at a Nissan factory in Montcada, in the outskirts of Barcelona, Spain, went on strike this month. It was the first of its kind in Spain since the coronavirus outbreak.Credit...Samuel Aranda for The New York Times

Labor strife adds to the upfront costs of corporate austerity and reduces the overall savings. Renault said it would spend 1.2 billion euros, or $1.3 billion, on severance pay and other expenses related to the plan announced Friday.

Automakers are in a delicate situation because they are asking for government aid even as they put thousands of people out of work. Renault’s announcement of job cuts came only three days after the French government pledged €8 billion to encourage sales of electric cars and help carmakers develop new digital technologies.

The French government owns 15 percent of Renault, and it is unlikely that the company formulated the cost-cutting plan without consulting political leaders. French President Emmanuel Macron said nothing about the Renault plan Friday. His office declined to comment.

About a third of the job cuts would be in France, Renault said. The company, with about 180,000 employees worldwide, will reduce the number of cars it produces annually to 3.3 million, from four million, an acknowledgment that the auto industry has too much idle factory space to meet consumer demand for its vehicles.

The economic crisis caused by the pandemic has prompted carmakers to focus on the markets where they are strongest. But they may also be cutting themselves off from growth.

Renault said Friday that it would pull out of China, selling its share in a joint venture with Dongfeng Motor. Nissan said this week that it would pare back its presence in Europe and concentrate on Japan, China and the United States as part of a plan to more clearly delineate the division of labor in the Renault-Nissan-Mitsubishi alliance.

Renault brand cars were never very popular in China. But China is also one of the few places with potential for substantial growth. Rates of car ownership are still low in China compared to the United States and Europe, where sales have been essentially stagnant for years.

Ford, G.M. and Fiat Chrysler have all reported steady recoveries in China, where the virus outbreak originated.

“I think that China market came back relatively quicker than people had expected,” Mike Manley, Fiat Chrysler’s chief executive, said in a conference call this month. But he predicted a more uneven recovery in Europe, especially in hard-hit countries like Italy, the strongest market for Fiat brand cars.

Eric Djemba-Djemba: Pogba and Brunu would have sat in the reserves under Scholes and Keane
Klopp on the championship: I would never compare myself to Dalgliesh and Shankly
Dimitar Berbatov: Earlier it was about the championship of Manchester United, now it is about the top 4
Zidane wants to see Mane at Real Madrid, but the club cannot afford this transfer
Manchester United and Manchester City have made inquiries about Griezmann. Barcelona does not want to let him go
Alaba and Coulibaly, among the purposes of the transfer of Guardiola. He wants to start rebuilding at Manchester City
The new Chelsea uniform is inspired by London tailors. With the logo Three, Lampard's team immediately missed out on three from West ham
Source https://www.nytimes.com/2020/05/29/business/renault-job-cuts.html

Unemployment rate fell to 11% in June, with 4.8M jobs added

US economy adds 4.8 million jobs in June as coronavirus surges

How to Cancel Your Quibi Subscription

Tucker Carlson: What holiday should be canceled next?

Joe Biden must release the results of his cognitive tests. Voters need to know

Dangerous heat to scorch central US on Fourth of July; severe weather in Southeast

TikTok star Sissy Sheridan says her face mask was pierced into her ear: 'It hurts so bad'

Lawmakers to get classified briefing on Russia bounty intel

Wine of the Week: Zinfandels for an All-American Fourth of July

Mother whose son died of a drug overdose during coronavirus lockdown: 'We’re in a crisis right now'

Wide shift in opinion on police, race rare in US polling