Jeffrey Katzenberg just wrapped up the third-priciest home sale in California history, unloading his Beverly Hills compound in an off-market deal for a cool $125 million, sources confirmed to The Times.

It’s a huge return on investment for the DreamWorks Animation co-founder, who recently turned his efforts toward the short-form streaming platform Quibi. Records show the movie magnate paid $30 million for the property in 2009 and erected a 26,000-square-foot mansion three years later.

Details are scarce, but an aerial photo shows the U-shaped home is approached by a tree-lined driveway and expands to a spacious lawn with a swimming pool in back. It spans more than 6 acres on a promontory lot overlooking the historic Greystone Mansion and the Sunset Strip. 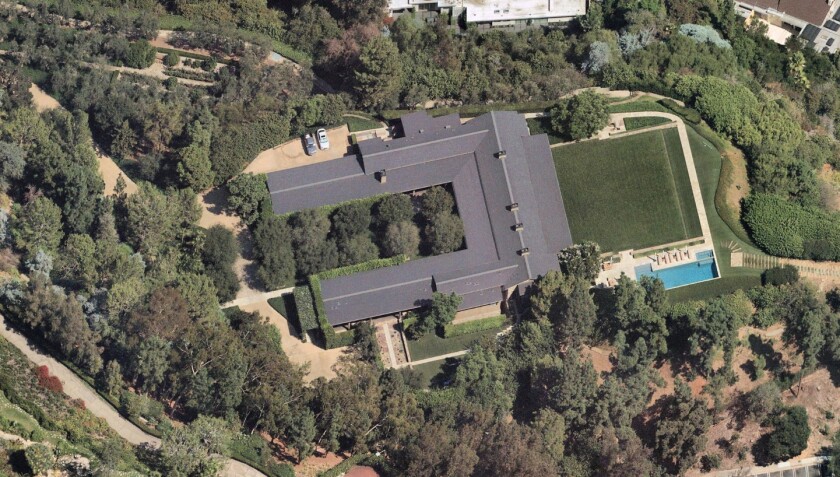 The 26,619-square-foot home sits on a 6-plus-acre promontory lot in Beverly Hills.

The sale, which was first reported by the Wall Street Journal, ranks among the priciest in California history. It’s topped only by Jeff Bezos’ $165-million purchase of the famed Warner estate this year and Lachlan Murdoch’s $150-million purchase of Bel-Air’s “Beverly Hillbillies” mansion last year.

The mammoth sale is the latest splash in Southern California’s red-hot summer real estate market. In June, David Geffen dropped $68 million on the modern Beverly Hills mansion of Los Angeles Olympic Organizing Committee president Casey Wasserman, and this week, it was revealed that Prince Harry and Meghan Markle paid $14.65 million for a 7-acre estate in Montecito.

Katzenberg, 69, spent a decade as chairman of Walt Disney Studios before co-founding DreamWorks Animation with Steven Spielberg and David Geffen. After serving as the studio’s chief executive, he left in 2016 to lead the media and tech investment company WndrCo before founding Quibi in 2018.

Werner scored for Chelsea for the first time
Fernando Santos: Ronaldo can play until the age of 40, but he will leave if he feels that he can no longer be himself
Manchester City want to sign Alaba. To do this, the club needs to sell Zinchenko
The President of Atletico Madrid on Messi at the club: If Leo wants to play with Suarez, anything is possible. We must hope
Saint-Etienne announced fofan's move to Leicester. The 19-year-old defender will be paid 35+5 million euros
Manchester United are only ready to rent Dembele
Drogba to receive UEFA President's award for outstanding achievement
Source https://www.latimes.com/business/real-estate/story/2020-08-12/jeffrey-katzenberg-beverly-hills-mansion

The Trump Administration Was Right to Lobby for in-Person Education

The Masked Singer Shocker: This Unexpected Twist Might "Change the Show Forever"

COVID-19 cases rising among US children as schools reopen

Biden releases tax returns before debate, amid furor over Trump's

Be Honest: You Miss Your Co-Workers

Mystery of Zimbabwe elephant deaths may be solved, as experts eye bacterial disease

‘I Even Missed the Smell’: What It’s Like to Be Back at the Theater

US travelers can currently visit Mexico for $144 roundtrip

Salty Lake, Ponds May Be Gurgling Beneath Mars' South Pole

What is "election stress disorder," and do I have it?

Brett Rypien will start for Broncos against Jets