Protests in DC continue for 6th day with later curfew 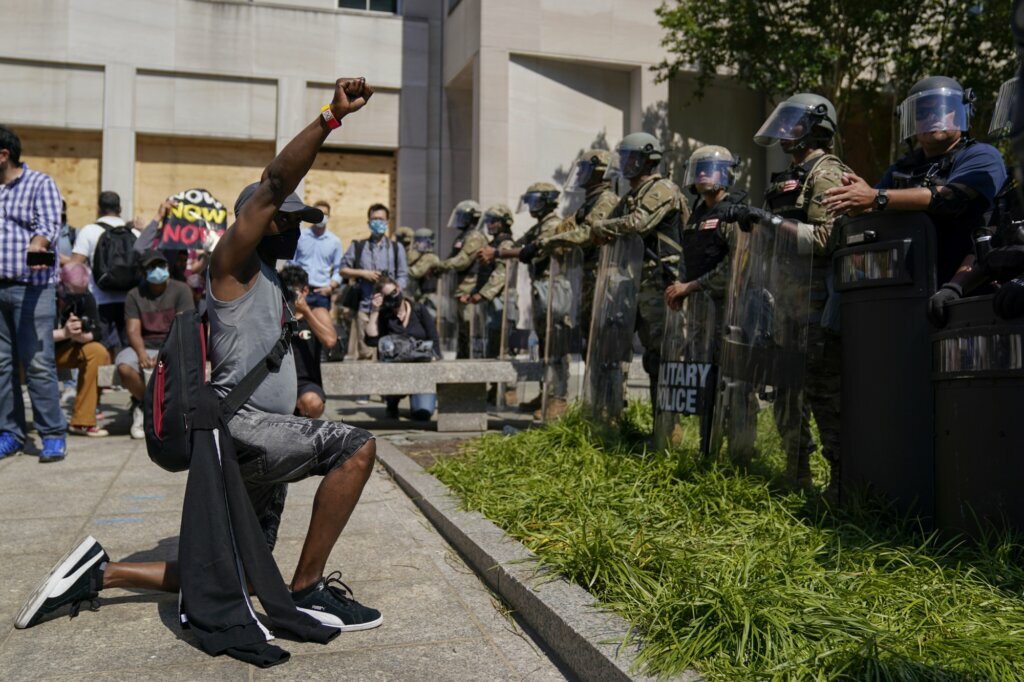 Demonstrators gather to protest the death of George Floyd, Wednesday, June 3, 2020, near the White House in Washington. Floyd died after being restrained by Minneapolis police officers. (AP Photo/Evan Vucci)

Protesters hit the streets of D.C. for the sixth day in a row Wednesday as local leaders eased up restrictions on the demonstrations.

Though protesters largely ignored D.C.’s curfew Tuesday night, peace was at the forefront of the gatherings. In response, Mayor Muriel Bowser set a later curfew Wednesday, starting at 11 p.m., instead of Monday and Tuesday’s 7 p.m. curfew start.

Though nationwide gatherings continued, calls to charge the other three former Minneapolis police officers who were at the scene of George Floyd’s death were answered. Prosecutors also elevated charges against Derek Chauvin, the officer accused of kneeling on Floyd’s neck.

Among the local demonstrations planned for Wednesday was a vigil at St. John’s Episcopal Church. The vigil was moved to the intersection of 16th and I streets because the church was blocked off by federal officers.

The Episcopal Diocese of Washington organized the event after President Donald Trump was widely criticized for posing for photos in front of the church after protesters were forcibly cleared from the area.

They keep boosting their numbers. The episcopal diocese of Washington is holding a vigil here at 16th and I with around a hundred people. They’re sure bringing in a lot of extra boots to watch over an event led by clergy. pic.twitter.com/w0sHRmUgmp

“In faithfulness to our savior who lived a life of nonviolence and sacrificial love, we align ourselves with those seeking justice for the death of George Floyd and countless others through the sacred act of peaceful protest,” Washington Bishop Mariann Budde said in a news release announcing the vigil.

Protesters who attended the vigil later marched to Trump International Hotel, where hundreds gathered to protest.

Members of that group later headed to the U.S. Capitol, where protesters gathered throughout the day.

Ahead of Wednesday’s protests, over 1,000 Army troops were flown to the D.C. region. The Pentagon made the announcement less than a day after the president threatened to deploy the U.S. military to American cities if local governments didn’t crack down on violent demonstrations.

Defense Secretary Mark Esper announced Wednesday afternoon the troops were unnecessary and would begin to leave, but went back on that announcement later in the day after a visit to the White House.

The decision to keep the troops in the area came after Bowser said in a briefing Wednesday that she’s looking into the legality of measures taken by the federal government during the protests.

Bowser said the use of a low-flying helicopter to scatter protesters and federal officers blocking city streets are points of contention.

Legia won the Polish championship for the 4th time in five years. It repeated the League record for titles (14)
Lazio has lost 3 matches in a row and can concede 2nd place in Serie A if Atalanta wins against Juve
A Parma employee has a coronavirus. The team is isolated on the base, but will continue to play in the championship
Kalidou Coulibaly: Napoli is not going to Barcelona as tourists. We are able to give battle
PSG have extended their contract with Kimpembe until 2024
Suarez is not in the start for the match with Valladolid. He has scored 4 goals in the last 4 games for Barca
Dyche Pro 1:1 with Liverpool: top team Scored. Talking about three points is too much
Source https://wtop.com/dc/2020/06/dc-george-floyd-protests-day-6/