Protesters blocked an access road to Mount Rushmore Friday, hours before President Trump was set to give a speech to kick off Independence Day weekend.

According to the Associated Press, the protest group was mostly Native Americans protesting that South Dakota’s Black Hills were taken from the Lakota people against treaty agreements. 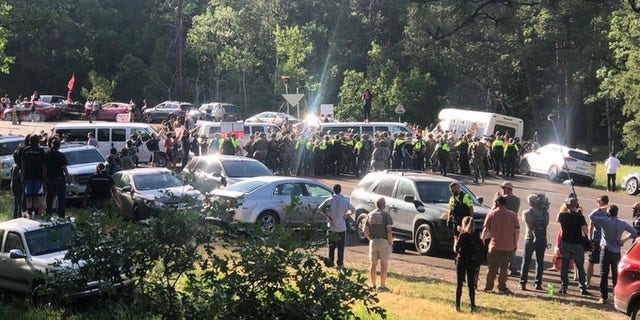 One group parked three vans across the road and took the tires from two of them to make it more difficult to remove them. Several demonstrators climbed on top of the vans chanting “Land back!” Police warned the protesters to disperse but didn’t take any immediate action against them.

The sheriff’s office said attendees had been told to arrive early so should have been past the roadblock. However, the Rapid City Journal reported that some motorists who had tickets for Friday evening's fireworks show were unable to get through the protests and were standing by their cars watching the standoff.

The Journal also reported that law enforcement in riot gear as well as members of the National Guard had arrived on the scene and declared an unlawful assembly.

The news outlet reported that the lower bowl of the amptheater where Trump was scheduled to speak at approximately 8:50 p.m. local time was full, but there were many empty seats in the upper level.

President Trump has been outspoken against the recent protests happening nationwide, targeting historical monuments and statues demonstrators feel represent a pattern of systematic racism in the U.S.

Sources confirmed for Fox News earlier Friday that President Trump planned on addressing the “totalitarian behavior that is completely alien to American life” and the “cancel culture” he believes is being pushed by the left.

He is also expected to emphasize America’s history as a “great and virtuous country.”

“You can expect the president to express strong support for America’s military, the men and women of our police, and so many of our cherished principles and institutions that are under attack daily from the left," a senior administration official told Fox News in a statement Friday evening.

This is a developing story; check back for more updates.

The Associated Press and Fox News' John Roberts contributed to this report.

Sergi Roberto on the Barcelona-Bayern match: It will be like the final
David Silva has agreed a 3-year contract with Lazio for 9 million euros. He will leave the city for free
Mertens Pro 1:3 with Barca: after Langle's goal, Napoli forgot how to play
Muller before Barca: anything can happen in a match of this level
Mammana about moving to Sochi: I will Try to achieve a lot with this great club
Chakyr should not have counted Langle's goal. Ex-referee Andujar Oliver on the Barcelona-Napoli match
Lampard on Chelsea's challenge for the new season: we Don't want to limit ourselves to fighting for the top 4
Source https://www.foxnews.com/politics/protesters-block-mount-rushmore-road-trump-event?utm_source=feedburner&utm_medium=feed&utm_campaign=Feed%3A+foxnews%2Fmost-popular+%28Internal+-+Most+Popular+Content%29

'We came out swinging': Tigers blast 4 HRs in 5-run first to plaster Pirates 11-5