President Trump will reportedly push toward the creation of a federal holiday for Juneteenth.

Ja'Ron Smith, a top administration adviser, told McClatchy DC on Thursday that the president had reversed his stance after previously declining to endorse a legislative effort earlier this year.

The June 19 holiday commemorates the cessation of slavery.

WHAT IS JUNETEENTH? THE HISTORY BEHIND THE OLDEST COMMEMORATION OF THE ABOLISHMENT OF SLAVERY IN THE US

“The president listened to a lot of different stakeholders who have championed it being very important in the community,“ Smith said.

The president is set to give a speech in Atlanta, Ga., on Friday that Smith said would provide new details on the president's agenda for Black America. 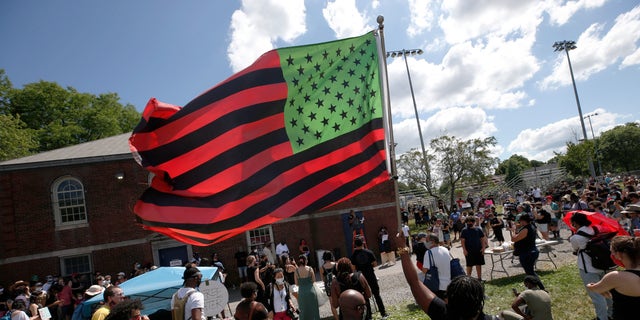 A two-page document the Trump campaign shared with McClatchy DC listed efforts on criminal justice reform and health care, as well as the commitment to make Juneteenth a national holiday.

However, Smith said that while Juneteenth as a holiday is important, the "historic disparities are more important."

"People want success and opportunity more so than a holiday, and so we didn’t want to do that just in a vacuum, because we thought that the disparities that the president is trying to fix are a lot more important than just declaring a holiday," he said.

“So, we wanted to make sure that whatever platform we put out was holistic in nature, and that’s what the president’s going to deliver tomorrow,” Smith added.

Housing and Urban Development Secretary Ben Carson had previously told McClatchy that an annual holiday commemorating the end of slavery was under discussion at the White House.

Congress holds the power to create federal holidays, yet legislation introduced by lawmakers in both major parties has stalled.

Calls for the designation of the holiday increased over the summer amid nationwide protests for social justice and against racial inequality.

The Trump campaign had said the holiday would be part of President Trump's “Platinum Plan."

In his Friday remarks, the president will reportedly pledge to create 3 million new jobs for Black Americans; 500,000 new Black-owned businesses and $500 billion in access to capital in Black communities.

His campaign said he would meet those goals through tax and regulatory reforms and public-private partnerships.

Hans-Dieter flick: I Hope Alaba will sign a contract with Bayern. Our club is one of the best in the world
Diego Maradona: Messi gave Barca everything, brought them to the top. He was not treated the way he deserved
Federico Chiesa: I hope to leave my mark in Juve. We will achieve great results
The Coach Of Benfica: I don't want us to look like the current Barcelona, it has nothing
Guardiola on returning to Barca: I'm happy at Manchester City. I hope to stay here
Fabinho will not play with West ham due to injury
Ronald Koeman: Maradona was the best in his time. Now the best Messi
Source https://www.foxnews.com/politics/trump-juneteenth-national-holiday

The Latest: Australia to spend on vaccines for wider region

US College Campus Gets COVID-19 Warning from Wastewater

Philippines orders evacuation as the strongest typhoon of 2020 approaches

Anne Applebaum’s Dinner Party, and Mine

A US police officer was shot in the face by a pedicab passenger, superintendent says

Body camera video shows Fred Williams jumping a fence, holding a gun when he was shot by deputy

Why does Trump love playing 'Fortunate Son' at rallies? John Fogerty has a pretty good theory

After Trump accuses doctors of profiteering, medical professionals push back.