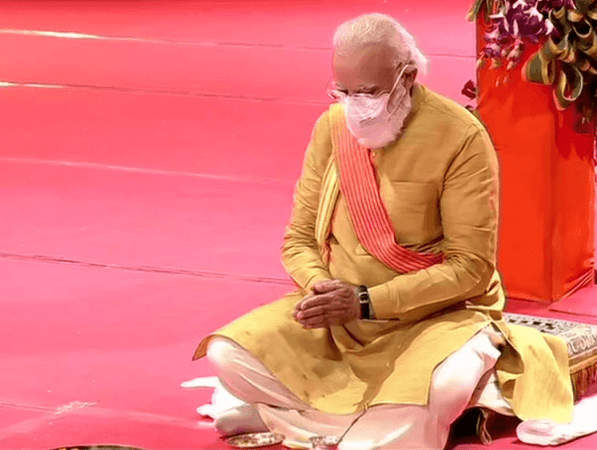 Prime Minister Narendra Modi on Wednesday, August 5, landed in Ayodhya to participate in the bhoomi pujan ceremony of Ram Mandir. PM Modi's chopper has landed at the Saket College helipad from where he headed to the Hanumangarhi temple.

PM Modi has arrived at the Hanumangarhi temple along with CM Adityanath to offer prayers before heading to the bhoomi pujan ceremony site.

PM Modi was seen dressed in traditional attire (dhoti and kurta) as he departed from the national capital in a special aircraft.

After offering prayer at the Hanuman Garhi temple, PM Modi will proceed to the Ram Janmabhoomi complex where he will offer prayers to Ram Lalla Virajman.

The Prime Minister will plant a 'Parijat' sapling at 12.10 pm in the temple complex and then proceed for the Bhoomi Pujan ceremony.

As per an official statement released, the main 'puja' will be held between 12.44 pm and 12.45 pm during the 32-second 'Abhijit Muhurat'. It is the same 'muhurat' or auspicious moment when Lord Ram was believed to have been born.

To symbolise the start of construction of the Ram temple, PM Modi will lay a 40-kg silver brick.

Ram Mandir is at the core of the ruling BJP's ideology and poll promises. A campaign for the temple marked the rise of the party to the national spotlight in the 1990s.

PM Modi is will spend around three hours in Ayodhya. After the ceremony which will end at 12.45 pm, the Prime Minister will address the saints for about an hour after which he will fly back to Lucknow around 2 pm and then return to Delhi.

Chelsea's newcomers came off in the League Cup: Havertz scored a hat-trick (the first of his career), Chilwell an assist, Silva played an hour
Manchester United will lose 139.39 million pounds if the Premier League season is held without spectators - the most in the League
Ruediger - Barcelona's priority transfer target
Arsenal have won 6 matches in a row
Inter midfielder vesino is In talks with Napoli. He was offered to Zenit
UEFA will allow you to make 5 substitutions in European competitions. Of the top 5 leagues, only the Premier League will have 3 substitutions
Havertz scored the first hat-trick of his career
Source https://www.ibtimes.co.in/pm-modi-ayodhya-takes-part-rituals-bhoomi-pujan-ram-janmabhoomi-site-825815