A photo of a Florida sheriff’s deputy and homeless man eating Chick-fil-A for lunch together has gone viral on social media with thousands of shares.

Brownie Lyons and her husband were driving around Lake City on July 2 when they saw Corporal Shane Foote of the Columbia County Sheriff’s Office exit his patrol vehicle and remove a chair, WCJB reported on Wednesday. 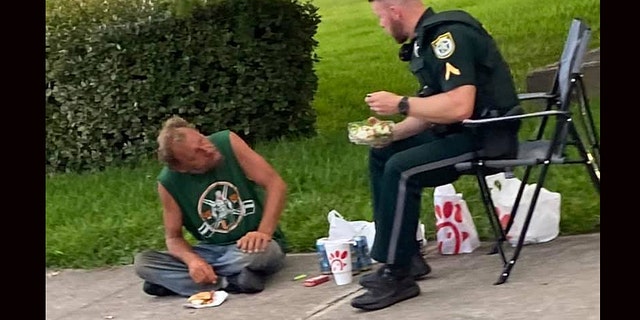 A photo of a Florida sheriff’s deputy and homeless man eating Chick-fil-A for lunch together has gone viral on Facebook. (Brownie Lyons)

“We were wondering if he was going to talk to the guy about being on the street but when we pulled out, he had set up the food and was sitting down with him eating,” Lyons recalled.

Then, the two men enjoyed what appeared to be an impromptu Chick-fil-A picnic on the sidewalk. Lyons snapped a photo of the meal and shared it to Facebook, in a post that has since gone viral with over 4,000 shares.

The photographer explained that she was inspired to share the “feel good moment” because good deeds often go unrecognized.

“I do not know the officer, and personally it doesn’t matter if he’s in law enforcement or not,” Lyons said. “I wanted to show that there are people who do good things and not always for recognition.”

Later on, Lyons’ son realized he had attended school with Foote, and said that the kind deed exemplified “Shane all day everyday!’”

According to Lyons, many Facebook users who personally know the officer have commented on her post to praise what a “great guy” he is.

“I think our community in Lake City has a lot of good officers including Florida Highway Patrol, and I have personally witnessed this but unable to capture it until that day,” she said.

“So many times officers, paramedics, EMTs, and nurses like myself do a lot of good things according to our hearts to serve not for anything else,” Lyons continued. “It takes very little effort to show kindness… A kind word or gesture goes a long way.”

Manchester United are threatening to pull out of negotiations for Sancho if Borussia do not reduce the price from 120 million euros
Cesc about Casillas: You are a mirror to look into
Lone mascots are another symbol of the year
Casemiro: bale is the top 3 in the world at his best level. But we must admit that he is not in the best shape right now
Ferran Torres: Every player wants to be in the attacking team, and city are one of the most attacking teams in the world
Manchester City have announced the transfer of Ferran Torres from Valencia
German Count Zeppelin, heated underpants and Herbert Chapman. The final that started the great Arsenal of the 1930s
Source https://www.foxnews.com/food-drink/photo-florida-sherriffs-deputy-lunch-man-goes-viral

With 2020 on pace to be the worst year in a decade for Black suicides, Cook County officials sound alarm on yet another ‘horrifying’ pandemic

Public housing residents celebrate students heading off to college despite COVID-19: ‘It really means a lot and it motivates me’

Remdesivir made affordable for India; costs ₹4,700 per vial, thanks to Jubilant

These high-waisted Fabletics leggings are a workout must-have

Black SUVs line up for laid-off employees outside NBCUniversal offices

Fulham triumph in world's most lucrative football match, worth a possible $346 million

Detroit City FC closes in on $1.2 million goal for partial sale of team

Why do we still have The Bomb?

Isaias Unleashes Floods and Tornadoes As It Pummels the Atlantic Coast

Rafael Nadal bows out of US Open citing pandemic concerns: 'This is a decision I never wanted to take'

In pictures: Photos show scale of damage after massive blast

Disney to release 'Mulan' on streaming service, for a price

Trump's Covid-19 testing czar says the government is doing all it can on tests. That's not what the experts say.

When Will ‘The Rain’ Season 3 Premiere on Netflix?

Cardinals Yadier Molina one of 13 members to test positive for COVID-19: 'I look forward to rejoining the team soon'

Analysis: In up-and-down season, Nets got a moment to savor

Saros sharp, Predators even series with 4-2 win over Coyotes

In age of COVID-19, change is new thing as Detroit casinos reopen

Gov. Whitmer seeks to up the ante on COVID-19 order enforcement with latest mandate

The 15 Best Friends Episodes to Stream on HBO Max

China vows retaliation if US continues 'hostile actions' against journalists

Opinion: Diversity is critical for NFL in devising COVID-19 strategies

Democrats Might Have a Shot at a Kansas Senate Seat

Juan Soto reinstated from COVID IL, but not in Nats' lineup

The Top Food Franchises of 2020

Trump backtracks on his condemnation of mail-in voting, says Florida is an exception