Philadelphia police: At least 50 ATMs have been blown up in George Floyd riots; man arrested on WMD charge

Looters have used explosives to try and break into dozens of ATMs in Philadelphia since Saturday, the city’s police commissioner said during a press conference Wednesday -- and at least one man has been arrested for allegedly selling homemade dynamite.

“In addition to the looting and vandalism, there has been a marked increase in attempts to forcibly enter ATM machines,” Commissioner Danielle Outlaw said. “These attempts have included the extremely reckless and dangerous use of explosive materials.”

She said police have responded to at least 135 “explosive events” overall in the last few days, including about 50 ATMs that were damaged or opened as the result of blasts.

Pennsylvania Attorney General Josh Shapiro said at least one person had been arrested after allegedly hawking homemade dynamite along with instructions on how to use it specifically to break into ATMs.

"At a time when millions in our country are calling for justice, these violent crimes of distraction are intolerable," Shaprio said. "They are a threat to our safety, but also to our First Amendment right to be heard, to assemble, to protest."

Shapiro said investigators found social media posts from the suspect in which he allegedly advertised the explosives for sale and boasted that dynamite is "better than bullets" for robbing an ATM. He said police set up an undercover buy and caught the suspect with live explosives in his vehicle.

The suspect, identified as Talib Crump, faces a slew of charges, including one count of possession of weapons of mass destruction (WMD). Authorities said it's unclear whether or not he is connected to any of the explosions.

A 24-year-old man died in one ATM explosion Tuesday after he allegedly attempted to break into a machine on a sidewalk outside a sports bar on North Second Street.

“As best we can determine at the moment, the vast majority of these machines were damaged or opened by the use of M250 to M100 illegal explosive devices,” Outlaw said.

She said the city police department was receiving help from the federal Bureau of Alcohol, Tobacco, Firearms and Explosives (ATF). 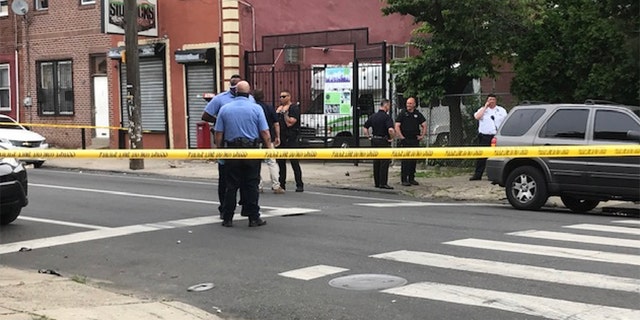 Police tape off the area around where a 24-year-old man died in an ATM explosion Tuesday. (Courtesy Laura Dawn Johnson/Twitter @LaurenDawnFox29)

Most of the damaged ATMs had no money in them, Outlaw said, but she is encouraging business owners in the city who have their own private machines to make sure they’re empty of cash until the situation calms down. 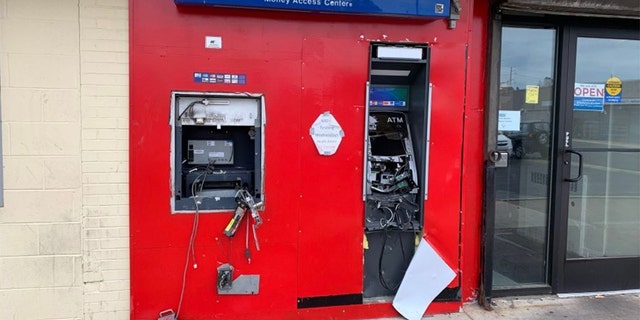 One of the damaged ATMs in Philadelphia. (Courtesy Laura Dawn Johnson/Twitter @LaurenDawnFox29)

The ATM break-ins happened during protests over the death of Minneapolis man George Floyd, who died in police custody on May 25. In some cases, looters and vandals have taken advantage of the demonstrations to break into or deface businesses.

Four police officers were fired from the Minneapolis Police Department last week. Following days of unrest across the country, they have all been criminally charged.

Derek Chauvin, the former officer seen in a video kneeling on Floyd’s neck before his death, initially faced a charge of third-degree murder. Minnesota Attorney General Keith Ellison announced Wednesday that the charges would be upgraded to include second-degree murder, and that the other three officers would be charged for their own roles in Floyd’s death. Those ex-officers are Thomas Lane, J.A. Kueng, and Tou Thao.

In Philadelphia’s protests, Outlaw said more than 700 people had been arrested and almost 500 issued violations.

At least 25 Philadelphia police officers have been injured in connection with the demonstrations, she said, including one officer who remains hospitalized.

But she also said Wednesday that looting and vandalism appeared to be slowing down. The city is now under a 6 p.m. curfew.

Mohamed Salah: I hope to stay in Liverpool for a long time
La Liga President: Many try to justify failures on the field by talking about rest and schedule
Rivaldo on Griezmann: I Don't understand why the world champion and multi-million dollar transfer only comes out at the last minute
The Doctor Sociedad: The Youngster from serious injury. We are not currently considering the option of surgery
Klopp made Liverpool Champions. Now it's your turn: the game Showsport
Daughter of the owner of Valencia: This is our club and we can do whatever we want with it. Don't the fans understand?
Manchester City and Chelsea are Interested in Dean
Source https://www.foxnews.com/us/philadelphia-police-50-atms-blown-up-george-floyd-riots?utm_source=feedburner&utm_medium=feed&utm_campaign=Feed%3A+foxnews%2Fnational+%28Internal+-+US+Latest+-+Text%29

Bracing for a second shutdown

The true cost of a new confrontation with China

How to Win the Fight Over Confederate Statues and Bases

How California went from success story to virus hot spot

Surface Earbuds deliver on comfort and sound, but the price leaves you wanting more

Carville repeats prediction that Trump will drop out of race