KARACHI, Pakistan — The bodies were pulled one by one from the ruins of damaged buildings and the smoldering wreckage of the Pakistan International Airlines plane that had crashed a day earlier into a crowded neighborhood of Karachi: 97 of them by Saturday.

Many were charred beyond recognition, leaving families — some clutching pictures of their loved ones — to depend on DNA reports from a laboratory to identify those they had lost. Most of the relatives had spent the night before at the Jinnah Postgraduate Medical Center, the city’s largest government hospital, and on Saturday in hot weather at the crash site in the Model Colony neighborhood, waiting for the grim word.

To help with the identifications, DNA samples from relatives of 40 victims had been submitted at the forensic lab at the University of Karachi, officials said. Nineteen bodies were identified and handed over to the relatives after DNA extraction and identification, according to health officials, and post-mortems were being carried out on the rest of the passengers of the plane, an Airbus A320 belonging to the national airline. 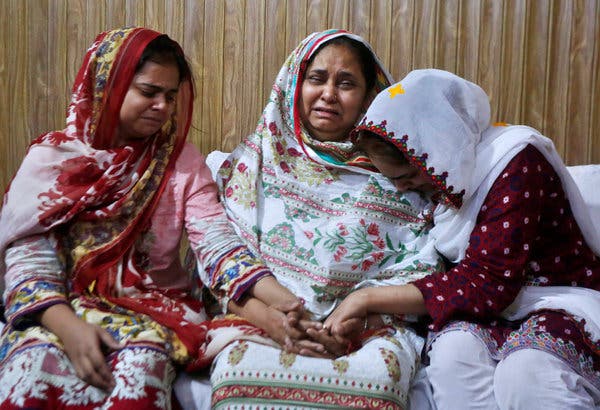 Relatives of a flight attendant killed in Friday's crash mourned at their home in Lahore on Saturday.Credit...K.M. Chaudary/Associated Press

Imran Ali’s 32-year old nephew, Armaghan Ali, was one of the people onboard the ill-fated plane. He said in an interview on Saturday, “Several family members tried their best to recognize his body among several corpses, but bodies are burned and massively disfigured.” So Mr. Ali provided a blood sample from his sister to help identify his nephew, and he was still waiting for the results.

“He was working with the country’s mega housing firm in Lahore and was coming to celebrate Eid with the family,” Mr. Ali said. 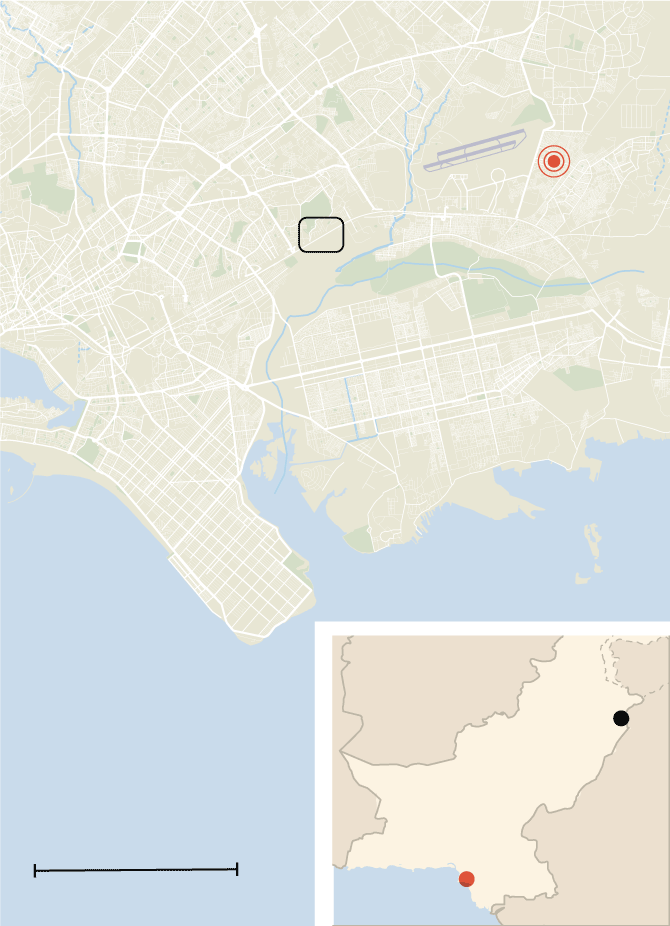 The crash has cast a pall on the nation a day before Eid al-Fitr, the Muslim holiday marking the end of Ramadan, the holy month of fasting. The nation’s aviation industry has long had a troubled history of crashes. Most of the passengers, including top banking executives, a senior civil servant and military officials, had been returning to Karachi for Eid.

Pakistan Civil Aviation officials said 91 passengers and eight crew members had been on board Flight 8303 when it crashed Friday afternoon after departing from the eastern city of Lahore en route to the southern port city of Karachi. Two reportedly survived. The plane went down at 2:37 p.m. a few miles from the airport.

The pilot reported having lost engines as he tried to land, declaring, “Mayday, mayday!” Prime Minister Imran Khan has ordered an inquiry, and the country’s Safety Investigation Board, comprising senior air force and aviation officials, is leading the investigation.

Officials said on Saturday that miraculously, there were no fatalities on the ground though the plane damaged 19 houses, setting two ablaze and burning them to the ground, in Model Colony, 3.2 kilometers from the Karachi airport.

Muhammad Naeem, a university student, pointed on Saturday to what was left of a destroyed house on Saturday afternoon. He said the family that live there had been busy preparing for the wedding of their daughter. It had been scheduled after Eid.

“They have stocked furniture, clothes and other expensive items for the wedding for their daughter,” Mr. Naeem said. “But the plane crash destroyed everything.”

He said two women in the house had been injured but were in stable condition.

Waqar Ahmed, another resident, demanded that the government move the airport away from the residential area of the city — a demand unlikely to be met. “Because of close proximity, children often panic when planes land,” he said. “Friday’s plane crash now showed how dangerous it is to live very near to the airport.”

The funeral of a victim on Saturday.Credit...Shahzaib Akber/EPA, via Shutterstock

A video of one of the survivors pulled from the wreckage emerged and was shared widely on social media.

“Help him! Save the one who is alive!” one man could be heard shouting in the footage as several people, including a paramilitary official, picked up a victim dressed in a white T-shirt and blue denim, his eyes closed and seemingly unconscious, and moving him away from smoky wreckage of the plane.

Another man asks if there are any more survivors, but he is quickly warned by a voice in the background that it is dangerous to move closer to the wreckage because the flames from the plane crash could quickly overtake the remaining houses.

The survivor pulled from rubble was later identified as Zafar Masud, the president and chief executive of Bank of Punjab, one of Pakistan’s largest lenders. Mr. Masud moved to Lahore in March after he landed the job and was visiting family in Karachi for Eid al-Fitr.

Debris from the crash on the roof of a house.Credit...Akhtar Soomro/Reuters

“He is shaken but in good spirits, all other things considered,” Zainab Imam, Mr. Masud’s younger sister, said in an interview on Saturday.

“He told us how he was rescued by some very kind people who carefully pulled him out of the debris and into the ambulance,” Ms. Imam said. That’s when he realized he’s broken his arm and injured his leg.”

Mr. Masud was taken to the Combined Military Hospital in the Malir neighborhood of Karachi.

“He borrowed a hospital staffer’s phone to call my parents as soon as he could,” Ms. Imam said, adding: “He is a brave man, with great presence of mind.”

Ms. Imam said the family was grateful to those who had stepped in to rescue her brother: “We are indebted to them as a family. They are heroes.”

Atalanta extended the winning streak to 11 matches, beating Sampdoria-2:0
Milner played his 536th game in the Premier League and was ranked in the top 5 of the League in games played
Barca midfielder Fati is removed in the Derby with Espanyol. He spent 5 minutes on the field
Suarez scored 195 goals for Barcelona and finished third in the club's top scorer list
Daniele de Rossi: People call Messi cowardly, but they are afraid to ask their wives for a remote control from the TV
Daniele de Rossi: Ronaldo is comparable to Messi in goals and trophies, but Leo's game is more fun
Pep about 5:0 with Newcastle: Manchester City tries to score more goals out of respect for the tournament and the opponent
Source https://www.nytimes.com/2020/05/23/world/asia/pakistan-plane-crash.html