Overlooked is a series of obituaries about remarkable people whose deaths, beginning in 1851, went unreported in The Times.

When Brad Lomax joined the Black Panther Party in the late 1960s, he hoped to be part of a revolution that would provide a better life for Black Americans, free of inequality, poverty and police brutality. And to a large extent he succeeded, making important contributions to the Panthers on both coasts. But it was in an entirely different civil rights movement — one for people with disabilities — that he would make his most indelible mark.

Lomax had already learned that he had multiple sclerosis when he helped found the Black Panther Party’s Washington chapter in 1969. He went on to help organize, in 1972, the first African Liberation Day demonstration, which drew tens of thousands of marchers to the National Mall to proclaim solidarity with African nations in their efforts to win independence.

He moved to Oakland, Calif., the next year — a time when the Bay Area was a whirl of social action. The disabilities rights movement had gained a foothold there, as had the gay rights and Native American rights movements.

In Oakland, Lomax struggled to navigate its transit system. To board a bus, his brother, Glenn, would have to lift him out of his wheelchair, carry him up the steps and place him in a seat, then go back to retrieve the wheelchair.

Such indignities galvanized Lomax to consider the plight of people with disabilities in a world that didn’t make it easy for them. “He could see all the obstacles they had to face,” Glenn Lomax said in a phone interview. 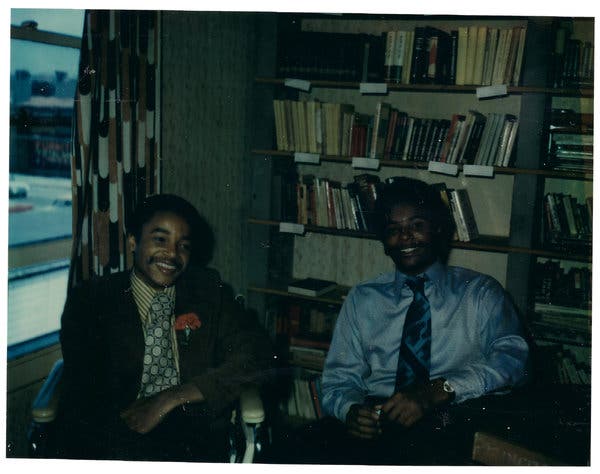 Lomax, left, with his brother, Glenn, in 1974 in the library of the Black Panther Party’s offices in Oakland, Calif.

Lomax became a key figure in the disability rights movement when he joined more than 100 people in 1977 in occupying the fourth-floor offices of the Department of Health, Education and Welfare in the San Francisco Federal Building. Their goal was to persuade the government to enforce a long-ignored section of the Rehabilitation Act of 1973.

Tucked in the act was Section 504, which, modeled on the Civil Rights Act of 1964, had the potential to change the lives of people living with disabilities by prohibiting recipients of federal aid from discriminating against any “otherwise qualified individuals with a disability.”

The demonstration, known as the 504 Sit-in, would last for 24 days, making it the longest peaceful occupation of a federal building in the nation’s history. Lomax, accompanied by an attendant, Chuck Jackson, not only helped lead the protest; he also gained the support of their fellow Black Panthers, a group that had advocated armed self-defense while also providing social services to the Black community; the Panthers agreed to bring hot meals and other provisions to the building daily.

“Without the presence of Brad Lomax and Chuck Jackson, the Black Panthers would not have fed the 504 participants occupying the H.E.W. building,” Corbett O’Toole, who took part in the demonstration, wrote in an unpublished memoir. “Without that food, the sit-in would have collapsed.”

Bradford Clyde Lomax, the eldest of three siblings, was born on Sept. 13, 1950, in Philadelphia to Katie Lee (Bell) Lomax and Joseph Randolph Lomax, a World War II veteran and electrician.

Lomax celebrating his birthday with friends and family members at his mother’s house in San Francisco in 1981.Credit...Glenn Lomax

Lomax’s childhood was filled with football, drama clubs and Boy Scouts, all set against the charged backdrop of the civil rights movement. A trip to visit his mother’s family in Alabama when he was 13 formed an indelible impression, his brother recalled.

Alabama in 1963 was an epicenter of the civil rights movement, with lunch counter sit-ins, protest marches and other actions aimed at dismantling state-sponsored segregation. There, for the first time, Brad encountered signs designating some public spaces for white people and some for Black people.

After graduating from Benjamin Franklin High School in Philadelphia in 1968, Lomax considered joining the military, but as the war in Vietnam raged, with Black soldiers bearing a disproportionate share of the burden, he decided instead to attend Howard University in Washington.

That year — inexplicably, it seemed — Lomax began falling as he walked. Then he learned that he had multiple sclerosis. As the disease progressed, he began using a wheelchair — and it opened his eyes to another form of discrimination. Wheelchairs that were supposed to provide independence, he found, were of little use in gaining entrance to public buildings without ramps. He saw that people with disabilities were regularly denied an education, and that there were few services to help them find housing or jobs, especially if they were Black.

After moving to Oakland, he learned about the Center for Independent Living, an organization started by people with disabilities that was instrumental in getting curb cuts for wheelchairs at street corners in San Francisco and nearby Berkeley. In 1975, he approached the director, Ed Roberts, and proposed that the center combine efforts with the Black Panthers to offer assistance to disabled people in East Oakland’s mostly Black community.

The relationships he built across the two communities would prove vital during the 504 Sit-in two years later.

The Department of Health, Education and Welfare had been charged with writing the regulations for implementing Section 504, which was to be a model for other federal agencies. But the regulations were never enacted under President Gerald R. Ford because of resistance from business and government interests, which were wary of the costs of providing accessibility to education, employment, health care and public buildings.

In his campaign for president in 1976, Jimmy Carter promised to move the regulations forward, but after he took office, his new H.E.W. secretary, Joseph A. Califano Jr., said the rules would have to be overhauled before he would sign them.

To the activists, it seemed as if Califano was stalling in an attempt to water down the regulations.

After years of calling for Section 504 to be enacted, disabilities rights activists set April 5, 1977, as a deadline for action.

The demonstration in San Francisco that day began outside of H.E.W.’s offices, at 50 United Nations Plaza, with speeches and chants. A group of protesters then went inside demanding to know when Califano would sign the regulations.

One of the demonstrators, Dennis Billups, said in a phone interview that many of the protesters had no idea that sit-ins were happening simultaneously at H.E.W. offices in Washington, Denver, Los Angeles and elsewhere around the country, or that the sit-in would last so long. Most had no toothbrushes, no change of clothing and no food. But even as the sit-ins in the other cities fizzled, and even as the government switched off the water supply, cut off telephone lines and restricted movement in and out of the federal building, the San Francisco contingent held strong.

Lomax with other demonstrators inside the San Francisco Federal Building in April 1977.Credit...Glenn Lomax

After Lomax sent word to the Black Panthers that the protesters intended to stay put, the group mobilized, delivering ribs, fried chicken and a message of solidarity.

“Brad was able to get the Black Panther Party to see that this was critical to the work that they were doing,” said Judy Heumann, a demonstration leader. “He was the linchpin for that.”

Though the sit-in received only sporadic coverage by the mainstream news media, the Black Panther’s newspaper followed it closely, with Lomax acting as a go-between for reporters.

“Even though disability rights was not high on the agenda of the Black Panther Party per se, this was,” Michael Fultz, who was editor of the paper, said in an interview.

After three weeks, Lomax and Jackson were among 25 demonstrators chosen to travel to Washington to pressure Califano to sign the regulations. The Black Panthers paid their way. The trip was successful: Califano signed the regulations on April 28, 1977, and the contingent returned to San Francisco to lead the demonstrators out of the federal building singing, “We Have Overcome.”

Lomax continued to work with the Panthers for a few more years. He died of complications of multiple sclerosis in Sacramento on Aug. 28, 1984. He was 33.

“I don’t think that all of his aspirations were fulfilled, even after the demonstration,” Billups said. “He really wanted more.”

While the 504 regulations pushed the government toward accessibility, they applied only to federally funded programs. But their enactment laid the groundwork for the Americans With Disabilities Act, which was passed in 1990.

Sergi Roberto on the Barcelona-Bayern match: It will be like the final
David Silva has agreed a 3-year contract with Lazio for 9 million euros. He will leave the city for free
Mertens Pro 1:3 with Barca: after Langle's goal, Napoli forgot how to play
Muller before Barca: anything can happen in a match of this level
Mammana about moving to Sochi: I will Try to achieve a lot with this great club
Chakyr should not have counted Langle's goal. Ex-referee Andujar Oliver on the Barcelona-Napoli match
Lampard on Chelsea's challenge for the new season: we Don't want to limit ourselves to fighting for the top 4
Source https://www.nytimes.com/2020/07/08/obituaries/brad-lomax-overlooked.html

'We came out swinging': Tigers blast 4 HRs in 5-run first to plaster Pirates 11-5