Protesters in Philly flee teargass as they clash with police on June 1 on I-676. (Photo:Photo by Mark Makela/Getty Images)

After the death of George Floyd in Minneapolis on May 25, protesters demonstrated in every state in the nation, mostly peacefully. In Philadelphia, protests were in earnest in June. While some protesters were involved in violent clashes with police and others looted stores downtown, most of the protests in and around the city’s most recognizable landmarks were peaceful.

Such was the case when protesters gathered on the I-676 Schuylkill Expressway, the highway that connects the city to the suburbs. Several hundred protesters gathered there on June 1 to proclaim Black Lives Matter and to draw attention to the deaths of Floyd, Breonna Taylor and Ahmaud Arbery.

As would be detailed in a Philadelphia Inquirer account, the non-violent protesters were met with a police force that ended up teargassing and pepper-spraying them, pelting them with rubber bullets and sending most scrambling up an embankment where they were trapped by a fence. 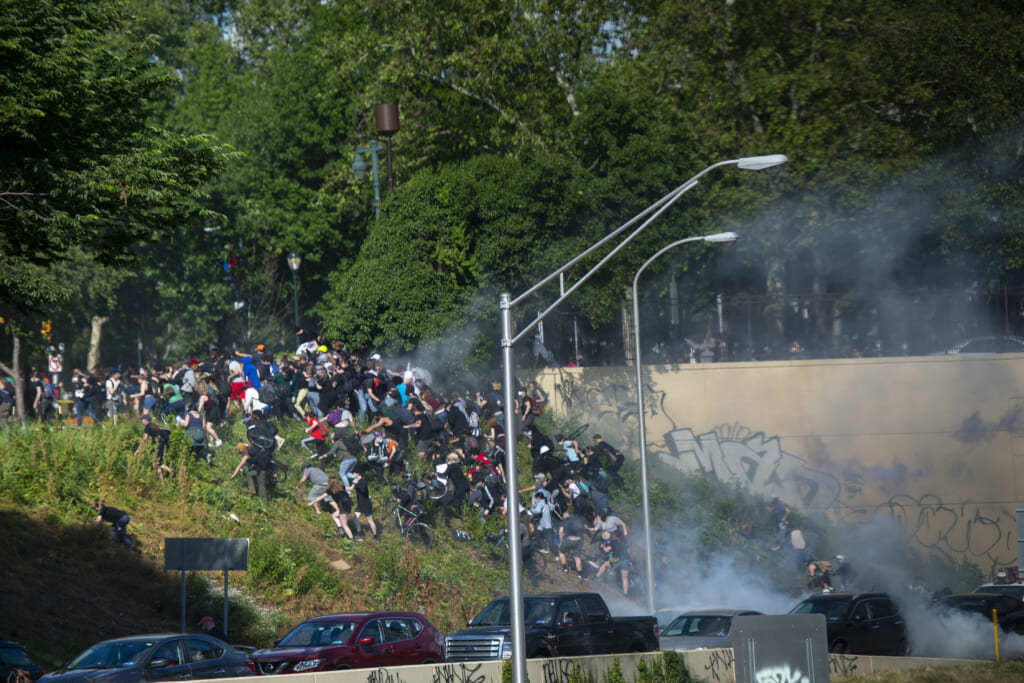 Protesters race up a hill after being shot by tear gas after a march through Center City on June 1, 2020 in Philadelphia, Pennsylvania. (Photo by Mark Makela/Getty Images)

Police initially said their forceful response was due to a state trooper trapped on the highway that they were trying to rescue from aggressive protesters. The incident was recorded on video, which shows that the trooper’s vehicle was empty and that the only aggression was a protester spray painting it.

After a reenactment of the events by the New York Times, Philadelphia mayor Jim Kenney and police chief Danielle Outlaw, the city’s first African-American female police chief, both apologized.

A SWAT team member who was shown pulling back the surgical mask of a protester on her knees to pepper-spray her in the face is on his way to being fired, according to the Inquirer.

Three federal lawsuits were filed Tuesday with a variety of plaintiffs, from ages 18 to 50, for a total of 146 people, according to the Inquirer. The lawsuits allege that they suffered physical injuries and emotional trauma, and that their civil rights to peaceful protests and freedom of expression were violated in “extraordinary abuses of police power.”

“The city’s actions on 676 were simply stunning,” says Jonathan Feinberg, who is one of the lawyers representing the protesters. “They caused a wholesale violation of peaceful protesters’ civil rights. Such large-scale and unlawful conduct calls for accountability, and that’s why we have brought this case.”

Another group is suing due to the police response to looters along the 52nd street commercial strip in West Philadelphia. Military tanks, tear gas, and pepper spray was used to disperse looters, including those who burned two police vehicles, but those tactics also impacted innocent bystanders, including residents of the community. Similar looting of the downtown commercial district was met with much less force.

Thomas Tuchel: If both legs were intact, you could have seen my 40-meter sprint
PSG saved Tuchel's pet: Choupo-moting got everyone for free, managed not to score from a centimetre, and now pulled Paris to the semi-finals of the Champions League
Gian Piero Gasperini: The worst part is that we were so close. I can only thank the guys
Neymar was the player of the match Atalanta-PSG. He gave an assist
ПС PSG suffered through the entire quarter-final and turned it over in 149 seconds. Lifted the Italian curse and went so far in the Champions League for the first time in 25 years
ПС PSG's pain was transformed into happiness: in three minutes, the suffering stars turned into celebrating kings
The club from Italy won't win the Champions League for the 10th year in a row. This is an anti-record
Source https://thegrio.com/2020/07/14/over-100-protesters-sue-philadelphia-police/