EXCLUSIVE: Director David Gordon didn't know much about Oscar Pistorius' 2013 trial but admitted it only took a few days of research to understand how "layered" and "complicated" his story is.

ESPN+ is set to air a four-part "30 for 30" documentary series titled "The Life and Trials of Oscar Pistorius," which details the former South African sprinter's rise to notoriety after competing in the 2012 London Olympics despite having two prosthetic legs.

It also covers Pistorius' ultimate downfall after he was convicted of murdering his model girlfriend Reeva Steenkamp in February 2013. The 33-year-old is currently serving a 15-year prison sentence and will be eligible for parole in 2023.

"I think [the ability] to remain impartial is something that I've done throughout all my films. I didn't come ... with any particular preconceived ideas. I didn't follow the trial particularly," Gordon told Fox News.

Gordon believes he tells a fair story with 65 people in the series commenting on various events. "There was another 55 we interviewed but didn't make it into the final cut," he said.

"I think the biggest challenge was trying to find out who Oscar was," Gordon said. "He had an awful lot happen to him at a very young age. He went through the trauma, obviously, of having both his legs amputated. What makes this a spectacular story is that before Valentine's Day 2013, [Oscar] had an amazing story, but the thing that everyone loves is the downfall, the total fall from grace."

And as Gordon points out, only "[Oscar] knows exactly what happened that night. And if you believe his version that he clearly made the most dreadful, tragic error, then, of course, he is deserving of sympathy, if that's what you want to give to him. I think that's all a very personal view." 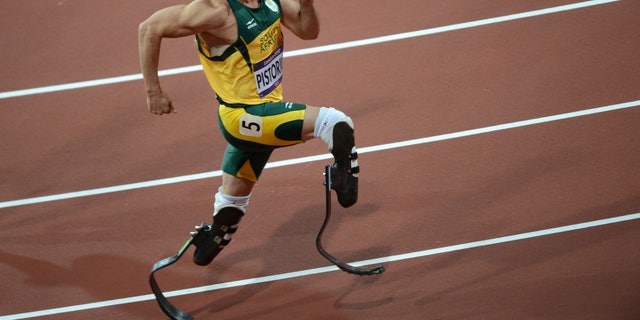 South Africa's Oscar Pistorius competes in the men's 400m semi-finals at the athletics event during the London 2012 Olympic Games on August 5, 2012 in London. (JOHANNES EISELE/AFP via Getty Images)

Pistorius claimed that he mistook Steenkamp for a burglar and shot her, while prosecutors argued that it was premeditated. He shot her four times with his 9mm pistol through a closed toilet cubicle door.

The filmmaker says the project doesn't lead the audience in one way or another. "I think it really depends on what your viewpoint on humanity is," Gordon said.

But he guarantees that "you'll change your mind throughout."

"The Life and Trials of Oscar Pistorius" premieres Sunday on ESPN+.

Bulykin about the Champions League: I Want to see Loko at least in 3rd place to watch their matches in European competitions in the spring
Liverpool first time not conceded in the first two rounds in the Champions League group
20-year-old Felix scored 2 goals for Red Bull. Only Aguero was younger when he did a double for Atletico in the Champions League
Rybus about 1:2 with Bayern: Loko tried to play football, not just sit in defense and kick the ball forward
Real Madrid is 4th in the group. We lost until the 93rd minute after the double of our son tyuram (he started in Barcelona)
It is important not to impress, but to score. Another power from the Loco to the words of Nikolic after the match
Andre Villas-Boas: city spent a billion and the coach is a phenomenon. Marseille don't have money for Guardiola, so you have AVB and his tactics
Source https://www.foxnews.com/entertainment/oscar-pistorius-documentary-trial-murder

All new i20 launching on Nov 5; Hyundai opens bookings