At the onset of the coronavirus pandemic, with travel restrictions in place worldwide, we launched a series — The World Through a Lens — in which photojournalists help transport you, virtually, to some of our planet’s most beautiful and intriguing places. This week, Randy Harris shares a collection of images from the shores of Cape Cod.

When I first met Chris Crobar, he was a half mile from the shore, on the tidal flats that stretch far out into Cape Cod Bay. It was 5 a.m., and I was out for a walk at low tide. From a distance, I saw what looked like little black sails in the water.

Chris was a spectacle: alone with his boat and table in the middle of the bay — like an artist with his easel, painting a fiery sunrise. He stood there fastidiously scraping the barnacles off his oysters, then tossing them back into the cages where they’ll sit for a couple of years on the floor of the bay. 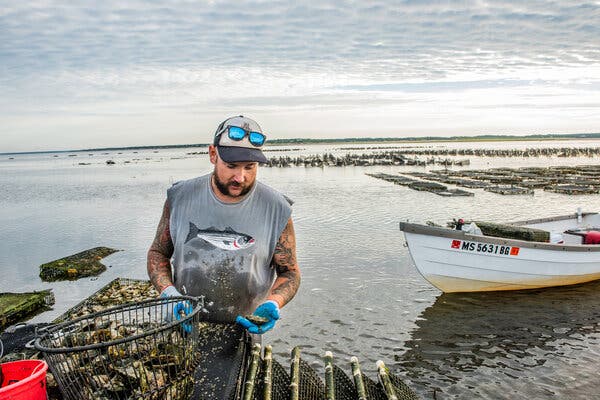 Chris Crobar at work with his boat and table. He has a two-acre farm grant in Cape Cod Bay.
Sizing oysters for the market.

Before the arrival of the Europeans, the native people of Cape Cod, the Nauset tribe, had an abundant supply of oysters. Crassostrea virginica, known as the American oyster (or the eastern, Wellfleet, Atlantic or Virginia oyster), was naturally flush in coastal areas and estuaries, where the rivers meet the sea. Oyster reefs were America’s coral reefs; oysters filtered the water — some adult oysters can filter 50 gallons a day — and fed a range of other sea life.

In the 18th and 19th centuries, new technologies — including developments in dredging, canning and transportation — began to transform America’s oyster industry. By the 1870s, a single schooner in Wellfleet Harbor could harvest 1.5 million oysters a day. Companies, including Sealshipt Oyster System, were commercially shucking, sealing and shipping oysters in vast quantities all over the country. The intensity of the industrial harvesting was unprecedented — and unsustainable.

A salt marsh near Hatch Beach, at low tide.

Today, because of pollution, development, overharvesting and disease, America’s natural oyster habitat is greatly diminished. Estimates in the last decade have placed the wild oyster population at some places in the country at just one percent of historical levels.

In some places in America, the wild oyster population is at a mere one percent of historical levels.

Modern-day aquaculture has changed the game. A company called Aquacultural Research Corporation, founded around 1960, produces shellfish seed — tiny juvenile oysters, also called “spat” — and sells it to local shellfish farmers. Chris Crobar is one of those farmers. A native of Eastham, Mass., he grew up working on his father’s clam boat. Today, he sets his hours not by the clock, but by the tide. He has been raising oysters for five years on his two-acre farm in the Cape Cod Bay — just beyond First Encounter Beach, the location of the first meeting between the Nauset people and the Pilgrims.

A seagull attempts to break open a quahog by dropping it from the air.

Cape Cod is as unique as its oysters. Depending on the location, the high tidal waters flush the oysters with a varying mix of freshwater and saltwater. This helps create nuanced flavors.

Wellfleet, which juts farther out into the bay, is famous throughout the world for its briny oyster. In Barnstable, Chatham and Orleans, the fresh tidal water and sweet marsh algae combine to create a sweet and earthy flavor profile. Eastham oysters are known for being both mildly briny and earthy.

With oyster knife in hand, Chris scrapes barnacles off an oyster.

Paul Wittenstein, the general manager of A.R.C., explained how the hatchery produces its seed: In midwinter, the hatchery places adult shellfish in warm water that’s rich with algae, which causes the shellfish to spawn. The hatchery then catches the eggs, hatches them and grows them in their tanks until spring, when they’re moved into the A.R.C.’s nursery system. From there, they continue to grow before being measured, counted and sold to farmers.

After obtaining his oyster seeds from A.R.C., Chris initially grows them in mesh bags, using the French rack-and-bag system. Later, the oysters are transferred into metal grow-out cages, where they sit on the bottom of the bay from one-and-a-half to two years — until they reach 2.5 to 3 inches, to be marketed as “petite” or “cocktail” oysters, or 3 inches or more to be marketed as “select” oysters. (He also digs for wild razor clams and quahogs.)

An array of oyster bags.
Chris attaches a bag of seed to a rack, using what’s called the French rack-and-bag-system.

Lately there has been a surge in aquaculture farming, especially with oysters. But yields can vary significantly from year to year. This past winter was mild, with little to no ice. Seed did well. Many farmers were expecting a good year. But with water temperatures increasing to over 80 degrees at high tide, both algae blooms and crashes can result, leaving the oysters with nothing to eat.

Oyster farming, in other words, has always been an unpredictable business. And the coronavirus pandemic has hit the industry hard: With fewer people dining out, farmers are sitting on their inventory. Some have feared a collapse of the market.

The sun rises along a trail at Cape Cod National Seashore.

But Chris is more hopeful. “It’s important to me to be optimistic about the future,” he said. “For now we have to keep planting and raising shellfish, hoping that things will eventually get back to normal.”

“Fisherman adapt,” he added, “and always find a way to keep moving forward.”

Rostov will reject the offer of Genoa for Shomurodov, as they want more than 8 million euros (SE)
Mendes earned about 20 million euros during the summer transfer window
Carragher on Arsenal: Liverpool are a few years ahead, but Arteta can take them to the Champions League
Roma is the favorite in the fight for Jovic. Real Madrid have offers from Inter and Milan
Ruben Dias has arrived in Manchester to complete his move to city
Van Dijk's transfers are the key to Liverpool's victory. They killed any attempts of Arsenal to press
Tony Adams: Leno is not a top-4 goalie. For me, Martinez was number one
Source https://www.nytimes.com/2020/08/10/travel/cape-cod-oysters.html

Teacher sentenced to death for poisoning kids with nitrite-laced porridge

Trump and Biden To Meet in Pivotal First Presidential Debate

One Million COVID-19 Deaths ‘a Very Sad Milestone’, but Virus Suppressible: WHO

Leo Terrell: Can Joe Biden still win back my vote?

Twin girls struck on I-70 near Hagerstown, 1 killed

Grand jury recording in Breonna Taylor to be made public