In Nov. 1996, the Hangman's Tree Bar in the California Gold Rush town of Placerville, also known as Hangtown in its mining camp heyday, decorated its facade with a dangling effigy.

In Nov. 1996, the Hangman's Tree Bar in the California Gold Rush town of Placerville, also known as Hangtown in its mining camp heyday, decorated its facade with a dangling effigy.

A Sierra Nevada foothills city with a history of vigilante justice is considering scrubbing a controversial image from its official logo.

The City of Placerville logo shows a miner panning for gold during the California gold rush. In the background is a tree with a noose dangling from its only branch.

Today nooses are most commonly associated with lynchings of Black people.

But City Manager Cleve Morris told CBS13 the image on the logo refers to Placerville’s history of frontier justice. On Tuesday evening, the City Council reportedly will decide whether to remove the noose. 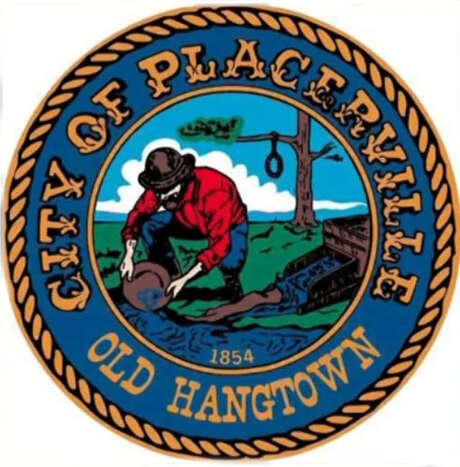 The City of Placerville, Calif., logo (from its Facebook page) shows a miner panning for gold in front of a tree with a hangman's noose. The city reportedly will decide whether to remove the noose at its Tuesday, July 14, 2020, meeting.

The symbolism harkens back to the 19th century when Placerville, formerly Hangtown and Old Dry Diggins, developed a reputation for speedy capital punishment. The town began being called “Hangtown” following an incident in 1849.

Supposedly, a local gambler named Lopez left a local saloon after a successful day at the card tables. Three men intending to relieve him of his winnings jumped him, but he was able to fight them off with the help of townspeople who came to his aid. Soon the thieves were captured. In addition to the attempted robbery, the trio were accused of being wanted for murder.

Their trial lasted all of 30 minutes. A mob demanded “death by hanging” after a unanimous guilty verdict was read.

“They took law into their own hands at that time and there were people that were hanged for their crimes,” Morris said.

The stump of the hanging tree now sits in the cellar of “The Hangman’s Tree” tavern on Historic Main Street.

Placerville will still keep its nickname, “Hangtown” or “Old Hangtown,” for now. The council reportedly will not act on a proposal to change the nickname at Tuesday’s meeting.

In the last three meetings of Barca and Bayern in the playoffs, the future winner of the Champions League passes on
Chelsea conceded 7 goals for the first time in two matches of the play-off series in European competitions
Buffon-Pirlo: Now I have to call you mister!? Good Luck, Andrea
Insigne is the first Italian to score for real at the Bernabeu and Barca at the camp Nou
All 11 Barca players touched the ball before Messi's goal against Napoli
Cakir cancelled out Messi's goal and awarded penalties to Barca and Napoli
Messi has been scoring in the Champions League for 16 years. Raul did this for 17 years
Source https://www.sfgate.com/bayarea/article/Placerville-may-remove-noose-from-city-logo-15408118.php

After a White man repeatedly erased girl's 'Black Lives Matter' chalk drawing in front of her home, neighbors stepped in to show support

Brewing in America: The nation's craft beer industry has a diversity problem but it's trying to fix it

What's wrong with Tiger pitcher Boyd? Maybe not as much as you'd think