A manhunt was underway this week for an Ohio drug suspect who fled from a courtroom Tuesday, according to reports.

The suspect, identified as Nickolaus Garrison, 34, of Hillsboro, broke free of sheriff’s deputies during a pat-down and bolted down the stairs of the Highland County Courthouse after he was sentenced on a felony methamphetamine charge.

Video released by the courthouse showed Garrison running out of the room before Deputy Ben Reno chased him into the hallway and dove over a railing in a last-ditch effort to capture the suspect, according to Cincinnati's WKRC-TV. Garrison has been on the run since Tuesday's escape, while Reno suffered four broken ribs and a concussion after the fall.

“The deputy, unfortunately, went down the stairs headfirst in an attempt to try and catch him,” said Highland County Sheriff Donnie Barrera. “I went out to the hospital and visited him when he was getting treated at Highland District Hospital. He was in good spirits at that time."

Barrera said the sheriff's office was following up on leads and is asking for the public's help in identifying Garrison's whereabouts.

CINCINNATI PROFESSOR ON LEAVE AFTER CALLING COVID-19 THE 'CHINESE VIRUS' 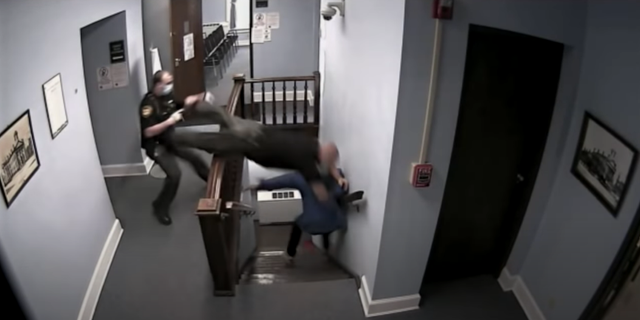 “At the time of the incident, he did have blue hair. Information we received now is that he has shaved his head,” the sheriff added, according to the station.

A judge sentenced Garrison to six months in jail, with an additional 530 days because he committed the offense while under community control for a prior drug conviction, The Times-Gazette of Hillsboro reported.

Hans-Dieter flick: I Hope Alaba will sign a contract with Bayern. Our club is one of the best in the world
Diego Maradona: Messi gave Barca everything, brought them to the top. He was not treated the way he deserved
Federico Chiesa: I hope to leave my mark in Juve. We will achieve great results
The Coach Of Benfica: I don't want us to look like the current Barcelona, it has nothing
Guardiola on returning to Barca: I'm happy at Manchester City. I hope to stay here
Fabinho will not play with West ham due to injury
Ronald Koeman: Maradona was the best in his time. Now the best Messi
Source https://www.foxnews.com/us/ohio-convict-flees-courthouse-escape-caught-camera?utm_source=feedburner&utm_medium=feed&utm_campaign=Feed%3A+foxnews%2Fnational+%28Internal+-+US+Latest+-+Text%29

Even from childhood bedrooms, socially distanced students work to get out the vote

Boo moon: Did you know that Halloween is an astronomical holiday?

Megan Rapinoe and Sue Bird announce they are engaged

Asia Today: Australia to spend on vaccines for wider region

‘I need my eyes,’ says victim of paintball gun shooting who lost sight in one eye, as Chicago police arrest 6 in recent attacks

A New Orleans police officer on patrol in the French Quarter was shot in the face by a pedicab passenger, superintendent says

Mexico rebukes governor for call to vote against Trump

Hugo Chavez’s ex-nurse indicted in US for money laundering

Iranian hackers who posed as the Proud Boys accessed voter data in one state, feds say

Four years of Trump has made the world less safe, and the damage might be irreversible

'Chappelle's Show' coming to Netflix and HBO Max in November

NBA, players extend deadline for opting out of CBA

Cuomo to wait until after 2020 election before taking budget action, report says

What Keeps Facebook’s Election Security Chief Up at Night?

Do Dunkin’ and Arby’s Go Together? Private Equity Group Bets $11 Billion They Do