The legal team for Thomas Lane, one of the former police officers charged in the death of George Floyd, filed a motion Wednesday to dismiss the charges, according to CBS Minnesota. Lane has been charged with aiding and abetting second-degree unintentional murder and second-degree manslaughter.

Lane's attorney, Earl Gray, said his client did not intend to further a crime when he held down Floyd's legs and feet, and that he "did not intentionally aid, advise, hire, counsel, or conspire with (Derek) Chauvin or otherwise procure Chauvin to commit second degree murder," CBS Minnesota reported. 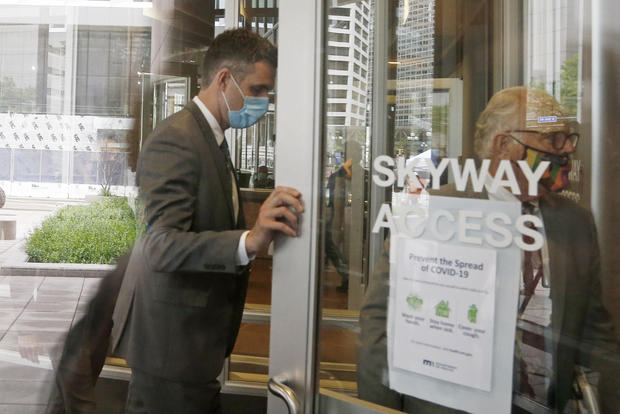 The legal team released multiple documents to support dropping the charges, including transcripts from two body cameras that were worn during the fatal encounter. According to CBS Minnesota, the transcripts document Floyd telling officers that he doesn't want to be left alone in the squad car, that he's claustrophobic, and also include calls from bystanders to let Floyd get up.

The transcript also shows that Lane asked if Floyd should be turned on his side. Chauvin said no, according to CBS Minnesota.

Lane's legal team also released the transcript of a June 10 interview, in which Lane said he could see Floyd breathing even after he'd stopped yelling, CBS Minnesota reported. Lane said he eventually noticed Floyd wasn't moving, and asked another officer, J. Alexander Kueng, to check his pulse. By that time, the officers couldn't find a pulse, according to the complaint.

The other former officers — Kueng and Tou Thao — face the same charges as Lane. Kueng, Thao, and Lane have all been released on bond.

Alexis Sanchez: I really wanted to stay at Inter. I found a family here
Emil Heskey: Salah should have moved to another club if Liverpool had not taken the Premier League
Roma are discussing with Manchester United the purchase of Smalling
Belenov – the best player of Ufa in the 2019/20 season
Seedorf on real's chances of passing city: Hard, but nothing is impossible
Hennessy on the cancellation of the ban of Manchester City: this is a slap in the face of UEFA
Lopetegi about éver Banega: When he plays well, the whole of Seville plays well
Source https://www.cbsnews.com/news/thomas-lane-minneapolis-officer-charged-in-george-floyd-death-files-to-dismiss-charges/