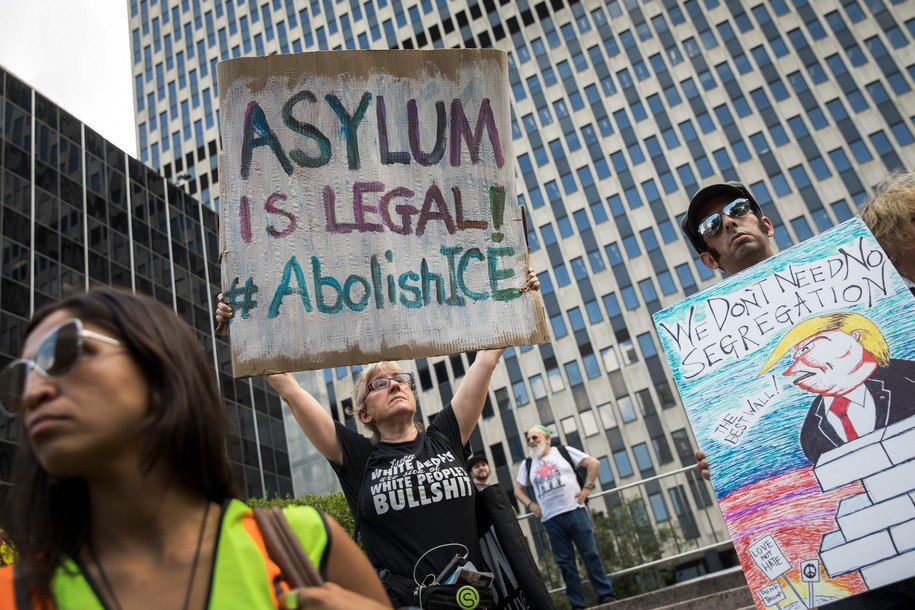 The judge from an ongoing lawsuit demanding Immigration and Customs Enforcement (ICE) release detainees amid the novel coronavirus pandemic has made public pages of handwritten letters from immigrants detained at a number of Florida facilities, who in their own heart-wrenching words say they fear for their lives under ICE’s watch.

One detained immigrant, Rodney London, said “he hasn’t been able to speak to his deportation officer because ‘their union would not allow them to come to work here because of the pandemic,’” Miami Herald reports. So too dangerous for officers to visit, but apparently fine to keep London languishing there. “This shows a total disregard for our safety and well being, and should not be the way human beings act especially not during this COVID-19 pandemic,” London wrote. “No one should be forgotten or left to die at any facility in the United States of America, especially now.”

The judge in the case had earlier this month ordered ICE to give people detained at three Florida facilities soap, cleaning supplies, and masks to protect them against COVID-19, Miami Herald reported. “The judge stopped short of ordering that detainees be released, but the ruling—which was critical of the government’s treatment of people in ICE custody—was still a victory for the detainees who filed the lawsuit back in April,” the report said.

But the letters made it clear U.S. District Judge Marcia Cooke must go further. Miami Herald reports that one letter signed by 100 detainees asked for the court “to ‘please come see us immediately or send investigators’ because ‘we were served spoiled food, we’re starving, bathrooms are bad, violations of rights … beds are two feet apart and not six feet apart. We may die and are afraid,’ the collective handwritten statement said.”

Under the ongoing lawsuit, Cooke ordered ICE officials to lower capacity at the three facilities to 75%, but that simply hasn’t been enough when immigrants have died from COVID-19 after being held in custody. One man, Carlos Ernesto Escobar Mejia, died in a hospital on May 6 after being denied release from California’s Otay Mesa Detention Facility

Yes, soap, cleaning supplies, and masks are important, but detainees should always have been safely released from the start, as advocates and public health experts had long been urging. ICE for months been refusing to release all children and parents from detention by claiming they’d be safer in custody, but COVID-19 has since hit detained families. If ICE won’t protect people, and it’s clear it doesn’t care to, the courts must step in. Read more about the detainees’ letters here.

Shakhtar forward Moraes before the semi-final with Inter: the Matches we always want
Ocampos on Sevilla – Manchester United semi-final: Historical confrontation. We're really hungry
Chelsea can give Bakayoko on loan to Milan for 3 million euros with the right to buy out for 35 million^. Milan intends to return Chelsea midfielder Tiemoue Bakayoko, who played for the Rossoneri on loan in the 2018/19 season
Lopetegui Pro 1-0 with Wolverhampton: Sevilla deserved to win against a very good team
Kashtru about the defeat of Basel: a Difficult match, but Shakhtar dominated almost all the time
Nuno about 0:1 with Sevilla: Disappointment. Wolverhampton conceded too often in the final minutes
Immobile about Newcastle: They called my agent when the sheikhs bought the club
Source https://www.dailykos.com/stories/2020/7/3/1956135/--No-one-should-be-forgotten-or-left-to-die-ICE-detainees-plead-for-release-in-handwritten-letters

In California Sen. Kamala Harris, Biden chooses a VP hailing from our most diverse state

How Kamala Harris Found the Political Identity That Had Eluded Her

Chicago Mayor Lori Lightfoot on California Sen. Kamala Harris as VP pick: ‘This is not a woman to be trifled with'

Residents and protesters clash at rally in Englewood

Portland beats Orlando 2-1 to claim MLS is Back championship

How Black women secured Kamala Harris' spot on the ticket