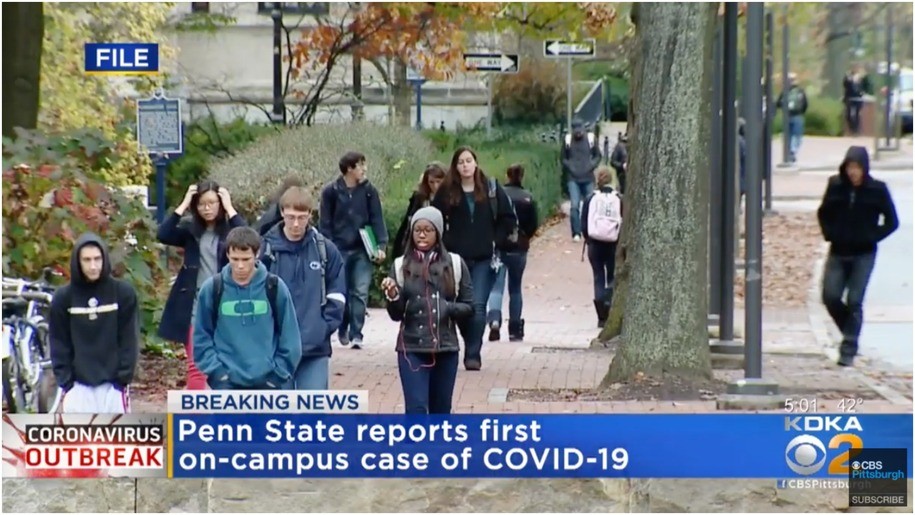 A 21-year-old Penn State student has died from complications related to COVID-19, and the university is now working to track down those who have had contact with the student, the school said in a statement Thursday. Juan Garcia was living off-campus when he became sick and decided to travel home June 19 to Allentown, which is about 165 miles east of the university. While home, Garcia was tested for COVID-19 on June 20 and died 10 days later, according to the school.

“We are profoundly saddened to learn about Juan’s untimely death during this pandemic,” Vice President for Student Affairs Damon Sims said in the statement. “While I did not know Juan personally, we have learned through conversations with those closest to him that this young man had a remarkable spirit and was greatly loved. I know our entire campus community sends our deepest condolences to his family and friends as they grieve this unthinkable loss. It is a poignant reminder that no one among us is immune to the worst consequences of this virus.”

Juan Garcia, a @penn_state student studying in @PSUEMS, will forever remain in the hearts and spirit of the entire Penn State community.

And please Ã¢ÂÂ wear a mask. Only together will we overcome this virus.

Garcia's death happened as the school is preparing to reopen Aug. 24, with double-room residence hall occupancy, The New York Times reported. Campus instruction is, however, planned to end Nov. 20, according to the university. The news has triggered criticism on social media, with many condemning what are believed to be the school’s economic priorities. Penn State accounts for about $128 million annually in Centre County, where the university is located, the Times reported.

“What I've heard is ‘we simply have to,’ ‘life as we know it will stop’ if we can't send kids back to school, open up our colleges, get people back to work as fast as possible,” Gregg Gonsalves, a public health professor at Yale University said in a Twitter thread Sunday. "What if the price of reopening is death?”

He also shared a tweet from feminist author Mona Eltahawy, who argues “there is no going back to normal after a pandemic.” “At least 365,000 people have died around the world during this pandemic,” she said in late June. “That’s what normal brought us. F—k normal.”

WARNING: This video contains profanity which may not be suitable for younger readers.

Penn State isn’t the only university struggling to balance reopening needs with public health concerns. Nearly all of the country's 4,300 colleges and universities are promising a mix of online and in-person options for students, and presidents at the institutions are hoping multiple testing locations, reenvisioned academic formats, and tight social distancing guidelines will help protect students and staff members, USA Today reported.

Terry Hartle, senior vice president with the American Council on Education told the newspaper: “At the end of the day, a lot of it is going to depend on young people showing discretion and good sense.”

Pennsylvania has seen 6,749 deaths related to COVID-19, including three reported Saturday, The Patriot-News reported. The total number of confirmed coronavirus cases increased by 634 Saturday, bringing the state's total to 89,375.

Still, the statewide counts pale in comparison to epicenters of the virus such as Florida and Texas. Texas is reporting almost 192,000 cases, and more than 190,000 people have been infected with the virus in Florida where Gov. Ron DeSantis has said he won’t shut down businesses again, according to CNBC.

Although Texas Gov. Greg Abbott ordered bars to close and began requiring people to wear face coverings in public, the state, which was one of the first to lift its stay-at-home order, has only required restaurants to scale back seating capacities. Harris County Judge Lina Hidalgo, whose county is experiencing a "non-linear increase" in COVID-19 related hospitalizations, told ABC’s “This Week” she is pushing for the state to implement a stay-at-home order.

German Count Zeppelin, heated underpants and Herbert Chapman. The final that started the great Arsenal of the 1930s
Klopp has signed a contract with adidas. Liverpool have an agreement with Nike
Jose Mourinho: Casillas and I have a good relationship. Over the years, they developed into an honest friendship
Tottenham will buy Heybjerg from Southampton for 15 million pounds. And will release Walker-Peters for $ 12 million. Southampton Midfielder Pierre-Emile Heibjerg is close to changing clubs
The Champions League will be finished under the new rules. The amendments will make it easier for goalkeepers to take penalties
UEFA will count 0:3 for clubs whose fault is due to the coronavirus will disrupt European Cup matches
15-year-old forward Mukoko trains with the Borussia Foundation. He will be able to play for Dortmund in November
Source https://www.dailykos.com/stories/2020/7/5/1958359/--No-one-among-us-is-immune-Penn-State-student-dies-of-COVID-19-complications

Men Always Make the Exact Same Comment to Me After Sex

Parenting's Latest Challenge: Working at Home While Schooling Your Children

'Shame on all of you': Texas wife blames Trump and Gov. Abbott for husband's COVID-19 death

Trump backtracks on mail-in voting, says it's OK to do in Florida

Cases of polio-like illness may increase among children, CDC warns

Hoda Kotb Is Totally Down for a Wild Mykonos Bachelorette Party!

New York's De Blasio is an 'absentee landlord,' the 'least-liked mayor in the history of the universe': Gutfeld

Trump Doesn’t Know How to Campaign As an Incumbent

California man recounts harrowing escape from wildfire: 'I put the pedal to the floor'

‘Wearing goggles might become the norm’: Here are the best ones you can buy on Amazon

Conflicting reports on what caused the explosion

'Aliens built pyramids': Musk's tweet gets him invited to Egypt to clear suspicion

Kayleigh McEnany Confirms Trump Is ‘Not Considering a National Lockdown’

Chad Johnson claims he was ‘falsely’ accused of domestic violence

Paris Jackson says there is no label for her sexuality

Tom Del Beccaro: If Biden wins 2020 election, his policies would damage US in 3 major ways

Microsoft relax, Apple has no interest in buying TikTok