No cops were charged with Breonna Taylor’s death. This is how the system was designed.

People across the country are outraged that no police officers were charged with killing Breonna Taylor — but many couldn’t be shocked. Those who felt blindsided by the grand jury’s decision haven’t been paying attention. This year alone, the cries of protesters have made it very clear: You cannot reform a system that is working the way it was designed to.

Kentucky Attorney General Daniel Cameron underscored this reality when he delivered the news on Wednesday: “My job, as the special prosecutor in this case, was to put emotions aside and investigate the facts to determine if criminal violations of state law resulted in the loss of Ms. Taylor’s life.” 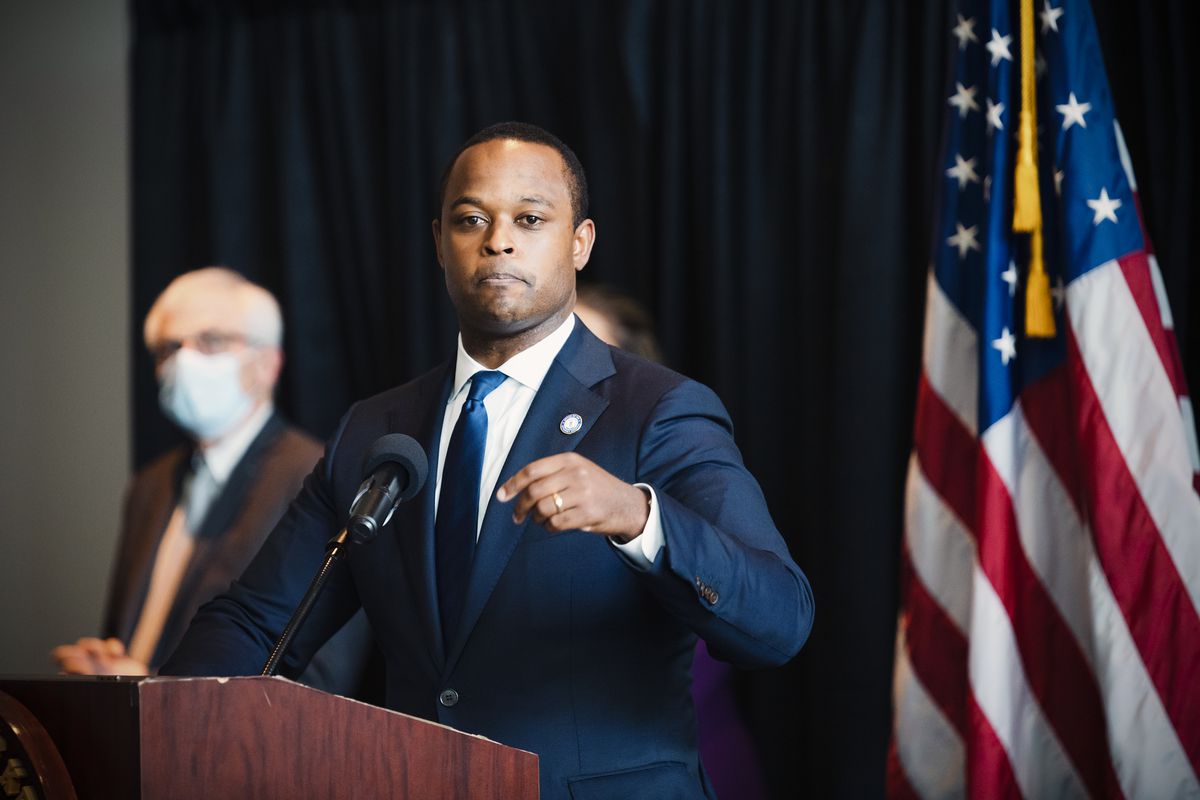 In those words, Cameron suggested that the law itself places Taylor’s life below the “duty” of the police officers who entered her property on March 13. The law makes it clear that because the officers were defending themselves, it was justified for Sgt. Jonathan Mattingly to fire his weapon into a Black woman’s apartment six times, while detective Myles Cosgrove simultaneously shot his weapon a whopping 16 times, unleashing the fatal shot that would end Taylor’s life. The police were justified in their actions because the law, and those sworn to uphold the law, made it so.

While a criminal indictment in the killing of Taylor might have felt like victory for some, she should not have been killed in the first place. The only justice would be Breonna Taylor still being alive. 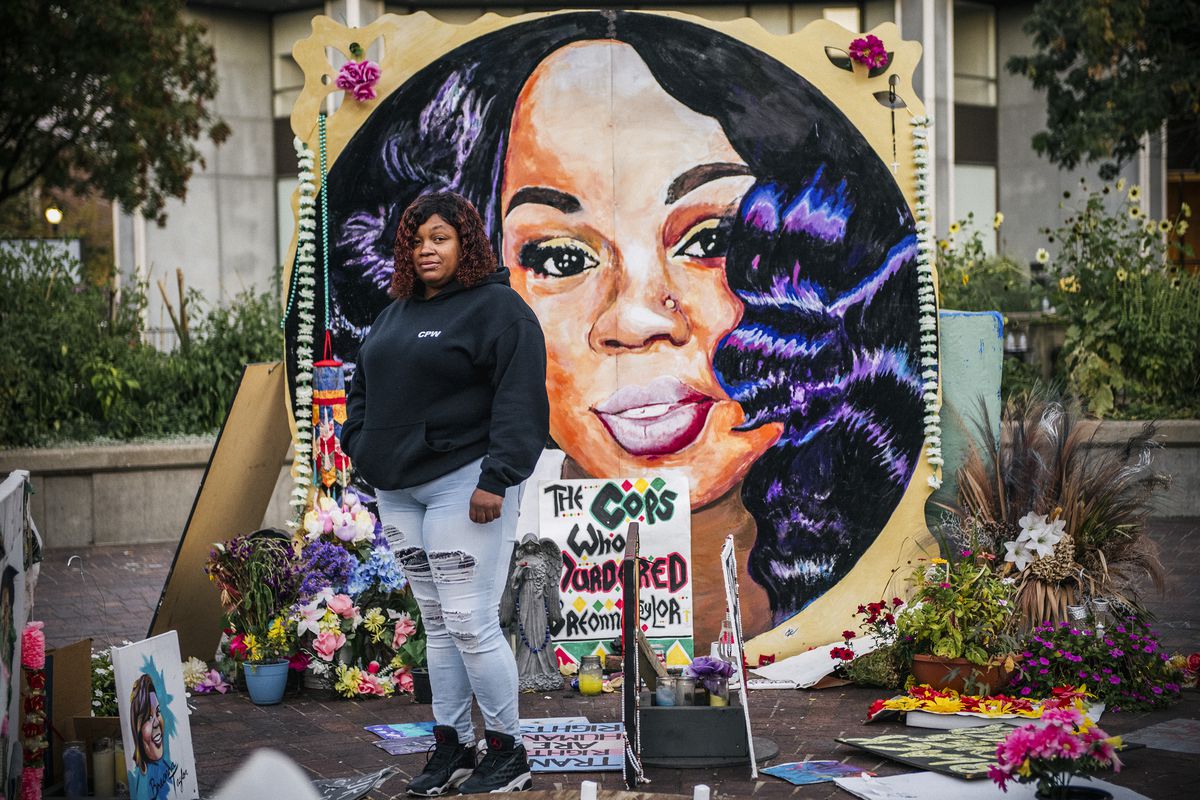 Tamika Palmer, Breonna Taylor’s mother, poses for a portrait in front of a mural of her daughter at Jefferson Square park on September 21.
Brandon Bell/Getty Images

For Breonna’s family, and for a society that claims it wants to do better by Black lives, questions linger: How many years behind bars would have been sufficient retribution for Taylor’s life? What would the arrest of Brett Hankison, Mattingly, and Cosgrove really mean for the hundreds of other cops who have taken the lives of other Black people just this year? What would it mean for the families of the victims whose names haven’t risen to national prominence? These are questions America is grappling with as we consider what is justice in a criminal system that has been systemically cruel to Black lives.

Breonna Taylor became a meme this year. It was impossible to scroll through social media without seeing an image pegged to the words “Arrest the cops who killed Breonna Taylor.” People plastered her name on T-shirts and counted the days since she had been shot dead. Meanwhile, Tamika Palmer, her mother, traveled around the country to speak on the sanctity of Black lives, and protesters urged lawmakers to defund the Louisville Police Department. People tried to hold all of these interests: The system, working as designed, needs to be dismantled while simultaneously bringing justice for a young Black woman.

Arrests may have seemed like a concrete action, but many knew deep down inside they weren’t coming. There was no way to get justice for Breonna because she was already dead.

That people took to the streets once more Wednesday from Washington, DC, to Louisville to Portland also seemed inevitable. Protests largely remained nonviolent: In New York, people walked across the Brooklyn Bridge in solidarity and gathered outside the Barclays Center chanting, “What’s her name? Breonna Taylor! Say her name! Breonna Taylor!”

In Louisville, where tensions have been high for months awaiting the attorney general’s announcement, hundreds of protesters were arrested and two police officers were shot, sustaining non-life-threatening injuries. Around the country, the mood was anger, sadness, and frustration. That people made space to cry into one another’s arms, chant, “Say Her Name!” and hold up signs calling for ways to rethink policing might be one small glimmer that we’re on our way to thinking bigger.

Help keep Vox free for all

Millions turn to Vox each month to understand what’s happening in the news, from the coronavirus crisis to a racial reckoning to what is, quite possibly, the most consequential presidential election of our lifetimes. Our mission has never been more vital than it is in this moment: to empower you through understanding. But our distinctive brand of explanatory journalism takes resources. Even when the economy and the news advertising market recovers, your support will be a critical part of sustaining our resource-intensive work. If you have already contributed, thank you. If you haven’t, please consider helping everyone make sense of an increasingly chaotic world: Contribute today from as little as $3.

Maradona on a gift for the 60th anniversary: The disappearance of the pandemic and the scudetto for Napoli
Barcelona will try to buy Eric Garcia again in January. The deal must be approved by the club's new President
Sulscher about 5:0 with Leipzig: the Reaction of Manchester United after the brutal 1:6 was amazing
Messi scored the 100th penalty of his career against Juve. He has 78 goals
Rapinoe on the fight against racism: Ronaldo and Messi could do a lot if they decided to do it
Van Dijk successfully operated after a knee ligament injury sustained in the game against Everton
Eriksen on why he doesn't play enough for Inter: Ask Conte
Source https://www.vox.com/2020/9/24/21454089/breonna-taylor-protests-louisville

Karnataka cop responsible for tackling betting racket, arrested for running one himself

Big Tech is strengthening its hold on the US economy

2020 Election Live Updates: Trump and Biden head to the Midwest

Expert Tips on Managing Remote School for Your Child With ADHD

Netflix Partners With Brooklyn Museum For ‘The Queen and The Crown: A Virtual Costume Exhibition’

Disneyland is more than a job for some workers. A wave of layoffs will hit Sunday

This App Makes it Easy to Manage Remote Computers

From Madea to Gone Girl: See All of Tyler Perry's Best Roles

RHOP's Gizelle Bryant on Race, Voting and Why the 2020 Election Is "the Most Important" Ever

One Good Thing: A nonfiction portrait of witchcraft that becomes a spiritual quest

Trump says Supreme Court will have aided a Biden win

Don Jr. dismisses coronavirus deaths: ‘The number is almost nothing’

Trevor Lawrence out with coronavirus: Who are Clemson's backup quarterbacks?

‘The Mandalorian’ on Disney+: 5 Things You May Have Missed in Chapter 9

Five ways the Russians could wreak havoc on the election

No Progress On COVID-19 Relief Bill

The Latest: Trump MN rally capped at 250 at state insistence

Why the US Military Would Welcome a Decisive 2020 Election Win

US Faces Record Surge of Coronavirus Cases as Election Looms

Warren and Other Democrats Push 'Fundamental' Reform of Capitalism

Abbreviated Pundit Roundup: COVID-19 is driving the election, and Donald Trump will pay the piper

7 Sleep Products to Help You Adjust to Daylight Savings

NBA legend wants cannabis industry to open up to "everybody"

Justin Herbert and the Chargers Veer Happily Off Course

Oscars: ‘The Last Ones’ to Represent Estonia in International Feature Film Category

What you need to know about coronavirus on Friday, October 30

Sky History’s ‘The Chop’ Gets the Chop Amid Nazi Controversy

Qatar may charge officials behind forced vaginal exams at airport

Whether it's President Trump or Biden, the fight for racial justice is crucial

Why Democrats are favored to take back the Senate

Who Will Win Florida? What Polls Say About an Eternal Mystery

With Many Campuses Closed, Will College Students Turn Out To Vote?

How do you put on a comedy show when laughter is a risk?

Vote Smarter 2020: How Are Winners Projected Before Votes Are Counted?