More than six months after emergency medical worker Breonna Taylor was shot dead by police in her Louisville home, a grand jury has indicted one officer in relation to shooting into her neighbor's apartment — but no officers were charged for their role in Taylor's death. Former officer Brett Hankison was indicted on three counts of wanton endangerment and two other officers who opened fire were not indicted.

Kentucky Attorney General Daniel Cameron announced the results of the grand jury proceedings in Frankfort following months of rallies, with protesters demanding that the officers involved in Taylor's death be charged. Two of the officers who opened fire, Jon Mattingly and Myles Cosgrove, were justified in their actions, Cameron said. The officers were previously placed on leave, while Hankison has been fired.

The death of the 26-year-old Black woman is among several police shootings that have galvanized a nationwide push for police reform and racial justice. Louisville has been on edge for days awaiting a charging decision in the case, with rumors swirling but no clear indication of when it would come.

Protesters took to the streets in Louisville after the decision was announced, chanting, "No justice, no peace." Some were seen crying, reports CBS affiliate WLKY. 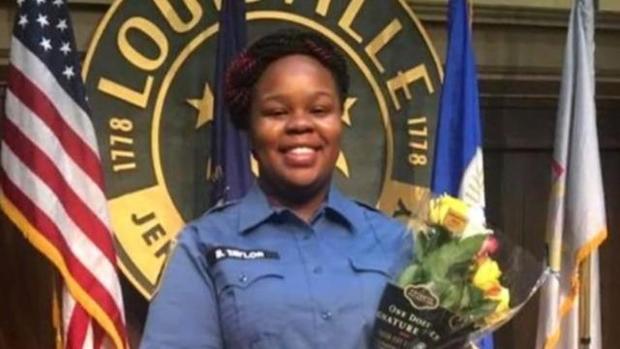 According to Cameron, a witness said officers both knocked and announced their presence before they raided Taylor's home March 13 in a search linked to a drug investigation, meaning the warrant was not served as "no knock." He said when no one answered, officers breached the door. Mattingly, he said, was the only officer to enter the apartment. He said Kenneth Walker, Taylor's boyfriend, fired a shot that hit Mattingly. Officers returned fire and six bullets hit Taylor, one of which was fatal, Cameron said.

Walker, a licensed gun owner, has said police did not announce themselves and that he fired in self-defense because he thought someone was breaking in.

Hankison fired 10 shots from outside, with some bullets hitting the neighboring apartment, where there was a man, a child and pregnant woman. None of his bullets struck Taylor, Cameron said. The charges allege Hankison endangered Taylor's neighbors, but Cameron said Mattingly and Cosgrove were justified in their use of force when they opened fire because Walker had fired his gun.

"According to Kentucky law, the use of force by [Mattingly] and [Cosgrove] was justified to protect themselves," Cameron said. "This justification bars us from pursuing criminal charges in Miss Breonna Taylor's death."

We are seeing live photos of protesters crying in the street learning of the charges, lack of charges against the three @LMPD officers involved in the raid that killed #BreonnaTaylor pic.twitter.com/3kFtiegs6A

Cameron said none of the three officers were involved in obtaining the search warrant, which was linked to a drug investigation into Taylor's ex-boyfriend, who did not live there. No drugs were found in Taylor's home. The warrant is under review as a part of a federal investigation, he said.

Kent Wicker, an attorney for Mattingly, said the grand jury's decision not to indict Mattingly or Cosgrove shows "that the system worked and that grand jurors recognized and respected the facts of the case."

"The death of Breonna Taylor is a tragedy," Wicker wrote. "But these officers did not act in a reckless or unprofessional manner. They did their duty, performed their roles as law enforcement officers and, above all, did not break the law."

Cameron called Taylor's death a tragedy but said it was his job to put emotions aside and determine whether criminal statutes were violated.

"There is no doubt this is a gut-wrenching and emotional case, and the pain many people are feeling is understandable," Cameron said. "I deeply care about the value and sanctity of human life. It deserves protection. And in this case, a human life was lost. We cannot forget that."

Six current officers, including Mattingly and Cosgrove, are under internal departmental investigation. The three criminal charges of wanton endangerment against Hankison are class D felonies and carry possible sentences of five years per count. 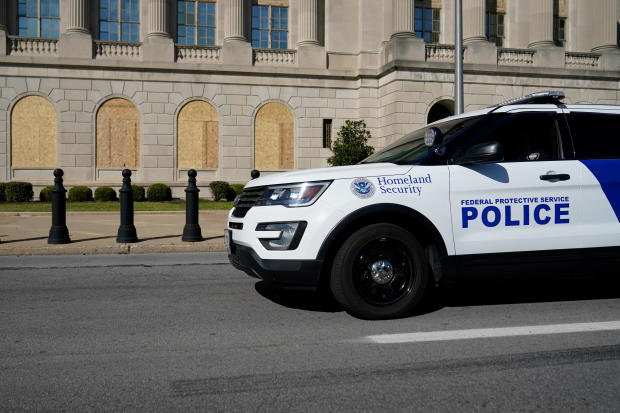 Federal Protective Service Police officers patrol outside of the U.S. Courthouse in Louisville a day before a grand jury announced an officer involved in a raid that killed Breonna Taylor would be indicted on lesser charges. BRYAN WOOLSTON / REUTERS

Louisville mayor Greg Fischer last week announced a $12 million settlement with Taylor's family over a civil lawsuit in the case, but her family has made it clear full justice would mean seeing the officers criminally charged.

Speaking before the announcement Wednesday, Fischer called for demonstrators to remain peaceful. Kentucky governor Andy Beshear authorized the deployment of a portion of the Kentucky National Guard to Louisville.

Fischer announced a citywide curfew overnight from 9 p.m. to 6:30 a.m. in addition to other safety measures already in place, such as restricting traffic and parking in the downtown area. He said Louisville city buildings would be closed and he called on employers to allow workers to work remotely. Some downtown businesses had already closed in anticipation of the announcement, with many seen boarding up their windows.

"I urge everyone to commit once again to a peaceful, lawful response, like we've seen here for the majority of the past several months," Fischer said.

Hans-Dieter flick: I Hope Alaba will sign a contract with Bayern. Our club is one of the best in the world
Diego Maradona: Messi gave Barca everything, brought them to the top. He was not treated the way he deserved
Federico Chiesa: I hope to leave my mark in Juve. We will achieve great results
The Coach Of Benfica: I don't want us to look like the current Barcelona, it has nothing
Guardiola on returning to Barca: I'm happy at Manchester City. I hope to stay here
Fabinho will not play with West ham due to injury
Ronald Koeman: Maradona was the best in his time. Now the best Messi
Source https://www.cbsnews.com/news/breonna-taylor-decision-louisville-police-wanton-endangerment-grand-jury/

Opinion: 24-hour voting should stick around long past the 2020 election

Kevin Young on the Righteousness of Voting Rights

Walmart to remove all guns, ammunition from U.S. stores in preparation for election

Peter Secchia, Confidant of Ford and Bush, Dies at 83

The Controlled Chaos of Madeline Hollander

4 Reasons Why Home Ownership Is Still a Fantastic Investment

Women Converge on Warsaw, Largest Protests in Poland in Decades

This is the Best Place to Meditate In Your Home

Work-from-home essentials that will make your life so much easier — including chairs, keyboards, laptop risers and more

The Subreddit /r/Collapse Has Become the Doomscrolling Capital of the Internet. Can Its Users Break Free?

Ronaldo recovers from virus and back for Juventus

What to Expect From Election Night TV Coverage

McDonald's cult classic, the McRib, is coming back

A Mars-sized planet is aimlessly zooming through the Milky Way

Stuck between allies in tech and labor, Newsom won't weigh in on Uber-backed Prop. 22

Michigan Voters Have a History of Voting for Change. Why Joe Biden Is Bullish in this Battleground

Is a Holstered Gun Voter Intimidation? What About Chanting ‘Four More Years’?