Lauren Sobel was leading two other climbers at the Mohonk Mountain Preserve around 3:30 p.m. Sunday when she lost her grip while trying to set protective gear about 70 feet up the rock face, according to New York State Police.

Sobel fell 50 feet and died at the scene, cops said.

Her dad, David Sobel, told The Post of the accident, “She was the lead, which means she’s on top.”

“She was three feet above her hook and she was going to put another one in and that’s when she fell and apparently there were three different safety measures taken and all three failed,” David explained, adding that Lauren was certified and trained to lead this type of climb.

She was on vacation climbing with two friends at the time, the dad said. 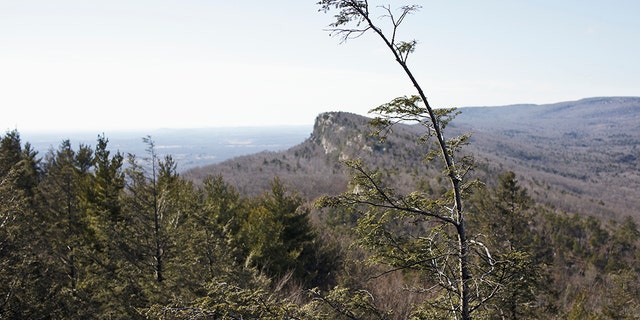 The 59-year-old father described Sobel as an adventurer and who loved the sport so much that she even climbed in Brazil and Mexico.

David said his daughter picked up the hobby after helping amputee military veterans learn how to climb at indoor facilities.

Lauren, a municipal bond analyst at Bank of America Merrill Lynch, “donated her time to helping military veterans who had amputated limbs learn to rock climb and she did that before she even knew how to rock climb because she believed in the cause,” David said while choking back tears.

“And from that, her interest developed and she became an avid rock climber,” he said.

Lauren even won an award through Bank of America for her hours of charity work with the veterans, David said.

David said Lauren climbed frequently whenever she had free time.

“She had a job but she would try to find the opportunity to rock climb when she could,” he said.

Lauren wasn’t married or in a relationship, David said. She had an older sister and loved her sister’s 5-year-old son “a whole lot,” David said.

David said Lauren was “extremely energetic. She was always doing something.”

David recalled his daughter’s determination and adventurous spirit, remembering in her teenage years when she asked to go to France. David told her she would have to become fluent in French and get straight A’s in school before he would sponsor her trip there.

By the time Lauren was 17, she had won the state French convention and was given a free trip to study at the University of Saint Ann Nova Scotia for the summer of 2011. So David said he let her go to France the next summer.

“It made it very hard to tell her she can’t go away after she won all that,” David recalled fondly.

“She was fluent in multiple languages. Pretty much all self-taught. She just had an aptitude for it,” David said.

“So that’s what I meant by an adventurer, at a very early age she was begging to go places and do things.

“The girl grew up in Alexandria, Louisiana. Taking off and going to New York City by herself and getting a really good job at Bank of America as an analyst — a lot of people in the hometown would call that an adventure.”

Pep Guardiola: city are still far from their best form. We have dropped 10 players
Zidane on Jovic's future: anything can happen. I can't say anything until the window closes
Flick on Bayern's Interest in Kramaric: I know him well, but I haven't heard anything about it
We have three clubs in this group stage of the Champions League. How did campaigns with two end up?
Solskjaer on transfers: No news. Working with what we have, Manchester United have a big squad
Guardiola confirmed that Zinchenko will stay at Manchester City
Bayern won 5 trophies in a year. To repeat the record Barca need to take another
Source https://www.foxnews.com/us/new-york-woman-falls-death-rock-climbing?utm_source=feedburner&utm_medium=feed&utm_campaign=Feed%3A+foxnews%2Fnational+%28Internal+-+US+Latest+-+Text%29

Denial of responsibility! The World News is an automatic aggregator of the all world's media. In each material the author and a hyperlink to the primary source are specified. All trademarks belong to their rightful owners, all materials to their authors. If you are the owner of the content and do not want us to publish your materials, please contact us by email ab[email protected]. The content will be deleted within 24 hours.

Trump claims debate victory over Biden: 'I held Joe accountable for his 47 years of lies'

Shooter opens fire inside Nashville mall, at least one injured

Lawmakers Warn US Failing to Adapt to Growing Chinese Threat

FSU cancels spring break after 1,000-person party over the weekend

Wisconsin school worker jailed for exposing herself to student

By learning to think like a puffin, this conservationist has saved seabirds around the world

Carlos Correa defiant after Astros’ sweep: ‘What are they going to say now’

Fauci Pushes Back at Trump for Misrepresenting His Stance on Masks

Brad Parscale resigns from Trump campaign after hospitalization in Florida

China contained Covid-19. Now, hundreds of millions of people there are about to go on vacation.

Remember East India Company? They usurped India once, an Indian owns it now

The Infodemic: 1 in 1,000 Black Americans Have Died in the Covid-19 Pandemic

‘The 100’ Series Finale: Creator Jason Rothenberg On Tonight’s Surprises & Who Might Return For The Prequel

‘The 100’ Series Finale “The Last War” Recap: Who Lives, Who Dies & Who Transcends

COVID-19 clusters in NYC growing at an alarming rate

Silver: NBA still hoping to open next season in arenas

Rangers owner hoped for Series in new park — with his team

'I Like What I See': FAA Chief Flies 737 Max, But Not Ready To Recertify Plane

Truck swerves off a road through patio, before landing in backyard swimming pool

Fact check: Almost every single one of Trump's debate claims about mail-in voting was wrong

Neanderthal genes may be to blame in some severe coronavirus cases

No, the Recession Isn’t Over—and It’s About to Get Much Worse for Some

Spend a night as the "mayor" of Hell, Michigan

Facebook will forbid ads that undermine the legitimacy of the coming election.

Trump Calls on Extremists to ‘Stand By’

Brad Parscale resigns from Trump campaign after incident at home

How Trump torpedoed the presidential debates

China contained Covid-19. Now, hundreds of millions of people there are about to go on vacation at the same time

Pelosi and Mnuchin have ‘extensive’ talks on COVID relief

Consistency in the time of day you work out may keep off the pounds, study finds

Getting out the vote at the Prince George’s County jail

Thousands sign up as poll workers after LeBron James' efforts

The Proud Boys, Who Trade in Political Violence, Get a Boost From Trump

US Held Back on Belarus Sanctions, Hoping for Joint Move With EU