Weather: Hot and sunny. High in the low 90s, but the heat index could make it seem about 100.

Alternate-side parking: In effect until Saturday (Feast of the Assumption). Read about the amended regulations here. 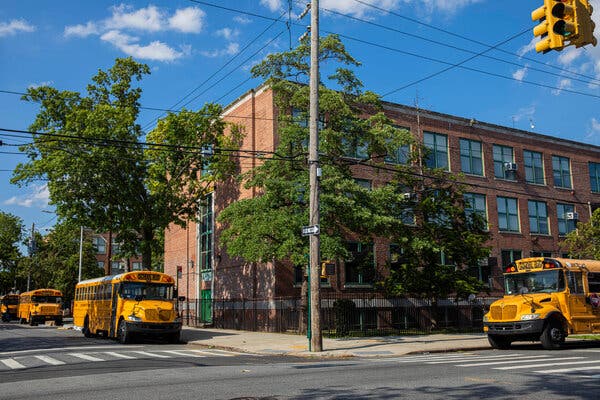 The announcement by Gov. Andrew M. Cuomo on Friday that schools across the state can reopen in the fall was hailed as yet another sign of New York’s progress in containing the coronavirus.

Even so, many hurdles remain.

Just because schools can reopen does not mean they will do so fully. It also does not mean that parents will feel comfortable sending their children into classrooms — or that teachers will be willing to report back to them. The teachers’ union in New York City has already cast doubts about Mayor Bill de Blasio’s ability to safely reopen schools.

“If the teachers don’t come back, then you can’t really open the schools,” Governor Cuomo said. “If the parents don’t send their students, then you’re not really opening the schools.”

[New York is one of the few places in the country that may be able to safely reopen schools, public health experts said.]

Why does it matter?

Remote learning has taken a toll on students. Researchers say not reopening schools may lead to increases in high school dropout rates. Younger children may struggle to learn to read.

If children do not return to schools, racial and socioeconomic achievement gaps are expected to widen because of disparities in access to computers, home internet connections and direct instruction from teachers. Homeless children and students with disabilities will also be disproportionately hurt.

But schools are reopening, right?

Governor Cuomo said schools could reopen, but local politicians and superintendents will now decide whether to do so and how.

The approach will most likely not be uniform: Buffalo’s superintendent has indicated that he may prefer to delay the start of in-person learning until October. In Syracuse, most high school students will probably learn remotely.

In New York City, Mr. de Blasio has called for children to report to school one to three days a week — masks and social distancing will be required — and learn online the rest of the time. But there are concerns about whether there are enough nurses to staff all city school buildings, and some ventilation systems are in urgent need of upgrades.

And all of the school districts’ plans must be approved by the state’s Education and Health Departments in the coming weeks.

Will students and teachers show up?

Even if the plans are approved and schools reopen in some fashion, there is a question of whether parents will send their children to class and whether teachers feel safe enough to come to work.

Some teachers in New York City have threatened to stage a sickout. Their union has indicated it might sue over reopening.

“As Governor Cuomo noted, parents and teachers must be confident that schools are safe before they can reopen,” Michael Mulgrew, president of the United Federation of Teachers, which represents New York City teachers, said in a statement on Friday. “In New York City that is still an open question.”

The latest highlights as the first students return to U.S. schools.

Composting Has Been Scrapped. These New Yorkers Picked Up the Slack.

Who Opposes Defunding the N.Y.P.D.? These Black Lawmakers

The Wallets of Wall Street Are With Joe Biden, if Not the Hearts

Elevator outages are on the rise as the New York City Housing Authority has cut back on maintenance. [The City]

And finally: For three suffragists, a monument well past due

A statue, bound for Central Park, is taking shape that aims to amend not only racial but also gender disparities in public art — a 14-foot-tall bronze monument of Susan B. Anthony, Sojourner Truth and Elizabeth Cady Stanton, three prominent leaders in the fight for women’s right to vote.

Called the Women’s Rights Pioneers Monument, it is to be unveiled Aug. 26 to commemorate the 100th anniversary this month of the constitutional amendment that guaranteed women the right to vote. The sculpture depicts the three women gathered around a table for what seems to be a discussion or a strategy meeting.

Anthony stands in the middle, holding a pamphlet that reads “Votes for Women”; Stanton, seated to her left, holds a pen, presumably taking notes; and Truth appears to be in midsentence.

“I wanted to show women working together,” said Meredith Bergmann, the sculptor chosen from dozens of artists to create the statue. “I kept thinking of women now, working together in some kitchen on a laptop, trying to change the world.”

The statue, to be placed on Literary Walk, will be Central Park’s only monument honoring nonfictional female figures. In its 167-year history, the park has been a leafy home to about two dozen statues of men, mostly white, and to fictional or mythical female characters.

In 2014, a group of volunteers created Monumental Women (initially called the Elizabeth Cady Stanton and Susan B. Anthony Statue Fund Inc.), a nonprofit with a mission of campaigning and raising funds for the suffragist statue in Central Park. The journey from concept to creation was a long and winding one, filled with criticisms and setbacks.

[Read more about the monument here.]

“The fact that nobody, for a long time, even noticed that women were missing in Central Park — what does that say about the invisibility of women?” Pam Elam, the group’s president, said.

It’s Monday — do something for the first time.

I walked up the station stairs, not really paying attention, and was on the sidewalk wishing I had my umbrella when the guy in front of me suddenly stopped to stare at a guy on the other side of the street.

The guy in front of me called a name, and the other guy turned.

What happened next was like something out of a movie: The guy across the street sprinted over and flung himself at the guy in front of me. They clung to each other like magnets before kissing in the pouring rain.

A few people standing nearby who were also watching the scene unfold actually clapped before dispersing.

I saw the same guys again in January. They were holding hands. I noticed that one of them had a sparkly ring on his left hand. The other one was holding a small dog on a leash.

New York Today is published weekdays around 6 a.m. Sign up here to get it by email. You can also find it at nytoday.com.

We’re experimenting with the format of New York Today. What would you like to see more (or less) of? Post a comment or email us: [email protected].

Karasev is scheduled for the young boys-Tirana match in the Europa League
Les Ferdinand: the Decision to take a knee was very powerful, but its impact has decreased. The message is lost
Vidal said goodbye to Barca: Proud to have worn this shirt and played alongside the greats
Sporting renamed the Academy in honor of Ronaldo
Suarez will receive 9 million euros a year at Atletico
Liverpool will not buy anyone else in this transfer window
Semedu will move to Wolverhampton for 35 million euros. Contract - until the summer of 2025
Source https://www.nytimes.com/2020/08/10/nyregion/new-york-schools-reopening-coronavirus.html