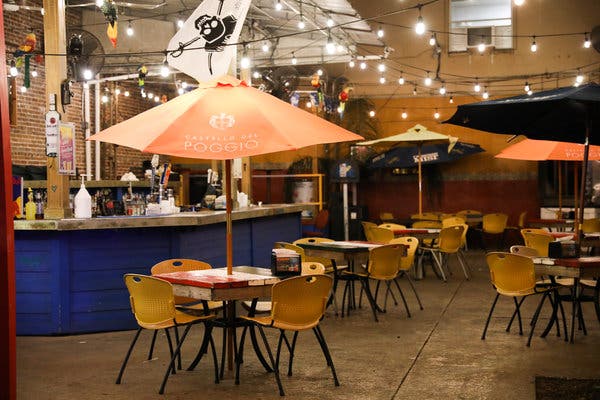 Empty tables last weekend in Tampa, Fla. The June jobs data was collected before coronaviruses cases began spiking in Florida and other states.Credit...Eve Edelheit for The New York Times

New jobs data is expected to show gains for June, but continuing worries.

Thursday will bring a double dose of data about the coronavirus pandemic’s impact on American jobs. But the numbers are arriving just as new clouds seems to be gathering.

The Labor Department’s employment report for June, to be released at 8:30 a.m. Eastern, is expected to show that the economy added three million jobs last month, according to an average of forecasts compiled by the data provider FactSet.

That would be the second straight monthly gain after a catastrophic loss of more than 20 million jobs in April, when the pandemic put much economic activity on ice.

But the survey was compiled in mid-June, before coronavirus cases began to surge in Arizona, Florida and several other states. More timely data that the Labor Department will also release Thursday morning is expected to show that 1.3 million workers filed new claims for state unemployment benefits last week, according to FactSet.

Economists fear that layoffs could accelerate now that California, Texas and other states have begun ordering some businesses to close again.

“The virus drives the economics,” said Betsey Stevenson, a member of the Council of Economic Advisers under former President Barack Obama who is now at the University of Michigan. If cases continue to rise as health officials warn, she said, “we’re not going to have people going back to work. In fact, we’re going to see more people staying home.” — Ben Casselman and Nelson D. Schwartz

Stock markets rose on Thursday as investors looked forward to jobs data from the United States and some positive news on the coronavirus vaccine front.

The U.S. government is expected to announce later Thursday that employers added as many as three million workers to payrolls in June, continuing an upswing that started in May as the American economy started coming out of lockdown. But coronavirus cases are spiking in the United States, with daily record in reported cases on Wednesday. As state governments order restaurants and bars to pull back from reopening plans, data suggest a dampening in the rehiring trend.

Investors were continuing to pay attention to an announcement on Wednesday by Pfizer and Germany’s BioNTech, which found in preliminary test data that a coronavirus vaccine had shown potential and was found to be well tolerated in early human trials. Around the world, 19 vaccines are in human trials.

In Asia, the Shanghai Composite index rose 2.1 percent, South Korea’s Kospi closed 1.4 percent higher, and the Hang Seng in Hong Kong, which was closed on Wednesday for a holiday, gained 2.9 percent.

Alexandria Preston had to dip into money set aside to buy braces for her daughter, who has cystic fibrosis, after her unemployment payments stopped without explanation.Credit...Yoon Byun for The New York Times

When Alexandria Preston had to leave her job as a medical assistant to care for her two children during the pandemic, she didn’t encounter endless delays like so many others trying to get unemployment benefits.

But three weeks later, the payments stopped coming. Then her account was canceled. Her claim had been flagged with the date 9/9/9999 — an indication that it was being reviewed for identity fraud, a vexing problem for a strained unemployment system that has delayed payments to hundreds of thousands of jobless people.

“It was two weeks of not knowing anything and not getting any answers,” said Ms. Preston, who lives in Bangor, Maine.

More than 40 million workers have filed for unemployment benefits since the early days of the coronavirus pandemic — over seven times as many requests as all of 2019. And the volume of claims has been convenient cover for identity thieves filing bogus applications that could cost billions of dollars.

“Fraudsters have been able to hide in the flood of data,” said Pam Dixon, executive director of the World Privacy Forum, a public interest research group. “It is a perfect storm of identity fraud. Anyone who has experienced a major breach in the past three or four years could fall victim to this.” — Tara Siegel Bernard

McDonald’s is pausing its plans to resume dine-in service at thousands of locations across the United States amid a surge in coronavirus infections.

The pause, announced on Wednesday, will last for three weeks. Dining rooms are already open at about 2,200 McDonald’s restaurants, of about 14,000 locations nationwide, and may remain open if local rules allow, the company said in a note to U.S. franchisees and employees.

“This surge shows nobody is exempt from this virus — even places that previously had very few cases,” McDonald’s president, Joe Erlinger, and Mark Salebra, the head of a group representing several thousand franchisees, wrote in the letter. “Moving forward, we will continue to monitor the situation and adjust as needed to protect the safety of our employees and customers.”

The pair said that given the surge in cases, all McDonald’s restaurants should continue to follow safety precautions employed throughout the pandemic, including wellness and temperature checks, the use of masks and gloves, thorough cleaning, enforcing social distancing and contactless service where possible.

Many states, including New Jersey, and cities, such as New York, do not allow indoor dining at restaurants. McDonald’s deferred to its franchisees, who own 95 percent of all locations, on the decision to reopen dine-in service if local rules allow. — Niraj Chokshi

Wall Street enters the second half of 2020 on uncertain footing.

In the first half of the year, Wall Street experienced its biggest quarter-to-quarter swing in more than 80 years.Credit...Brendan Mcdermid/Reuters

Stocks inched higher on Wednesday as investors started a new quarter on a cautious note, balancing tentative signs of economic resilience and a steady climb in coronavirus cases in the United States.

The S&P 500 rose half a percent, while gains in technology stocks led the Nasdaq composite to a record.

Giving stocks a push on Wednesday was news that a Covid-19 vaccine developed by Pfizer and the German biotech firm BioNTech was found to be well tolerated in early-stage human trials. Shares of Pfizer rose abut 3 percent.

But shares of automakers Ford Motor and General Motors fell after they both reported a sharp decline in sales in the second quarter. One standout was the electric-car maker Tesla, which rose 3.7 percent to become the world’s most valuable automaker, surpassing Toyota Motor’s $202 billion valuation.

Markets on Tuesday completed a topsy-turvy first half of 2020. Over the course of six months, stocks on Wall Street experienced their biggest quarter-to-quarter swing in more than 80 years, propelled by the global pandemic and economic shutdowns, followed by extra big helpings of fiscal stimulus by central banks.

In the three months that just ended, the S&P 500 rose 20 percent, the best calendar quarter for the broad market index since 1998. — Matt Phillips and Mohammed Hadi

Catch up: Here’s what else is happening.

Chernyshenko about Euro 2020 in St. Petersburg: Despite the postponement, the organizers will keep the fanzones and trophy tour of the European Cup
Jesus used to eat too much fast food and want to shoot himself because of bad matches. Then I hired a personal trainer
David Silva's Father: The son loves Serie A and says he can play there until he is 40
Alexis Sanchez: I really wanted to stay at Inter. I found a family here
Emil Heskey: Salah should have moved to another club if Liverpool had not taken the Premier League
Roma are discussing with Manchester United the purchase of Smalling
Belenov – the best player of Ufa in the 2019/20 season
Source https://www.nytimes.com/2020/07/02/business/stock-market-today-coronavirus.html

Heffernan: Its "The Bachelor : Campaign Trail." Which of Biden's veep candidates deserves the rose?

How One Chicago Block Is Weathering the Pandemic

An American Pickle, in Spoiler-Filled Detail

Dear Care and Feeding: We Let Our Kids Go Feral During Quarantine. Can We Bring Back Discipline Now?

Think You’re Smarter Than the Executive Producer of Slate Podcasts? Find Out With This Week’s News Quiz.

'More than a Club?' How FC Barcelona 'lost its soul'

Italy prepares to return to school ... with saws

The Greatest Upsets of 2020 So Far

Viewpoint: For the love, keep your masks on!

My Story: A. Scott Bolden