Gail Collins: Bret, did you listen to the president’s weekend address? The one he gave to an audience composed of members at his private golf club? The part where he said Democrats don’t love the country?

For a long time now I think I’ve gone past the ability to be shocked by his run-of-the-mill rants, however dumb and mean, but he does still have a way of getting to me.

Bret Stephens: I made myself watch it. I think the country needs to brush up on the history of Charles I of England and why he didn’t work out (not that anyone should endorse the penalty!).

Gail: If a different person had made the same policy points, I’d have disagreed with him in a respectful way. You and I, after all, have had the argument about cutting the payroll tax for Social Security.

But this allegedly presidential speech was basically a campaign rant about Joe Biden — interspersed with reminders that the virus and everything that followed in its wake is “China’s fault.”

Bret: Everything about it was awful, but it’s the unconstitutional part I dislike the most. If a president can spend taxpayer money through executive orders and Congress doesn’t control the purse strings, we’ve ceased living in a republic. I wonder if Republicans even notice anymore.

Gail: Before I had to listen to him address the nation via his cheering golf partners, I was going to ask you how far the Trump terribleness had driven you. We talk all the time about our mutual desire to clean out the White House. But what about the Senate? Are you rooting for a Republican majority? For Mitch McConnell? For Susan Collins? Tell all.

Bret Stephens: Gail, when it comes to Donald Trump’s Republican Party, I’m a reluctant member of the “destroy-the-village-in-order-to-save-it” school. Obviously I’d much rather see Susan Collins keep her seat than Mitch McConnell keep his post as majority leader, for the same reason that I want moderate Republicans to prevail within the party.

But the most important thing is for the G.O.P. to take such a shellacking in November that they will remember it as the political equivalent of an unsedated colonoscopy.

Bret: And I say that as someone who probably will oppose a lot of what a Biden administration is going to try to accomplish. But if the Republican Party is going to recover its soul, it needs an opportunity for a lot of soul-searching.

Gail: I think I know the Republican Party you’re thinking of. The one that wanted leaner government, an activist foreign policy and tax incentives for business development. The kind of Republican Party that worked with the Democrats on stabilizing Social Security back in the day.

Bret: The kind of Republican Party that didn’t think the term “family values” meant an enrichment scheme for Trump’s children and in-laws; that believed in the power of immigrants to refresh and reinvent the nation; that understood that Vladimir Putin and Kim Jong-un were the enemy, not Nancy Pelosi and Chuck Schumer; that respected federalism even if it meant deferring to the wishes of Democratic governors and mayors; and that worshiped at the political altars of Abraham Lincoln and Teddy Roosevelt, as opposed to P.T. Barnum and Archie Bunker.

Gail: Sorry to say I think that Republican Party has been eaten up, not just by Trump but by social media, which is really easily bored by moderation and compromise.

Gail: Do you really think a post-Trump party could excite those folks with some kind of new Mitt-Romneyesque incarnation?

Bret: Well, that’s assuming there ever is a post-Trump party, at least in our lifetimes. You know, it’s way too soon to rule out another heartbreaking election night, followed by the Ivanka administration-in-waiting.

Gail: Pardon me while I crouch in a fetal position.

Bret: But about Mitt, he isn’t the one: He represents a moral instinct and a technocratic mind-set, not a compelling political philosophy. Our colleague David Brooks points to Marco Rubio, Tom Cotton, Ben Sasse and Josh Hawley as the four G.O.P. Senators who have distinct ideas of where they want to take the party ideologically. But with the exception of Sasse, I find their ideas about as appetizing as kibble: They’re all for more government (and more moralistic government), not less.

Gail: So weird that under Trump, the Republican Party became captive of the anti-abortion social right.

Bret: Another complaint I have about Trump: The only good thing that might have come from putting a libertine at the head of the G.O.P. was to get the party to unconstipate itself. And he couldn’t even get that right.

But let’s switch the subject to Democrats, Gail. How do you feel about Susan Rice as a potential vice-presidential candidate?

Gail: She has experience in government, especially foreign affairs. If she doesn’t have much background in campaigning, she has plenty with the other very public parts of life as lived in the Washington bubble.

But the idea of hearing Republicans howl about Benghazi again makes me so very, very weary. You think that’s an old story that won’t catch on this time around? 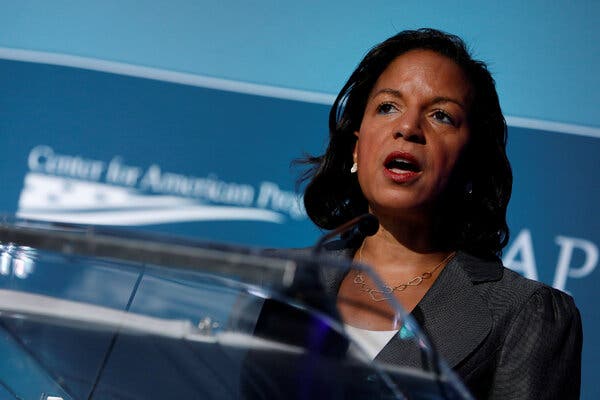 Susan Rice at the Center for American Progress Ideas Conference in Washington, D.C., in 2017.Credit...Aaron Bernstein/Reuters

Bret: There’s a lot of Susan Rice baggage. Much of it goes back long before Benghazi, to the early Clinton administration, when her reaction to the Rwandan genocide in the spring of 1994 was reportedly to ask how U.S. intervention in response might play in the midterms. She also fumbled peacemaking efforts in both East and West Africa and coddled a succession of strongmen with appalling human-rights records. The former New York Times reporter Howard French claims (though Rice denies it) that she effectively greenlighted the Rwandan invasion of Zaire (as Congo was then called), which turned into one of the worst calamities in African history.

Gail: You know that I defer to you on foreign affairs. Sooner or later we’ll have an argument about state legislatures and I will be so on top of things.

Bret: Well, foreign policy was my beat for about 20 years, so I’m obsessed. Another worry about Rice is that she doesn’t really have any experience of electoral politics. Working at the U.N. or the National Security Council is just not the sort of background you need to connect with voters. I don’t even know what her home state is, much less what she thinks about any issue that isn’t connected to foreign policy.

Gail: We definitely need a vice president with a home state.

Bret: My favorites still remain Val Demings or Tammy Duckworth. But if I have to choose between Susan Rice and Kamala Harris, I’d choose Val Demings.

Gail: Whenever we get on this subject a wave of sadness overtakes me. Still yearning for Elizabeth Warren. But really, anybody who’s part of a change of administration would be OK by me in the long run. One thing I have to give Trump credit for is a general lowering of expectations.

Bret: Gail, rest assured that before the year is out he’ll lower them some more.

Zinchenko will miss at least three weeks due to injury
Bayern want to buy Kramaric. He scored a double against Munich last week
Benfica coach on Dias' departure: We are only financially weaker than the city. He is leaving a bigger club
Milan and Ajax want to sign Atalanta defender Gemiti
Manchester United wanted to rent Chiesa. Fiorentina denied
Kuizans will sign a 4-year contract with Leeds. Bayern will be able to return the midfielder within two years
I want to play football in the Amateur League. How much does it cost?
Source https://www.nytimes.com/2020/08/10/opinion/trump-coronavirus-vp-rice.html

Watch out! If you have these applications, the 'Joker' malware is stealing your data

Hospital Employee Is Fired After Speaking to The New York Times

As Covid-19 rates tick up in much of country, some communities loosen restrictions

Mnuchin and Pelosi still negotiating stimulus as Democrats prepare to vote on $2.2 trillion bill if there's no deal

Harris slams Trump after debate: "A dog whistle through a bullhorn"

Extended! Get $20 off at Amazon when using your Capital One credit card

You can now cast your vote for Fat Bear Week

How 'standuperos' sparked a 'cultural revolution' in Mexico's comedy scene

‘The More I Watched, the More Unsettled I Felt’

Trump is urged to intervene in trial of US-Saudi national

Tuesday’s Debate Made Clear the Gravest Threat to the Election: The President Himself

The Latest: Biden says he would represent all Americans

Biden says Antifa is just an idea, but here's what we know about it

How WNBA star Liz Cambage is ‘celebrating’ her sexuality in Playboy

Opinion | No, They Shouldn’t Cancel the Debates

How to Disagree the Right Way

Who are the Proud Boys? What to know about the group and its leaders

Why you pay taxes, and rich Americans -- like Donald Trump -- don't always have to

'Can the little guy do this? No': Why regular Americans pay taxes but the rich, like Trump, don't always have to

Ocasio-Cortez and Warren Pull Out of New Yorker Festival

Grand Prix Final in figure skating postponed due to pandemic

Montana mailed ballots must be received by Nov. 3 to count

Trump had to 'fight' during first presidential debate because of Biden's 'lies': Lara Trump

NFLPA asking teams to change all fields to natural grass

Portland asks US to rescind deputization of city police

Bekele wary of new course in London showdown with Kipchoge

‘It belongs to us!”: Tense French trial over colonial art