Acting Undersecretary of the Navy Greg Slavonic put out a memo Wednesday night obtained by Fox News with the subject line: "Clarification of Guidance Related to Attendance at Religious Services." The acting assistant secretary of defense issued guidance on Tuesday regarding religious liberty.

In the Slavonic message, commanders were advised that the guidance should not "be construed to restrict attendance at places of worship where attendees are able to appropriately apply COVID-19 transmission mitigation measures, specifically social distancing and use of face covering."

"I am directing you to ensure that all Service guidance reflects the reference message and to inform Commanders to incorporate this clarification allowing attendance at religious services where COVID-19 transmission mitigation measures may be appropriately applied." 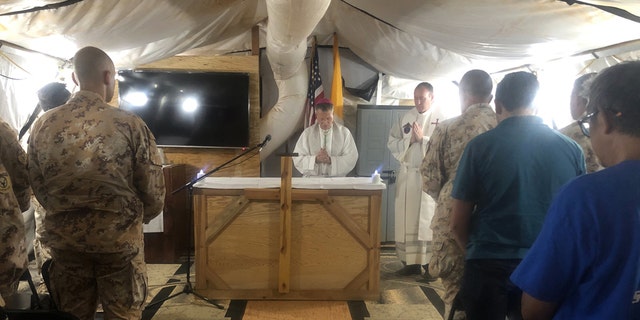 On June 29, Major Daniel Schultz, USAF, currently assigned to a Navy command, requested a religious accommodation to attend the church where he leads worship. He said a newly issued order banned attending indoor services, but permitted house parties and protests.

Two days later, the U.S. Fleet Forces told Fox News it updated the order for in-residence gatherings, which had been in place since March, limiting it to 10 people and removing the word "social."

OUTRAGE AFTER CALIFORNIA BANS SINGING IN CHURCHES AMID CORONAVIRUS PANDEMIC

Mike Berry, the First Liberty Institute general counsel who sent a letter on behalf of Shultz last week, celebrated the clarification as a "major victory" for the Constitution and religious freedom within the military.

“We are grateful to Acting Undersecretary Slavonic and Navy leadership for righting this ship, and to Commander-in-Chief Trump for making religious liberty a priority,” Berry told Fox News. “This memo means tens of thousands of our brave service members will be able to safely and freely exercise their religious beliefs.”

Prior to the memo, Reps. Doug Collins, R-Ga., and Doug Lamborn, R-Colo., sent a letter Thursday to Secretary of Defense Mark Esper blasting the Department of Defense for failing to protect service members' religious liberty.

“Given the years-long record of the DoD’s actions in contradiction with federal law protecting religious liberty, it is clear to us that the DoD has either willfully ignored or is unaware of its obligations to protect the religious freedom of its servicemembers,” they wrote.