NASA astronaut Kate Rubins said on Friday that she plans to cast her next vote from space – more than 200 miles above Earth. Rubins is just outside Moscow in Star City, Russia, preparing with two cosmonauts for a mid-October launch and a six-month stay at the International Space Station.

"I think it's really important for everybody to vote," Rubins told The Associated Press. "If we can do it from space, then I believe folks can do it from the ground, too." 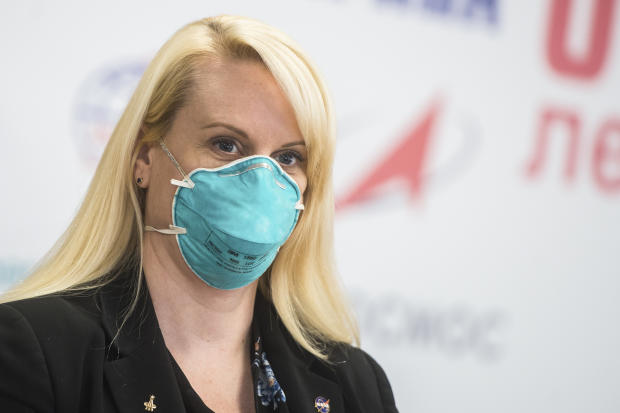 This photo provided by NASA shows Expedition 64 prime crew member NASA astronaut Kate Rubins during a news conference prior to her launch from the Baikonur Cosmodrome at the Gagarin Cosmonaut Training Center (GCTC) in Star City, Russia. Andrey Shelepin / AP

Most U.S. astronauts live in Houston. Texas law allows them to vote from space using a secure electronic ballot. Mission Control forwards the ballot to the space station and relays the completed ballot back to the county clerk.

Astronaut David Wolf was the first American to vote from space in 1997, the same year the law was passed.

"It's critical to participate in our democracy," Rubins said. "We consider it an honor to be able to vote from space."

Rubins, who has completed two successful spacewalks, and Shane Kimbrough both cast their votes from the International Space Station in 2016.

At the time, Kimbrough told reporters before he left Earth that he is "pretty much apolitical," but that he was excited to be able to say "I voted from space."

Rubins, the first person to sequence DNA in space, plans to work on a cardiovascular experiment and conduct research using the space station's Cold Atom Lab.

While she's there, she'll celebrate the 20th anniversary of continuous human presence on the space station, and welcome the crew of the second SpaceX commercial crew mission, expected to arrive in late October.

Cydney Adams contributed to this report.

Klopp Pro 2:1 with Sheffield: Wins 2:0 or 3:0 come when you fight fiercely in games like this
Messi repeated his worst streak - 6 games without goals to Real Madrid
Schalke are 21 consecutive games unbeaten in the Bundesliga and are in penultimate place
Ronaldo - Khabib: Congratulations, bro. Your father is proud of you 🙏
Suarez shares 1st place in The La Liga goalscoring race with Fati and Paco, scoring 5 (4+1) points in 5 games
Real Madrid beat Barcelona by wins in full-time official matches-97 vs 96
Lampard on the episode with Maguire and Aspilicueta: a Clean penalty in favor of Chelsea
Source https://www.cbsnews.com/news/nasa-astronaut-kate-rubins-to-vote-from-space/

Unsure How to Select Artwork? An Expert Weighs in With Some Tips