With the Tennessee Titans roiled by a coronavirus outbreak that has infected multiple players and team personnel, the N.F.L. said it would reschedule their game against the Pittsburgh Steelers to later in the season. It is the first N.F.L. game to be pushed back because of Covid-19, the disease caused by the virus and the news comes after two more members of the Titans — a player and a team employee — tested positive on Thursday, bringing the team’s total infections to 11.

The league had considered pushing the game back one or two days from its scheduled start on Sunday, but will now slot the game for a date later in the season, a decision the N.F.L. said would come “shortly.” In a statement released Thursday, the league said “the decision to postpone the game was made to ensure the health and safety of players, coaches and game day personnel. The Titans facility will remain closed and the team will continue to have no in-person activities until further notice.”

The Titans halted in-person activities on Tuesday after learning that eight members of the organization — three players and five employees — had tested positive. In separate testing, a fourth player, outside linebacker Kamalei Correa, was found to have contracted the virus. The outside linebackers coach, Shane Bowen, did not accompany the team to Minnesota for Sunday’s game against the Vikings in accordance with Covid-19 protocol, which forbids anyone who tests positive or has been exposed to someone who has from traveling.

Thursday’s results added a player and another member of Titans personnel to their number and changed the optimism that the game could still be held this week.

The Minnesota Vikings, who hosted Tennessee on Sunday, have not received any positive results as of Wednesday, the team said, and after a two-day hiatus are hopeful of re-entering their facility Thursday. Their game Sunday at Houston has not been changed.

Commissioner Roger Goodell will decide when the game is played, in consultation with an independent eight-person advisory committee created to prevent members of the league’s competition committee — of which Steelers Coach Mike Tomlin is a member — from making decisions that benefit their teams.

“We’ll assess day by day,” Brian McCarthy, a league spokesman, said Wednesday. “We might be in a position tomorrow where it’s more widespread and have to say, ‘Let’s go to Tuesday.’ And we might have to go to a scenario where we can’t play Monday or Tuesday. We’re not going to put the health of the players in jeopardy. Everything is subject to change and we’re being flexible and adaptable.” 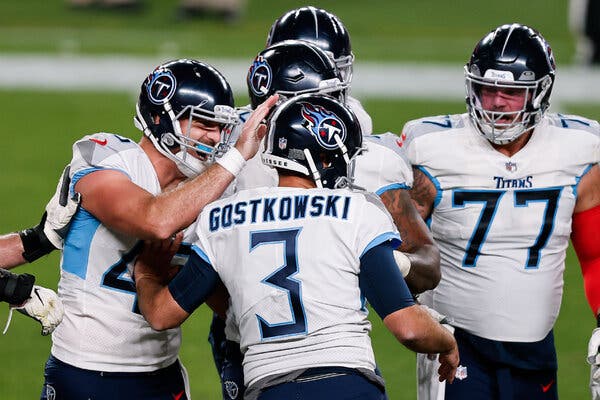 The results of daily testing forced the league to further push back the game, despite the updates made to league rules before the season began, which were meant to ensure play could continue if an outbreak was isolated to a handful of players.

The N.F.L. and its players’ union agreed to increase the size of rosters this season to give teams greater flexibility. Teams now can carry 55 players during the week, up from 53, by promoting from the practice squad, and 48 on game days (up from 46), as long as eight are offensive linemen. Otherwise, teams can have up to 47 players.

The N.F.L. also established a separate reserve list for players who either test positive for the virus or come into contact with someone who has. Practice squads, the auxiliary group normally populated by first- or second-year players, now have a maximum of 16 players, with six spots reserved for veterans. The league relaxed rules for the injured reserve, allowing players to resume practicing after three weeks and teams to bring back to the active roster as many players as necessary. In previous seasons, teams could activate only two players from injured reserve, and players would have had to miss at least six weeks of practice and eight weeks of games.

On Wednesday, it seemed likely that Tennessee would be able to put replacement players on the field within five or six days, since the players on its reserve/Covid list weren’t from one particular position group. They included Correa; long snapper Beau Brinkley, who played 10 snaps against Minnesota; defensive tackle DaQuan Jones, who played 51; and the practice-squad tight end Tommy Hudson.

“Since receiving the protocols in August, we’ve followed those by the letter,” Titans Coach Mike Vrabel told reporters Wednesday. “This is a very unfortunate situation, but one that we’re confident that we will be able to handle safely with the football team and the players’ best interest in mind.”

“We realize there’s going to be some uneasiness and uncertainty in 2020. We’re not running away from it. We embrace it,” Steelers Coach Mike Tomlin said.Credit...Michael Noble Jr. for The New York Times

The Steelers (3-0) have had no positive tests and will now prepare for their Week 5 game, against the Philadelphia Eagles at home on Oct. 11.

“We live one week at a time, man,” said Pittsburgh Coach Mike Tomlin, adding, “We realize there’s going to be some uneasiness and uncertainty in 2020. We’re not running away from it. We embrace it.”

This outbreak represents the first significant threat to a season that, perhaps improbably, has unfolded without any major setbacks since players reported to training camps in late July. Unlike the other major professional sports leagues, whose seasons either stopped abruptly in March or were delayed indefinitely, the N.F.L. did not have to make any immediate decisions regarding its calendar. Even as transmission rates surged, the N.F.L., again and again, asserted that the season would begin as scheduled, on Sept. 10, a date that held. And the league was able to hold regular off-season activities — free agency, the draft, league meetings — on time, though virtually.

Low positive rates throughout training camp extended into the season, as teams’ adherence to protocols resulted in only five positive cases — none from players — from more than 36,600 tests given to 7,845 players and employees between Sept. 13 and 19. Through Week 3, only one player, Falcons cornerback A.J. Terrell, had missed a game, last Sunday against Chicago, for being on the reserve/Covid-19 list.

Klopp Pro 2:1 with Sheffield: Wins 2:0 or 3:0 come when you fight fiercely in games like this
Messi repeated his worst streak - 6 games without goals to Real Madrid
Schalke are 21 consecutive games unbeaten in the Bundesliga and are in penultimate place
Ronaldo - Khabib: Congratulations, bro. Your father is proud of you 🙏
Suarez shares 1st place in The La Liga goalscoring race with Fati and Paco, scoring 5 (4+1) points in 5 games
Real Madrid beat Barcelona by wins in full-time official matches-97 vs 96
Lampard on the episode with Maguire and Aspilicueta: a Clean penalty in favor of Chelsea
Source https://www.nytimes.com/2020/09/30/sports/football/nfl-postpones-titans-steelers-covid-19.html