Michaela Onyenwere scored a career-high 30 points, Japreece Dean added 22 and U.C.L.A. squeezed past No. 3 seed Maryland, 85-80, Monday night to earn its fourth consecutive berth in the Round of 16 of the women’s N.C.A.A. tournament.

Dean, the smallest player on the court, sank two free throws with 25 seconds remaining to make it 83-79, and the Bruins held on to beat the Terrapins on their own court.

Sixth-seeded U.C.L.A. (22-12) will next face second-seeded Connecticut (33-2) on Friday in the semifinal round of the Albany region.

Ranked first in the Pac-12 and third in the nation in offensive rebounding, the Bruins repeatedly gathered their own missed shots and turned them into baskets. U.C.L.A. collected 27 offensive rebounds and finished with 27 second-chance points.

Maryland led by 76-74 before U.C.L.A.’s Kennedy Burke grabbed an offensive rebound and scored on a put-back. Teammate Lindsey Corsaro followed with a three-point play with 3:34 remaining.

Brianna Fraser answered with a layup for the Terrapins to make it 79-78 with 3:16 remaining, and neither team scored again until Burke hit a jumper with 1:03 to go.

Kaila Charles led Maryland (29-5) with 23 points. The Big Ten regular season champions went 1 for 13 from beyond the arc and 15 for 25 from the free throw line.

Madison Guebert scored 18 of her 20 points on 3-pointers, including two critical 3s in the fourth quarter, to lead No. 6 South Dakota State to a 75-64 win over third-seeded Syracuse on Monday night.

The victory sends the Jackrabbits (28-6) to the Round of 16 for the first time in program history. They will face No. 2 Oregon on Friday in the regional semifinals in Portland, Ore.

Guebert had 14 of her points in the second half. Myah Selland added 17 for South Dakota State, Macy Miller had 11, and Paiton Burckhard 10. 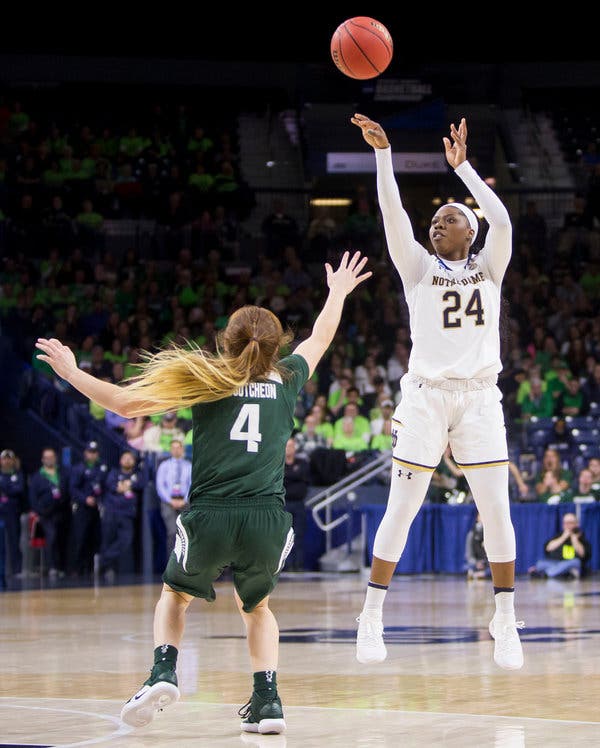 Arike Ogunbowale scored 23 points and two teammates had double-doubles as top-seeded Notre Dame ran away from No. 9 Michigan State in the first half of a 91-63 victory Monday night in the N.C.A.A. Chicago regional.

Jackie Young gave coach Muffet McGraw and the Purcell Pavilion crowd a scare when she fell hard to the floor just seconds before the end of the third quarter. She was O.K. and finished with 21 points, 11 rebounds and 7 assists for the Fighting Irish, who are in the Round of 16 for the 10th straight season. They will play No. 4 Texas A&M Saturday at Wintrust Arena in Chicago.

Brianna Turner had 14 points and 11 rebounds in becoming Notre Dame’s all-time leading rebounder, passing All-American Ruth Riley from the 2001 N.C.A.A. champions. Jessica Shepard had 19 points and nine rebounds as Notre Dame won its 11th straight despite shooting 47.9 percent (35 of 73). The Irish had a 49-37 edge in rebounds.

Coach Suzy Merchant’s Spartans (21-12) had few answers for Notre Dame’s dominant starters. For the second straight game, Sidney Cooks came off the bench to score a team-high 17 points on 8-of-12 shooting and Jenna Allen closed her Michigan State career with 12 points. Kayla Belles scored 10. The Spartans shot just 37.3 percent (25 of 67) for the game.

Young showed off her versatility in the first half that Notre Dame dominated by 52-26. Indiana’s all-time prep scorer at Princeton High School, 87 miles down the southern Indiana roads from Allen’s Bedford North Lawrence High, scored 13 points, pulled down eight rebounds, dished out five assists and had two blocks while also holding Taryn McCutcheon to zero points when McGraw elected to play some man-to-man rather than Notre Dame’s normal 2-3 zone.

Kiara Leslie had 26 points and 10 rebounds, and North Carolina State pulled away to beat Kentucky, 72-57, on Monday night.

Freshman Elissa Cunane added 13 points and 15 rebounds, DD Rogers had 11 points and 11 boards, and the third-seeded Wolfpack (28-5) dominated the glass while earning their second straight trip to the Round of 16.

N.C. State — which had a 50-31 rebounding advantage — will play second-seeded Iowa (28-6) on Saturday in the semifinals of the Greensboro region.

Freshman Rhyne Howard scored 21 points and Maci Morris had 18 for the sixth-seeded Wildcats (25-8). They were 3 of 16 in the fourth quarter — all three field goals belonged to Morris — while the Wolfpack pulled away.

N.C. State pushed its lead into double figures by scoring the first seven points of the fourth and clamped down on Kentucky the rest of the way, with Kai Crutchfield’s 3-pointer putting the Wolfpack up by 14 with 2:30 to play.

Crutchfield finished with 11 points for the Wolfpack, who reached the 28-win mark for the first time since 1980 and improved to 16-2 in N.C.A.A. tournament games in Raleigh.

Atalanta bought Pashalic from Chelsea for 15 million euros (Nikolo Skira)
Russia, Germany and Portugal qualify for the Champions League (Bild)
Barcelona will not buy Neymar for 175 million euros and will focus on the transfer of Lautaro
🔙 Spanish football will return for the second half of Rayo Albacete. The first one was played six months ago, when the match was stopped because of zozuli's insults
Ulreich doesn't want to be Bayern's third goalie. He can move to Schalke
Lionel Scaloni: Lautaro will get better playing with Messi. He has a great future, but we need to give everything we can
The reading player criticized Phil Neville: I was hurt by the words that the England team was used as a springboard
Source https://www.nytimes.com/2019/03/25/sports/ncaa-womens-tournament-ucla-south-dakota-state.html?partner=rss&emc=rss

The Latest: Floyd tested positive for COVID-19 in April

US Presses China for ‘Full Public Accounting’ of 1989 Tiananmen Crackdown

Reimagining the world after Covid

Julianne Hough is a 'deeply different person' now than when she married ex Brooks Laich in 2017: report

Inmate at Brooklyn federal lockup dies after guards pepper-spray him

Demonstrations Over George Floyd's Death And Police Brutality Carry On

Trump Uses the Military to Prove His Manhood

Rapper Trina criticized after protest, looting comments: ‘Keep … these animals off the street’

Migrants stuck in Panama demand to continue journey to U.S.

Bill Bennett fires back at Mattis over criticism of Trump, says 'we need to get a hold of' urban riots

Could Police Actually Shut Down a City’s Cell Service?

This mountainous region produces some of the best cheese in Asia

Pastors call on Joliet mayor to resign following viral video of protest skirmish, cite previous disciplinary action from his work as a cop years ago

Congress approves sweeping changes to PPP. Here are the details

Bureau Of Prisons Locks Down Corrections Facilities Amid Social Unrest

Malcolm Jenkins responds to Drew Brees: 'You're a part of the problem'