(VALLETTA, Malta) — More than 400 migrants are living aboard pleasure cruise vessels bobbing in the sea off Malta, many of them for weeks now. But for them, it’s no pleasure, only uncertainty over their fate and they aren’t cruising anywhere.

Rescued from human traffickers’ unseaworthy boats in several operations in the central Mediterranean since late April, the migrants, along with the Maltese government, are waiting for European Union countries to offer to take them in. So far, only France has stepped forward, pledging to accept some of the asylum-seekers.

France is one of a handful of EU countries which agreed last year to share the burden of caring for migrants rescued at sea by Malta and Italy.

But that arrangement often yielded pledges that weren’t fully met, and that was before COVID-19 containment measures in Europe made movement of peoples across borders even more complicated.

On Wednesday, SOS Mediterranee, a European humanitarian group which has operated rescue boats in the Mediterranean Sea, lamented that the migrants being held on the chartered tourist boats were being used as political pawns.

Read more: Coronavirus Is Closing Borders in Europe and Beyond. What Does That Mean for Refugees?

“Instead of disembarking them in a safe place, as international law requires, the persons rescued at sea get used for political negotiations with member states of the European Union, which, despite the urgency of the situation, haven’t proposed a coordinated solution for their transfer,” the group said in a statement.

On Tuesday, some of the migrants could be seen walking on deck. Their laundry hung from improvised clothes lines. Maltese armed forces, arrayed in boats, keep watch on the four vessels usually used for pleasure excursions to ferry tourists to the tiny Mediterranean island nation’s attractions, like the blue grotto and beaches accessible by sea. The small flotilla of tourist boats is about 23 kilometers (14 miles) offshore. 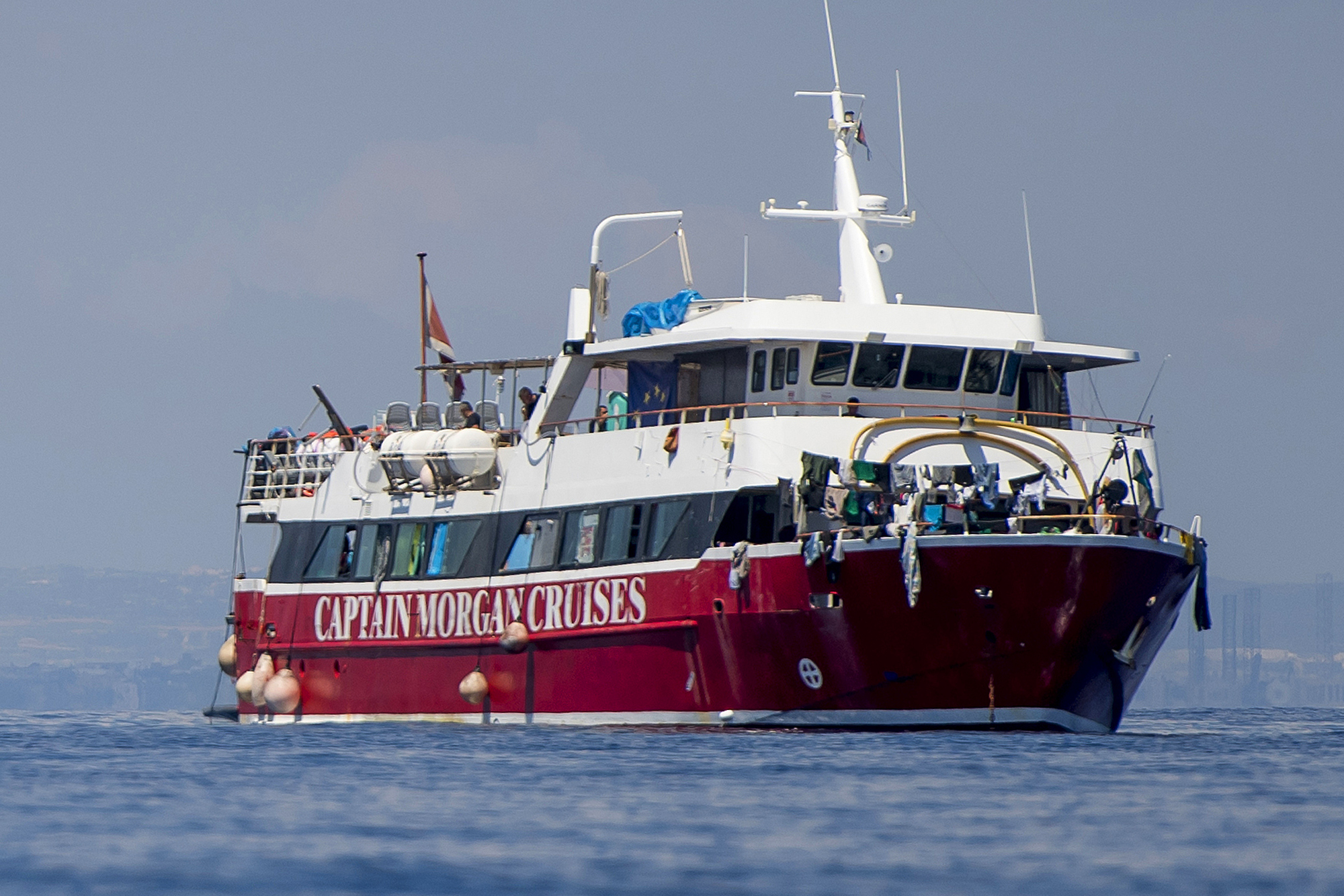 Migrants dry their clothes aboard a tourist boats some 20 kilometers from Malta on June 2, 2020.

With Malta under COVID-19 containment measures, its ports have been closed, and the four tourist cruise boats can’t operate for business now. But this week, Malta announced that on July 1 it re-opens to tourism. The government is paying several thousand euros a day to charter the boats from a Maltese company.

At a news conference Monday to outline the July 1 travel rules, Prime Minister Robert Abela was asked about the migrants’ fate. Abela described the situation as unfortunate. He noted that while Malta reopens its airport on July 1, its ports stay closed for now as part of coronavirus containment rules.

Malta has registered 620 known cases of COVID-19. About 50 of those infections were suffered by migrants in one of its reception centers on land. With that one under quarantine and others full in late April, Malta decided to charter private vessels, in this case from a tourist pleasure craft company, to house the migrants.

The numbers of migrants kept at sea swelled last week to past 400, with the latest sea rescue on May 27.

Abela said this week he hoped a European solution will be found for these migrants as well in case of future rescues of migrants from boats launched by Libya-based traffickers. The migrants flee conflict and poverty, with many of them coming from sub-Saharan Africa. Migrants who embark on the dangerous journeys because of economic reasons usually see their asylum bids denied.

Two weeks ago, the U.N. Refugee Agency and the International Organization for Migration said it was “unacceptable to leave people at sea longer than necessary, especially under difficult and unsuitable conditions.” The organizations noted that 21 people, mostly families and children, had been evacuated and brought ashore to Malta earlier in May.

Early in the standoff at sea, Maltese Foreign Minister Evarist Bartolo said that since 2005, other EU countries had taken what he called a “miserly 8% of all those who were saved and brought to Malta.”

Baros will end his career at the end of the season
Pogba and Brunu were injured when they collided in training. The Bournemouth game is in question (Daily Mail)
Ex-President of Barca Gaspar: Messi has a few more years to be the best player in the world
Morata scored a double for Atletico for the first time since March last year
Rummenigge on Tiago: there have been no Contacts with Liverpool, but he wants something new
Rivaldo on Messi in Juve: The world will boom. The Duo of Lionel and Ronaldo will go down in history
Atletico Interrupts the penalty for the second match in a row. Morata converted an 11-yard shot from the 2nd attempt
Source https://time.com/5847289/rescued-migrants-maltese-cruise-stranded/?utm_source=feedburner&utm_medium=feed&utm_campaign=Feed%3A+time%2Ftopstories+%28TIME%3A+Top+Stories%29

Michael Dukakis warns Biden to ignore the polls: 'No guarantee of success'

Saroj Khan, Choreographer Who Made Bollywood Sparkle, Dies at 71

‘They have lost control': Why Minneapolis Burned.

Stream It Or Skip It: ‘Desperados’ on Netflix, a Hapless Rom-Com with an All-Too-Appropriate Title

Rand Paul's exchange with Fauci was exactly what America needed