As a pastry chef who spends her workdays in a surgical-style mask next to hot ovens, Leigh Omilinsky is no stranger to the face mask “sweat factor.”

So she has little patience for those griping about muggy mouths now that Chicago’s weather has turned steamy.

“This has to be more comfortable than a ventilator,” said Omilinsky, 35, of Chicago’s Logan Square neighborhood.

When health officials began recommending people wear masks in public places to slow the spread of COVID-19, they turned to whatever was available, be it a hand-sewn fabric mask, cut up T-shirt or winter balaclava. Now they’re often required, in places where social distancing is a challenge. As Illinoisans cautiously return to more activities put on hold during the pandemic, some are looking for masks that are tolerable for more than a quick grocery run.

Big brands like Under Armour, New Balance and Uniqlo have announced designs using breathable fabrics, and Chicago mask-makers are experimenting with new styles as well.

There’s no magic bullet. Things that make a mask effective at containing droplets that can spread the virus causing COVID-19, like multiple layers of tightly woven fabrics, also tend to make them steamy on hot, humid days. Still, a mask that’s comfortable enough to keep on your face is more effective than one that spends most of its time dangling under your chin, experts said.

“That’s the Catch-22,” said Alan Spaeth, co-founder of Chicago-based PrideMasks. “You make it lighter and more breathable, and it’s not doing its job, which is keeping your particulates close to your face.” 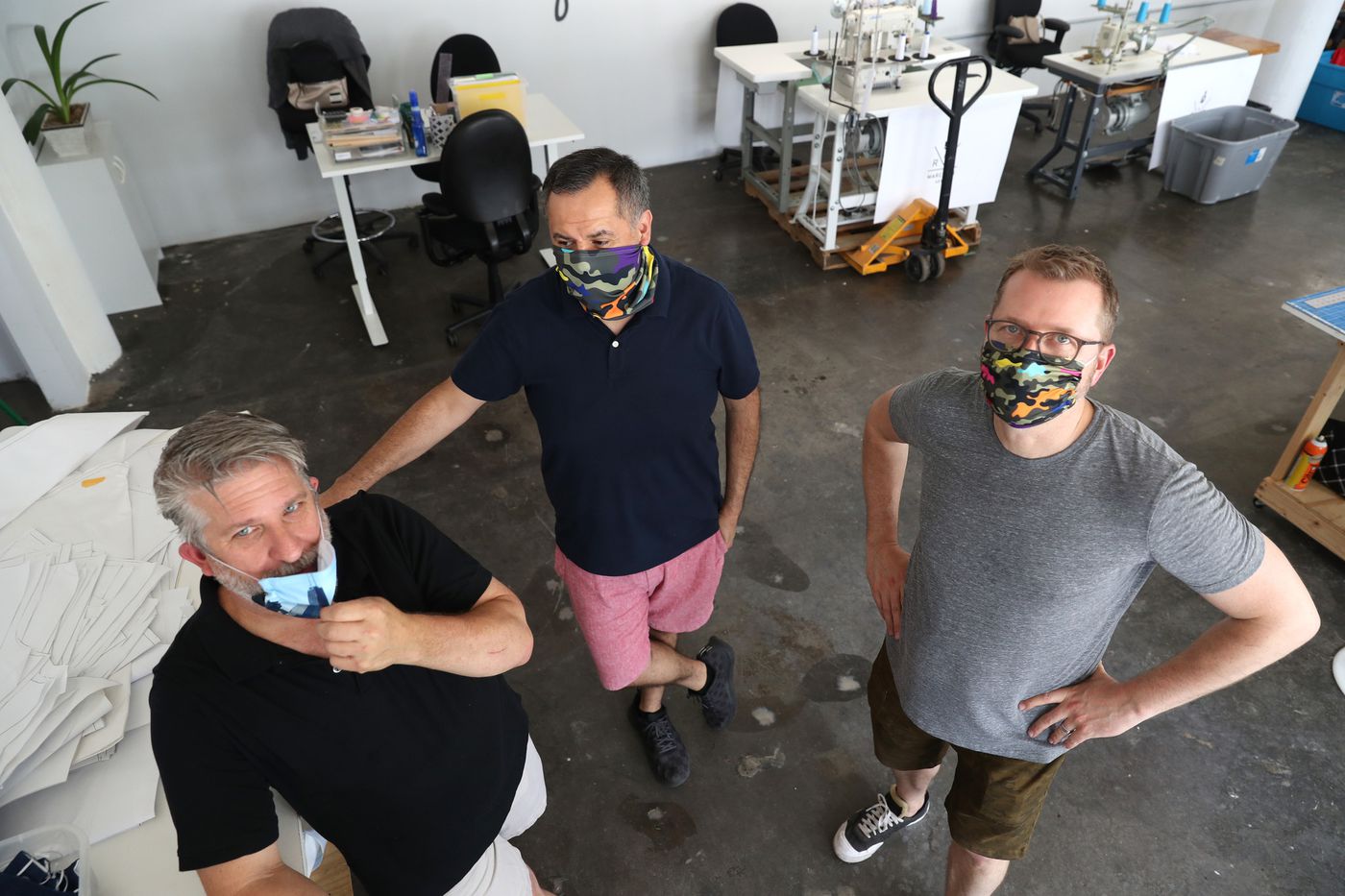 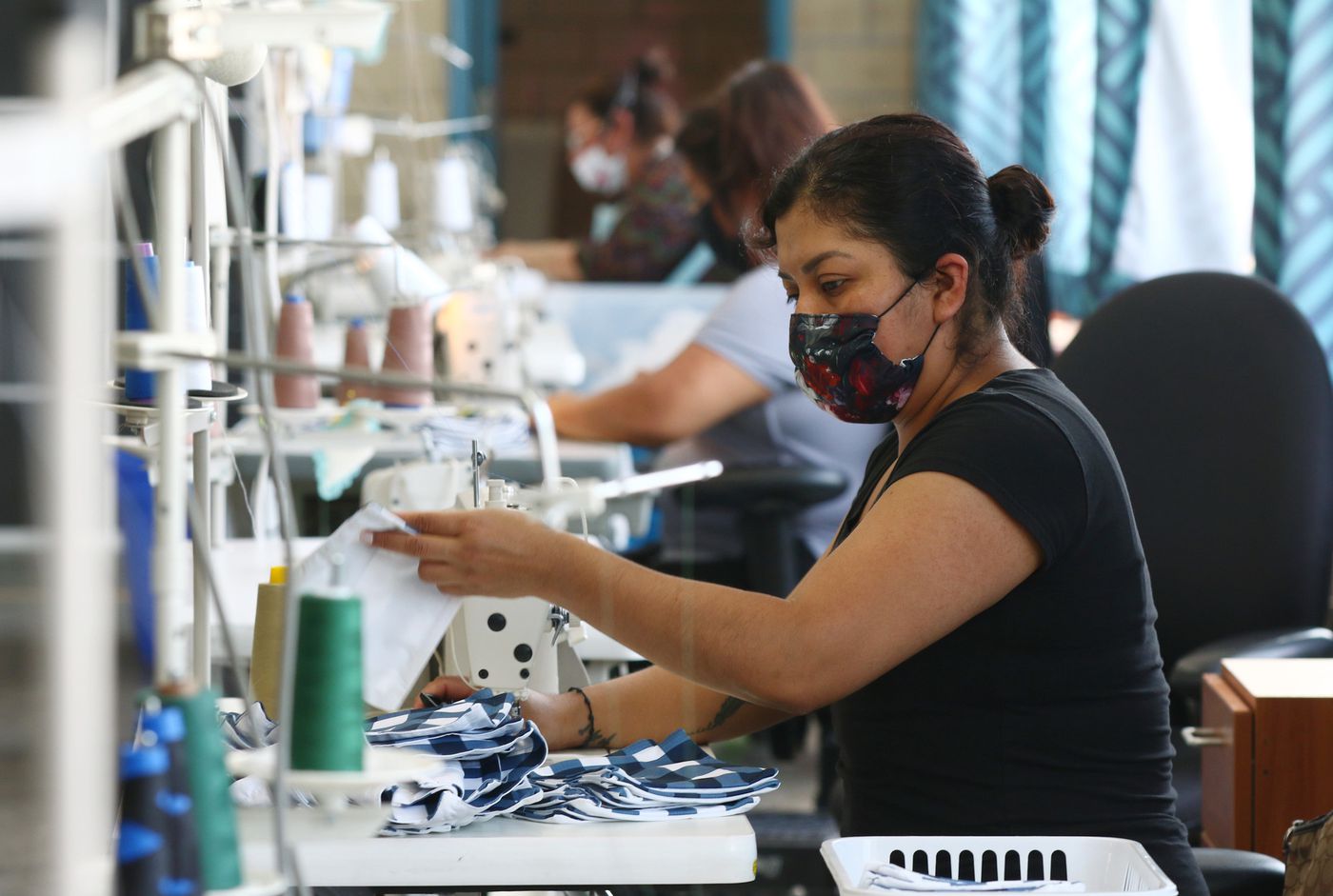 Kourtney Vahle, 45, of Logan Square, wears a thick mask with a filter at the grocery store but chose a lighter, more comfortable version on a recent walk with her daughter in Lincoln Park. She’s been trying out options from different brands, trying to find ones that work for her kids before they go back to school classrooms.

Federal and local health officials recommend wearing masks in public places, especially when social distancing can be difficult. Many retailers require them, and some apparel chains have even started selling them.

The Illinois Department of Public Health advises using a cloth face covering but doesn’t specify the type of material. It recommends the mask be breathable while covering the wearer’s nose and mouth, fit snugly and comfortably against the side of the wearer’s face and have multiple layers of fabric.

Mr. Pink’s, a mask-making offshoot of Chicago-based Bangtel, which rents properties in Chicago and New York for vacations and bachelorette parties, originally designed a mask with three layers of fabric and a pocket for a filter. It’s still the most popular, but Mr. Pink’s is constantly experimenting, said owner and founder Liz Klafeta.

There’s also a two-layer option for people worried about overheating. Another has a stiff outer layer that stands away from the wearer’s face, keeping fabric off their mouth. Customers can choose between masks that loop around their ears or tie behind the head. Some styles also offer a choice between an all-cotton mask or one with an inner flannel layer that’s softer against the skin.

Soon Mr. Pink’s will carry a see-through mask with a clear vinyl window along with a line of bachelorette and wedding-themed masks.

“We’ll do it for as long as people need it or are requesting them,” Klafeta said. “It feels good to be doing something a little different that can bring a smile to people’s faces.”

Finding masks breathable enough to wear while working out can be more of a challenge. Chicago requires people wear masks while exercising at indoor gyms. Even for those running outdoors, keeping faces covered on sidewalks and trails where people could encounter others is smart as a safety measure and show of respect, said Chicago Area Runners Association Executive Director Greg Hipp.

Many runners use neck gaiters that can be worn around the neck for easier breathing when a runner is alone, or pulled up over the mouth and nose when others are near, Hipp said.

Under Armour said its “Sportsmask,” designed for athletes, sold out within an hour when it was introduced in June. The mask has structured fabric designed to sit off the wearer’s mouth and nose for better airflow. There are three layers; the one that sits closest to the skin has an anti-microbial treatment and is designed to feel cool.

The company worked with health experts when designing a mask for workers in hospitals near its Maryland headquarters, and used what it learned to make the Sportsmask, according to Kyle Blakely, Under Armour’s vice president of materials innovation.

Another athletic brand, New Balance, has said it plans to sell an “athletics-ready face mask” in the coming weeks.

Some masks designed for exercise are already on the market. At specialty running store Dick Pond Athletics, a “performance mask” made by Zensah sold out as soon as shipments arrived, said Caroline Clayton, assistant manager of the St. Charles store.

After the pandemic hit, Florida-based Zensah used the same fabric that goes into its other athletic apparel to make face masks. It’s designed to be antibacterial and wick moisture away from the skin, said CEO Ze’ev Feig.

The company is working on a second version with loops worn behind the ears instead of around the back of the head. The behind-the-head design was meant to keep the mask from tugging on the wearer’s ears, but women who wear their hair down tend to prefer ear loops, Feig said. Zensah is also working on a lighter, cooler-feeling version of its neck gaiter, originally designed to be worn for warmth in winter.

Higher-tech masks can come with a higher price tag. Under Armour’s Sportsmask is $30 — the same price The Tie Bar charges for a pack of five. Masks from Zensah and PrideMasks cost $18 and $15, respectively. Gap sells three-packs for $15. 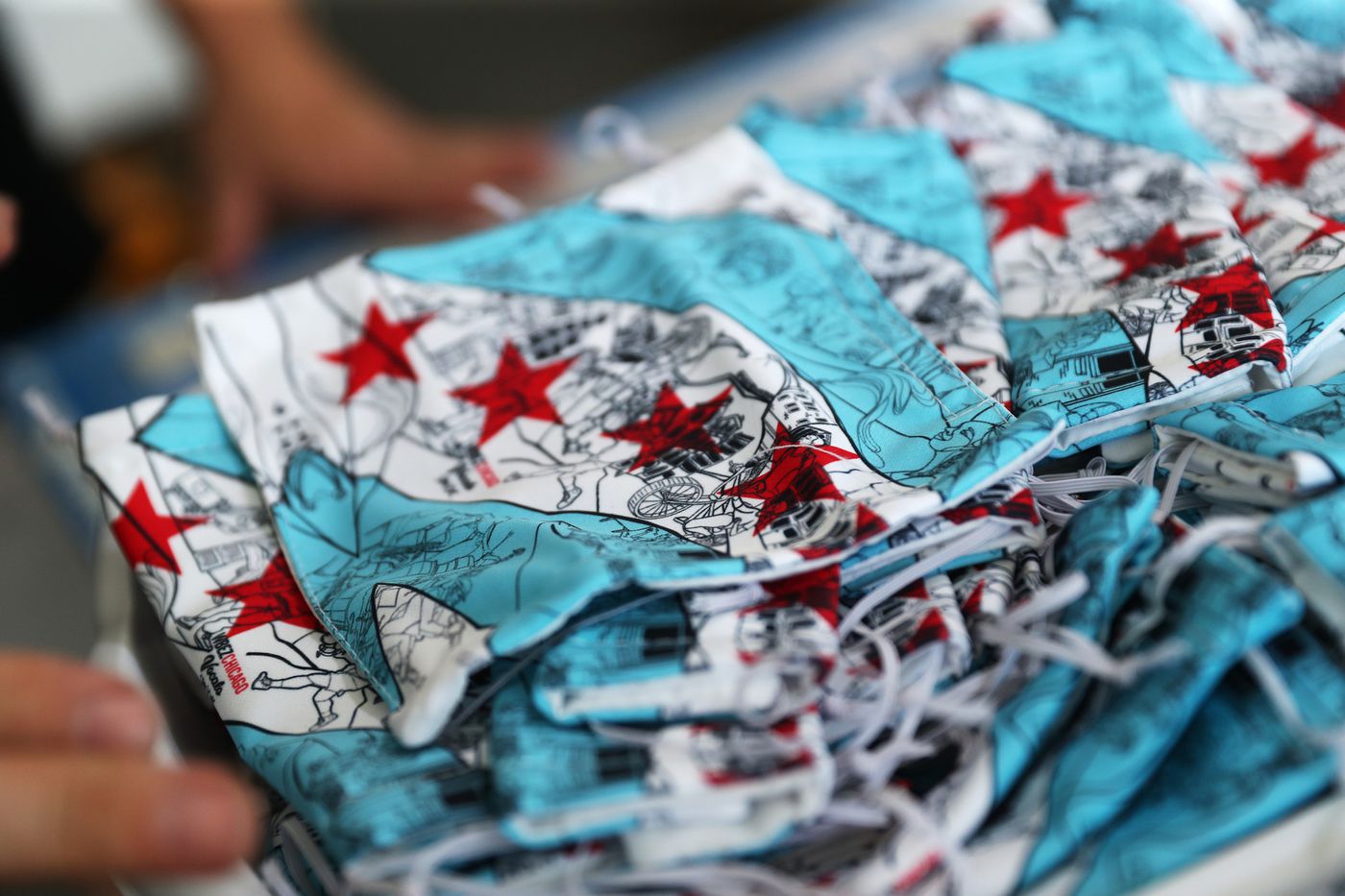 Two separate studies on the effectiveness of homemade masks at the University of Illinois and Wake Forest Baptist Health found multiple layers are better than one, as are heavier fabrics.

At the University of Illinois, researchers filled an inhaler with distilled water mixed with tiny particles and compared how effectively common household fabrics blocked droplets puffed by the inhaler.

A mask made from a single layer of cotton T-shirt material caught about 40% of the droplets, but two layers blocked about 98%. That’s comparable to a surgical mask but significantly more breathable, said Taher Saif, professor of mechanical science and engineering at the University of Illinois at Urbana-Champaign. Other fabrics tested, including silk, polyester and a dish towel, were “all pretty good,” meaning consumers shouldn’t feel they need to buy an expensive version, he said.

Masks with a single layer of fabric or two layers of lower-quality, lightweight cotton performed worse.

If someone isn’t sure whether a fabric will make a good filter, hold it up to the light, said Segal, Wake Forest Baptist’s chair of anesthesiology. If the light highlights individual fibers, it’s likely a looser weave and may not be as effective.

A mask also needs to be breathable, and not just because it’s more comfortable. If the fabric is too good at blocking air, respiratory droplets might escape out the sides of the mask when the wearer exhales, according to the researchers. Ensuring a good fit around the sides of the face helps too, Segal said.

Still, experts said it’s OK to aim for a balance between good protection and something that’s tolerable to wear as designed.

“If you’re wearing a mask with added layers of filtration but keep touching it or dropping it to your chin for a breath of fresh air, you’re better off opting for a more breathable choice,” Christa Janse van Rensburg, professor of sports medicine at the University of Pretoria in South Africa, said in an email.

Several brands say they use moisture-wicking materials, which should be more comfortable in hot weather since they are designed to move liquid, like sweat, away from your skin to the side of the fabric exposed to the air, where it can dry.

That means you’re less likely to end up with a soggy layer of cotton over your mouth, though it also means the mask probably isn’t doing as good a job of containing respiratory droplets that could transmit the virus causing COVID-19, said Janse van Rensburg, who wrote about the use of masks during exercise for the British Journal of Sports Medicine’s blog in June.

If all else fails, pack spares. A wet, sweaty mask will be less comfortable and could irritate the skin, Janse van Rensburg said.

Segal had another option: Focus on social distancing.

“Maybe don’t go out unless you have to, and then you don’t need a mask.”

Nagelsmann is the youngest coach in the history of the Champions League to reach the semifinals
Courtois will take the first number in Real Madrid. Lunin will probably get the 13th
Twitter posted a post Name a player better than Phil Jones, then deleted it and apologized
Robbie Williams came up with a form for the club from England's underground. To drive for Port Vale, he gave his song to FIFA 2000 for free
Setien about the match with Bayern: the Game will be equal. Barca has something to say
Olmo scored for Atletico. This is his 1st goal for Leipzig in the Champions League
Xavi: Messi needs Barcelona and Barca needs Leo. If he is happy, the club will win more trophies
Source https://www.chicagotribune.com/coronavirus/ct-coronavirus-illinois-face-mask-design-comfort-20200701-hniz3t552rc4rmrjcr3r2ywrga-story.html#ed=rss_www.chicagotribune.com/arcio/rss/category/news/

Maskless woman hit gate agent after being turned away from flight: cops

This week on "Sunday Morning" (August 16)

What the Kavanaugh confirmation hearings reveal about Kamala Harris

What Time Will ‘The Legend of Korra’ Be on Netflix?

'90 Day Fiancé' stars Darcey and Stacey Silva talk their new spinoff and dating: 'We go with our heart'

Working From Home? Here Are 7 Ways to Be More Productive.

The Future of the House Republicans Is Fully Unhinged

Biden calls for mask mandates in all 50 states: 'It's about saving Americans' lives'

How to Cycle Up ‘Mount Everest’

LeAnn Rimes on how she 'struggled' with fame until her 30s: 'I was labeled so many things'

Dogs work together to steal leftovers from counter in hilarious video

Jets QB Sam Darnold ate better this offseason, which meant 'not having In-N-Out every single day'

Stream It Or Skip It: ‘An Easy Girl’ on Netflix, a Steamy, Provocative and Surprisingly Subtle Coming-of-Age Drama

How Chattanooga Is Handling the Census Count Under Covid

Don’t Like What You See on Zoom? Get a Face-Lift and Join the Crowd.

Voting by mail is popular in Florida, despite President Trump's criticisms

Trump, Pelosi, McConnell blame one another as new coronavirus aid package remains out of reach

Police commissioner sues over arrest at board meeting

College students shocked to hear 'Biden' student loan plan is really Trump's: 'I hate him, but that's a start'

Biden, Harris blasted by mainstream media for not taking questions from reporters

Why fans think Chrissy Teigen is pregnant with baby No. 3

'This is what our founders had in mind.' HBCUs celebrate Kamala Harris' vice presidential run

Joe Biden: For The Next 3 Months, All Americans Should Wear A Mask When Outside

Is “The Night They Drove Old Dixie Down” Really a Pro-Confederate Anthem?

The Immoral Double Life of the Former King of Spain

Israel and the UAE will establish 'full normalization of relations,' Trump says