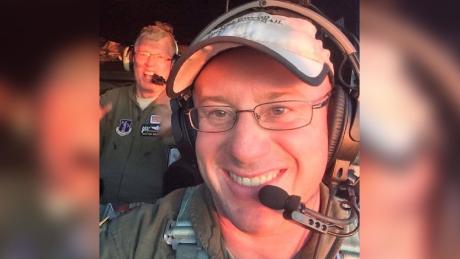 "Ian was a devoted father and husband, a brave first responder, and a selfless service member who made the ultimate sacrifice helping the people of Australia combat the catastrophic wildfires devastating their country," Montana Gov. Steve Bullock said in issuing the order to lower the flags.

"Our service members and their families already sacrifice so much, and Ian took his call of duty even further to help those in need across the world."

The cause of the crash was not immediately known.

SC authorities to say how missing girl, neighbor were killed

Warren: Sanders 'has a lot of questions to answer' about supporters' attacks

Facing a Wave of Sex-Abuse Claims, Boy Scouts of America Files for Bankruptcy

Quality of life summonses in NYC dropped by half since 2017 reforms, report says

Boy Scouts file for bankruptcy due to sex-abuse lawsuits

Reporter's Notebook: How the war-powers fight has stretched back decades

Olivia Culpo sizzles in tiny bikini on vacation: 'Let's go to the beach!'

An Uber driver fired at passengers after an argument, New Orleans police say

A later bedtime linked with obesity for children under 6, study says

In New York City, Homeless is Where the Heart is

Yalta and the Death of the ‘Good War’

If Duterte Wants Us Out, Then Let’s Go

How Political Parties Kill Our Commitment to the Good

Jay Wright won’t be leaving Villanova for the Knicks

'Shah Rukh Khan has no time for friends like me:' Juhi Chawla (Throwback)

Keira Knightley opens up about her latest role in Misbehaviour

A positive development in the Mets’ Jed Lowrie saga

Former NYPD commissioner: De Blasio should be 'screaming at the top of his lungs' over new bail-reform law

'I keep saying no to him, never said yes': Neha Kakkar on Aditya Narayan's marriage proposal