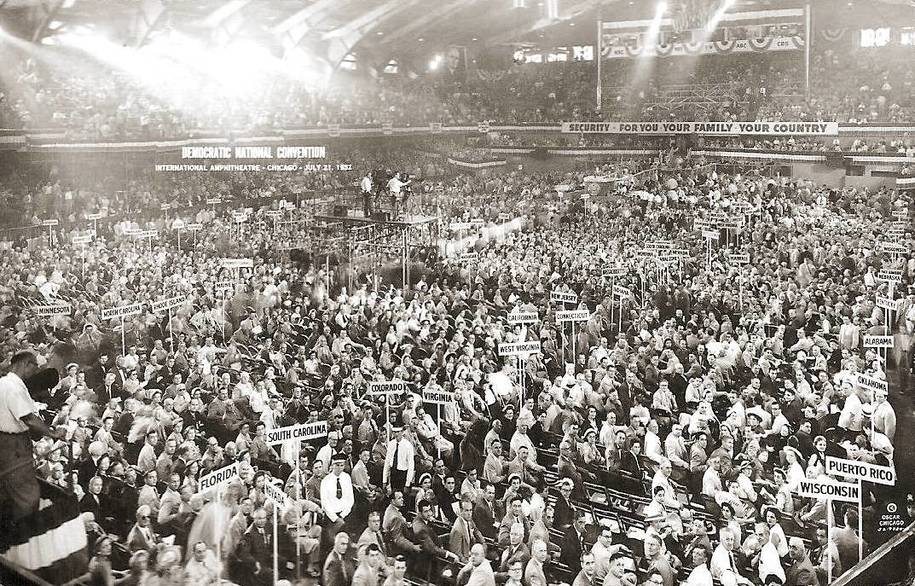 It took three ballots for the Democrats in convention in Chicago to select their presidential nominee in 1952.

At least six candidates will likely be alive through Super Tuesday (March 3) and quite possibly beyond—Sanders, Buttigieg, Klobuchar, Bloomberg, Biden, and Warren. This fragmentation well into the primary season is unprecedented. None of them will win more than a third of the total delegates.

Therefore, to be nominated on the first ballot, a breakout candidate would need to win more than 60 percent of the delegates in the remaining primaries after March. No way.

The convention that went beyond the first ballot was in 1952. Illinois Governor Adlai Stevenson came in third on the first ballot, and it took three ballots for him to win.

There will be a frantic quest for a unity candidate. That could be Warren if she can break out of single digits and revive her campaign. It’s hard to imagine any other current candidate being even grudgingly acceptable to Sanders forces, many of whom might bolt and even mount a write-in campaign.

Given Bloomberg’s well-earned troubles with blacks, women, and progressives, it’s also hard to imagine Bloomberg emerging as the unity candidate no matter how many billions he spends. One can even imagine the convention going outside the current field to Ohio Senator Sherrod Brown.

There is no Republican Party anymore. There's a Trump party, or cult, and it is cemented largely on false grievances that are incompatible with rule of law. https://t.co/Aq1BYChlcH

At Daily Kos on this date in 2005—"Controversial" Negroponte Nominated to Be First Director of National Intelligence:

The current U.S. Ambassador to Iraq, John Negroponte, has been nominated to become the first Director of National Intelligence […]

Negroponte began his diplomatic career in 1960 and served in South Vietnam before becoming an aide to Henry Kissinger during negotiations in Paris with North Vietnam. From 1981 to 1985, he was U.S. ambassador to Honduras, where he helped carry out the Reagan administration's efforts, using the Contra rebels, to oust the Sandinista government in Nicaragua. He also served as ambassador to Mexico and the Philippines. After leaving the diplomatic service in 1997, Negroponte worked as a senior executive with the McGraw-Hill publishing company. In 2001, Bush appointed him as ambassador to the United Nations, a post he held until he was named ambassador to Iraq last year. A 1960 graduate of Yale University, the London-born son of a Greek shipping magnate speaks five languages.

"The DNI [National Directorate of Investigation] maintained a secret unit - the Honduran Anti-Communist Liberation Army (ELACH), a rightist paramilitary organization which conducted operations against Honduran leftists. According to DELETED, during the period ELACH operated (1980-1984), ELACH's operations included surveillance, kidnappings, interrogation under duress, and execution of prisoners who were Honduran revolutionaries."

On today’s Kagro in the Morning show: Greg Dworkin updates us on the state of the race. Caucus debacles &amp; other unintended consequences of reform (and baseball cheating). Trump confesses, retaliates, and hires back a bunch of his previously-fired losers. Donald and Boris are fighting.

ATX TV Festival is going virtual because of coronavirus pandemic

DeSantis to Churches: ‘Keep God Close’ but ‘Keep COVID-19 Away’

States urge US to allow SNAP recipients to grocery-shop online

Inside the scandalous life of soccer WAG Wanda Nara

Love and hate in our America: Maria Hinojosa's upcoming memoir

At 90, she said her final goodbyes as doctors prepared her to die from coronavirus. Then she survived

Delays and Shortages Exacerbate Coronavirus Testing Gaps in the U.S.

How the Trump campaign is adjusting in the time of coronavirus

Speeding soars in NYC despite fewer cars on road amid coronavirus

Shania Twain performs hits medley with her horse on 'ACM Presents: Our Country'

Networking in the New Normal

4 Ways to Turn Uncertainty into Strength for Your Business

Quarantined Lyft and Uber drivers are fighting for coronavirus pay

The Real Housewives of Beverly Hills Taglines Will Make You So Excited for Season 10!

A Tiger Is Slightly Sick With Coronavirus. Your Cats Are Probably OK

How does a bidet work and should you get one?