North America has lost nearly 3 billion birds since 1970, according to a new analysis of bird survey and radar data.

The sharp decline, described in a study in the journal Science, is not just bad for birds. It also bodes ill for the ecosystems those birds inhabit, and points to a need for action to halt and perhaps reverse the drop, scientists said.

Many animals are threatened with extinction because of human activity, but that’s not the only problem they face. Loss of abundance spells trouble too because it can have profound consequences for the ecosystems they inhabit.

Conservationists studying North American birds had known that some at least some species were declining, but they didn’t know what the net loss, or gain, might be.

“Previously we didn’t have good estimates of population size,” Rosenberg said. “We knew the trends, but we didn’t really know how many birds of each kind were out there.”

To find out, he and his colleagues analyzed more than a dozen bird survey data sets that covered 529 bird species across a host of ecosystems in the U.S. and Canada. These data sets, such as the North American Breeding Bird Survey, rely on citizen scientists to conduct counts along roadsides across North America every year, and boast records going back decades.

The researchers were also able to track feathered fliers with a network of 143 weather radars, which often catch migrating birds on their nighttime routes. 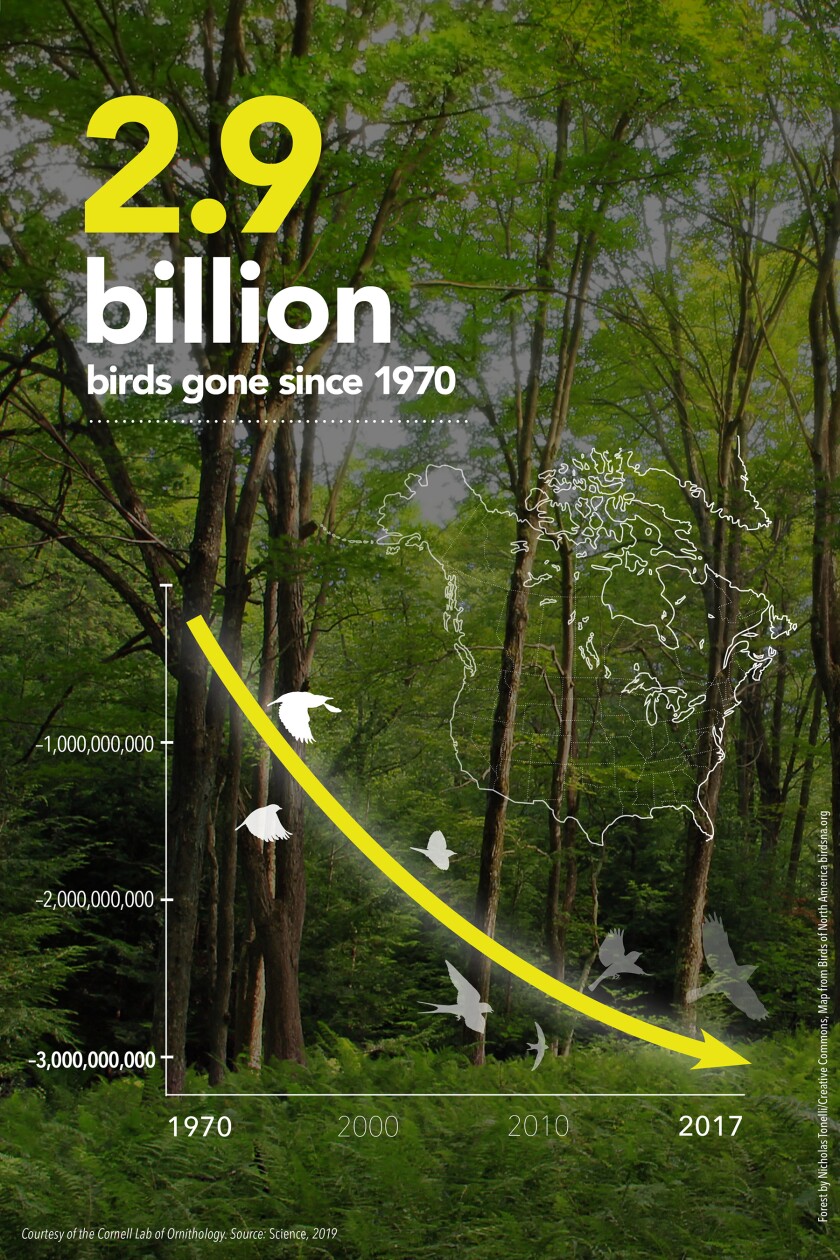 The data added up to a grim conclusion: Over nearly half a century, bird populations in North America had experienced a steep decline. There are 2.9 billion fewer birds today than there were in 1970 — a reduction of 29%.

Steven Beissinger, a conservation biologist at UC Berkeley, called the results and their implications “dizzying.”

“I was pretty surprised,” said Beissinger, who was not involved in the study. “We don’t usually think in billions of birds.”

Of those lost birds, 90% come from just 12 bird families that include common and widespread species such as sparrows, swallows, warblers and finches. 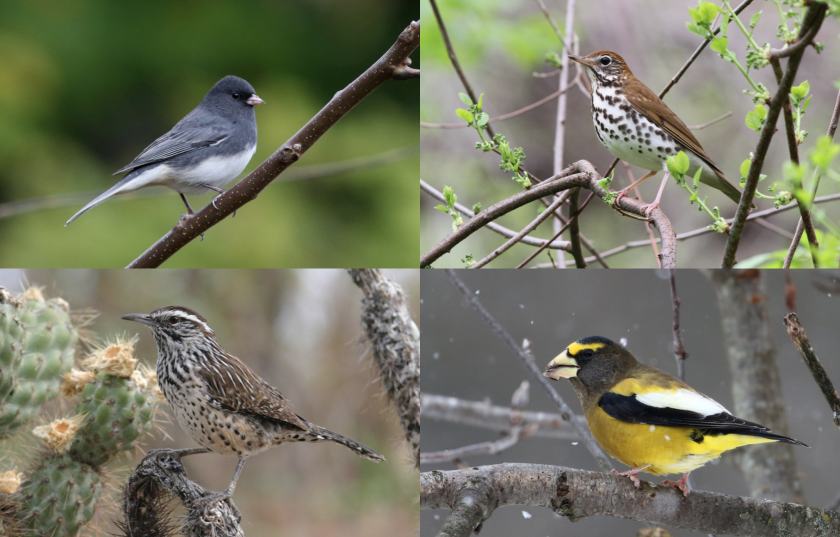 Four birds representing species that have seen dramatic declines in North America since 1970. Clockwise from top left: a dark-Eyed junco, a wood thrush, an evening grosbeak and a cactus wren.

Declines in the abundance of common species may not seem as dramatic as the endangerment of rare ones, but it is a very serious form of ecosystem erosion, the scientists said.

That’s because abundant species often play important roles in their biomes, whether they control pests, pollinate flowers, disperse seeds, provide food for other animals and even contribute to the natural beauty of an area that draws tourists who support local economies.

Other formerly common species have fallen from mere loss of abundance to elimination.

Rosenberg pointed to the example of the passenger pigeon. Once it was probably the most abundant bird on the planet, but it was hunted into extinction by 1914. He added that the trend line of passenger pigeons’ losses looks similar to the trend seen in the new study, according to work by one of his coauthors, Jessica Stanton of the U.S. Geological Survey.

“Nobody ever thought the passenger pigeon would go extinct — and it did in a relatively short period,” Rosenberg said. “We’re not saying these other birds are on their way to extinction, but it certainly should give us pause and make us concerned that we’re seeing that level of decline.”

Across ecosystems, grassland birds — a group that includes sparrows and meadowlarks — were hit the hardest, the researchers said. Since 1970, their numbers have fallen by more than 720 million, representing 53% of the initial population.

More than 1 billion birds have been lost from all forest biomes. Shorebirds, long threatened by the draining of coastal wetlands and urbanization, saw declines of more than 37%. 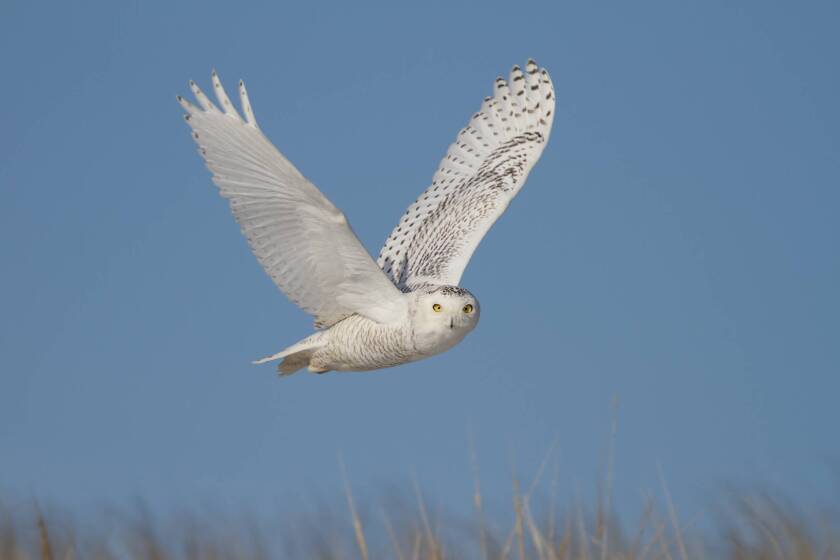 The researchers did not weigh in on the causes for these declines. But other work has pointed to habitat loss due to urbanization, pollution, pesticides, and the intensification and expansion of agriculture as likely culprits, Rosenberg said.

There were a few success stories in the data that could offer a road map for aiding other bird populations, Rosenberg said. Wetland birds, such as ducks and geese, have increased, primarily because of conservation efforts that protected wetland habitats over the last few decades. (Much of that conservation was driven by hunters, who wanted to maintain healthy populations, he added.)

And raptors such as bald eagles, ospreys and peregrine falcons have also improved since the 1970s, when their numbers had been decimated by the use of the pesticide DDT. It was banned for agricultural use in 1972, and laws that protected the birds of prey allowed them to recover.

“It’s yet another example of resilience in the bird population itself if we can remove the threats and give them a chance,” Rosenberg said.

Such policies and protections need to be put in place for other birds in other habitats, the scientists said.

It’s hard to say what ecosystem services have been lost or degraded because of the loss of birds over the last half-century, Beissinger said. For example, if there were more birds around to eat bugs, farmers might be using less pesticide.

There are things people can do to help halt the decline, Rosenberg said. For example, keeping cats indoors, choosing products (such as shade-grown coffee) that don’t profit off the destruction of avian habitat, and planting more bird-friendly native shrubs and trees are small steps that can make a difference.

The next step, Bessinger said, will be to figure out which factors are having the biggest effect on bird numbers.

“I think the work here is laying out the picture of what the changes are, and I think it’s going to be important to try and understand what’s causing this,” he said.

Atalanta bought Pashalic from Chelsea for 15 million euros (Nikolo Skira)
Russia, Germany and Portugal qualify for the Champions League (Bild)
Barcelona will not buy Neymar for 175 million euros and will focus on the transfer of Lautaro
🔙 Spanish football will return for the second half of Rayo Albacete. The first one was played six months ago, when the match was stopped because of zozuli's insults
Ulreich doesn't want to be Bayern's third goalie. He can move to Schalke
Lionel Scaloni: Lautaro will get better playing with Messi. He has a great future, but we need to give everything we can
The reading player criticized Phil Neville: I was hurt by the words that the England team was used as a springboard
Source https://www.latimes.com/environment/story/2019-09-19/nearly-3-billion-birds-are-missing

Denial of responsibility! The World News is an automatic aggregator of the all world's media. In each material the author and a hyperlink to the primary source are specified. All trademarks belong to their rightful owners, all materials to their authors. If you are the owner of the content and do not want us to publish your materials, please contact us by email [email protected]dnews.net. The content will be deleted within 24 hours.

The Latest: Floyd tested positive for COVID-19 in April

US Presses China for ‘Full Public Accounting’ of 1989 Tiananmen Crackdown

Reimagining the world after Covid

Julianne Hough is a 'deeply different person' now than when she married ex Brooks Laich in 2017: report

Inmate at Brooklyn federal lockup dies after guards pepper-spray him

Demonstrations Over George Floyd's Death And Police Brutality Carry On

Trump Uses the Military to Prove His Manhood

Rapper Trina criticized after protest, looting comments: ‘Keep … these animals off the street’

Migrants stuck in Panama demand to continue journey to U.S.

Bill Bennett fires back at Mattis over criticism of Trump, says 'we need to get a hold of' urban riots

Could Police Actually Shut Down a City’s Cell Service?

This mountainous region produces some of the best cheese in Asia

Pastors call on Joliet mayor to resign following viral video of protest skirmish, cite previous disciplinary action from his work as a cop years ago

Congress approves sweeping changes to PPP. Here are the details

Bureau Of Prisons Locks Down Corrections Facilities Amid Social Unrest

Malcolm Jenkins responds to Drew Brees: 'You're a part of the problem'