Years ago in the early 1990s, Willy T. Ribbs, the first Black man to compete in the Indianapolis 500, sought a deep-pocketed partner, a heavy breather, as he calls them, to help catapult him into the victory lane.

Ribbs had already aligned with Bill Cosby, long before his fall from grace. But he hoped to secure added financial backing from Michael Jordan, then at the height of his playing prowess.

“He had N.B.A. championships on his mind,” said Ribbs, who also drove in a few NASCAR races. “I totally understood. He was firmly focused on winning championships. Plus, he was young then. When he declined, I truly understood that. But now? He’s laying out by the pool at the La Palapa.”

No longer. This week, Jordan announced that he is joining Denny Hamlin, one of the most lauded drivers in the sport, to form a NASCAR team with Darrell “Bubba” Wallace Jr., the lone Black driver on NASCAR’s top level. It will begin competition in the 2021 season.

The pairing of Jordan and Wallace is significant in a sport that historically lacks minority representation and has struggled to expand and diversify its largely white fan base.

With the move, Jordan, who is also the owner of the N.B.A.’s Charlotte Hornets, becomes the first African-American majority owner in NASCAR since the pioneer Wendell Scott raced during the 1960s Civil Rights era.

“A lot of what I call closet NASCAR fans are Black fans,” said Bill Lester, who for years was the only African-American driver in NASCAR’s top series. “Now with Jordan opening the door to the sport, I think that that’s going to go a long way.”

“But it’ll just be a blip on the radar,’’ he added, “unless the team can win. If the team can win, then that’s going to really kick the door down. It’ll be kind of like the phenomena of what Venus and Serena have done for tennis and what Tiger’s done for golf.”

Jordan called himself a lifetime NASCAR fan in a statement announcing the formation and said that his parents routinely took his family to races during his childhood in North Carolina. Brad Daugherty, a former N.B.A. player and Jordan’s college teammate at the University of North Carolina, is a partner at JTG Daugherty Racing.

“The timing seemed perfect as NASCAR is evolving and embracing social change more and more,” Jordan said in the statement, adding: “I see this as a chance to educate a new audience and open more opportunities for Black people in racing.”

That is the vision that Warrick Scott thought of when he learned that Jordan is entering NASCAR ownership. Scott is the grandson of Wendell Scott, who died in 1990 and was the first Black driver to win a race at NASCAR’s premier level.

“One thing I can tell you from going to racetracks, people already wear Jordans to the races,” Warrick Scott said.

Often, he said, Black and other nonwhite people are never exposed to the racetrack.

“That’s the driving force behind what we do by using my grandfather’s legacy to provide critical access to all of the dopeness that exists within the sport of NASCAR,” Warrick Scott said. “There’s also a lot of great jobs within that sport. Hopefully, the Jordan Brand, because it’s an enterprise, will help provide other opportunities in those lanes as well.”

Wallace ignited the sport’s confrontation with its divisive past this summer as the country reeled from protests over systemic racism and police brutality.

He unveiled a “Black Lives Matter” message on his racecar and instigated NASCAR’s banning of the Confederate flag from its events and premises. Drivers and crews walked with Wallace in solidarity at the celebrated Talladega racetrack in Alabama after what was originally thought to be a noose was found hanging in his stall. Federal officials later determined that Wallace had not been targeted for a hate crime. 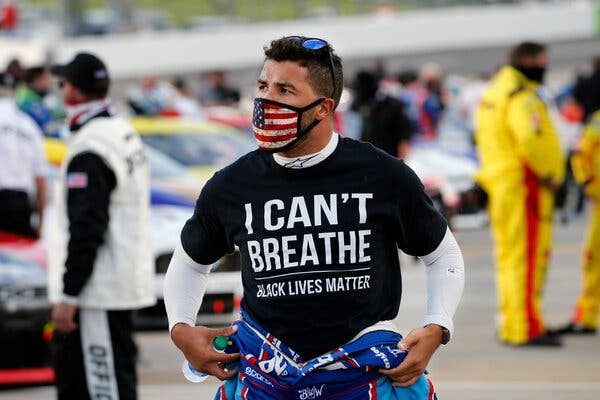 Bubba Wallace at races this year has sought to raise awareness of racial injustice.Credit...Steve Helber/Associated Press

“Michael Jordan just kind of cuts across a lot of demographics and of course in this part of the country, too, the fact that he’s in North Carolina, and played at Carolina, it’s getting a lot of people’s attention,” Pierce said. “I think it has great potential to change the sport for the better.”

Uniting with Jordan and Hamlin could also give Wallace a boost.

Wallace is a product of NASCAR’s Drive for Diversity development program, headed by Max Siegel, the team owner of Rev Racing, who is dismayed at the lack of a pipeline of Black drivers.

“I’m looking at this and I’m really kind of frustrated because I think that Bubba Wallace is truly a very talented, authentic driver capable of winning, has been since the kid was 15 years old,” Siegel said.

Earlier this month, Wallace announced his departure from Richard Petty Motorsports. He has collected five top-10 finishes this season, but has not won a Cup race during his three seasons with Petty.

“A lot of naysayers, a lot of the Bubba haters were saying he got fired and Bubba was out in the ocean without a paddle,” Ribbs said. “That cat’s on an ocean liner now.

Ribbs and Lester both said they heard news of the formation days before the announcement. They both hope that Jordan’s involvement will create more corporate sponsorship opportunities for minorities.

“It is going to definitely raise awareness without a doubt,” Ribbs said.

NASCAR officials anticipate that the debut of the Next Generation car for the 2022 Cup Series will help curb costs for team owners.

For Lester, the current financial obligations to compete is akin to calling LeBron James the greatest basketball player in the world before asking to him to provide $18-$20 million a year just to play. “Corporate America controls the purse strings of our ability to compete, because it’s a sport where you bring your checkbook first and your helmet second,” he said. “But once you’re bitten by the racing bug, you’re never able to shake it. That’s what it comes down to.”

One of the first lessons an owner must navigate, Lester said, is how to spend others’ money. For that, Lester said Jordan will need to forge a successful relationship with Joe Gibbs Racing.

“Joe Gibbs has the experience in the sport to basically accelerate anything having to do with success,” Lester said. He’s got a relationship with Toyota that’s long term. He’s got all the resources, all the engineers, all the simulation ability. He’s got all the technology needed to be successful. Michael Jordan, I haven’t heard him say he’s going to put his financial empire at risk for this.”

Lester, though, isn’t doubting Jordan’s involvement and its potential impact on the sport.

“What they have brewing for next year, I think will prove successful,” he said. “Hamlin is a winner and especially Jordan, is a true winner. He would not get out of his comfort zone and out of his lane unless he believed that there was a pot at the end of the rainbow, a pot of gold.”

Barcelona Vs Juventus: We are glad that you were able to see 🐐 on your field
Rennes coach on one point in 2 games Champions League: this is our debut, we are learning
Simone Inzaghi: a Draw with Brugge can greatly affect the position in the group
Lopetegui on the win over Rennes: Sevilla played almost perfectly
Danilo about 0:2 with Barca: Juventus played organized, but not aggressive enough
Tuchel on neymar's adductor muscle injury: I hope it is not serious
Jaydon Sancho: Zenit made us work hard, but Borussia managed to score
Source https://www.nytimes.com/2020/09/25/sports/autoracing/nascar-jordan-bubba-wallace.html