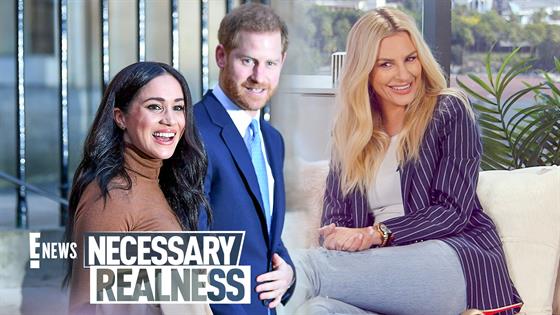 Meghan Markle's Hollywood roots may be coming back in handy.

On the heels of her and Prince Harry's royal exit and resulting decisions about the couple's new life together, one of the biggest changes to result from the bombshell move is that, as a result of stepping back from royal duties, they will no longer receive public funds.

It's a ruling that aligns with the intention the couple expressed at the start of the year to become financially independent as they were previously prohibited from earning any income. Now, the question is: how do they plan to make their own money?

One answer may be, according to reports, a production company. Citing sources, The Daily Mail reported on the potential endeavor and said the famous mom and dad "plan to make a living by providing voiceovers and producing documentaries on 'worthy' issues such as mental health and climate change."

"The sorts of deals they will do will be more along the lines of the documentary series the duke is executive producing on mental health for Apple TV. It's a new model, admittedly, but they are determined to prove to the family that this can work," a source told the website. "Given the duchess's work [as an actress] before she married and the duke's interests, it is likely that this is the route they want to go down."

There have been other signs pointing this direction for the pair, including Harry raising the subject of voiceover work to Disney CEO Bob Iger and The Lion King director Jon Favreau at the London premiere of the film in July 2019. Earlier this month, The Times reported Markle had signed a deal with Disney involving a voiceover for a donation to Elephants Without Borders. The deal was reportedly made before the couple announced their plan to step back from royal duties. However, they have not commented publicly on the reports.

Whatever their future holds, "We are taking a leap of faith," Archie Harrison's dad recently said at a charity dinner. "So, thank you for giving me the courage to take this next step."

U.S. Officials Told Sanders That Russia Is Trying To Help His Campaign

Blagojevich declares himself a 'political prisoner' in heated interview

HBO Max Wants To Know, How You Doin'? As It Teases 'Friends' Reunion

The NFL and MLB want to expand their playoffs for a simple reason: $$$

Most Americans will need a new ID to fly, starting in October

Queens woman struck and killed by driver while crossing the street

Man convicted of killing 2 who intervened in hate tirade

Can the Military Fix Base Housing?

Cripple the Intelligence Agencies? Not Smart

3 things to watch this weekend to celebrate Black History Month

With the Nationals at Spring Training: Catch 162

Trump furious after officials allowed Americans with coronavirus to fly home with other passengers: report

Bernie Sanders is blatantly wrong: We’re far better off than in 1975

'It could be a zoo': Nevada on edge as caucus day arrives

Unknown valor: Talking to some unsung heroes of Iwo Jima

When women die in childbirth, these are the fathers left behind

Students and teachers said California didn't have a plan to teach kids to read. Now, the state has to pay $53 million

With 4 Deaths in Iran and More Cases on 3 Continents, Fears of Coronavirus Pandemic Rise

Back on the Field, Yoenis Cespedes Is Mum About What Kept Him Away

Wells Fargo to Pay $3B to Settle Fake-Accounts Scandal

University of Michigan officials told of abuse decades ago

Greyhound Will Stop Allowing Warrantless Immigration Checks On Its Buses

The head of the WHO warns 'the window of opportunity is narrowing' to stop the coronavirus' global spread, as South Korea cases spike and cases are reported in the Middle East

The head of the WHO warns 'the window of opportunity is narrowing' to stop the coronavirus' global spread, as South Korea confirms 142 new cases and more are reported in the Middle East