There are not many performers who can steal even an iota of the spotlight away from Beyoncé when she’s locked in. But in Black is King, her new visual album released last week on Disney+, an intriguing figure returns again and again to demand viewers’ attention. He wanders gorgeous African landscapes pensively, eyelids heavy and skin painted so blue as to appear almost translucent; he dances side by side with Beyoncé, hips jerking, tongue flailing outward.

That man is Stephen “Papi” Ojo, a self-taught 22-year-old Nigerian-born performer who has quietly played an outsize role in bringing African dance to American stages. He flanked Rihanna’s right shoulder at the 2018 Grammys as their gwara gwara dance (from South Africa) became a moment of international fascination; he taught Janet Jackson the kupe (from Ghana) for her music video “Made For Now,” a vibrant whirlwind of diasphoric triumph.

And in Black is King, Ojo is the most prominent face beyond that of its headlining star. He plays the “blue man,” who represents the subconscious of the protagonist prince and the power of African dance. It’s another unexpected moment of ascendance for a self-described “boy from Lagos” who has experienced harrowing personal tragedy and is still searching for financial stability: just a few months ago, he was packaging boxes overnight at an Amazon warehouse in Staten Island.

“I have to make sure my people are properly represented,” Ojo says. “The fact that we have a legend like Beyoncé doing these moves will make people generations from now want to research them and think, ‘If Beyoncé is doing it, it must be important! It must have some kind of meaning.’”

Ojo grew up in Lagos, Nigeria’s most populous city. His family was solidly middle class but dealt with what he calls “day-to-day Lagos struggles,” including its unreliable power grid and bumpy roads. Ojo was steeped in the country’s art and culture, listening to Afrobeat artists like P-Square and Sound Sultan and dancing at naming ceremonies and birthday parties for fun.

In 2008, Ojo’s family moved to Brooklyn in search of better opportunities. After settling in the neighborhood East New York, Ojo started a dance group alongside his older brother Emmanuel and friend Caleb Bonney; they would watch YouTube videos of African dance routines and rehearse incessantly until they were ready to post their own renditions on social media. Before long, these videos earned them live audiences. “We would go to college shows or fashion shows and be the only Afro dancers—and people loved us because that’s not something they see,” he recalls.

But tragedy struck one day in 2016, when the Ojo brothers were in Pennsylvania for a church convention, and Stephen started drowning in the deep end of a hotel pool. Emmanuel jumped in to save him, and was able to lead Stephen to the edge of the pool. But by the time Stephen had climbed out, Emmanuel was drowning. By the time the paramedic arrived, it was too late to save him.

“He was my best friend,” Ojo says.

After his brother’s death, Ojo stopped dancing for awhile. “But I had to sit down and say to myself, ‘If Emmanuel was here right now, would he want me to quit dancing? Or would he want me to keep pushing the legacy that we’re trying to create for our family?’” he says. I told myself I needed to get back on the horse, keep putting out content for people to love the culture.”

Now a duo, the A.V.O. Boyz, as they called the group, threw themselves into dance lessons, viral challenges and live performances, and gained a larger following, at the same time as Nigerian musicians like Wizkid and Davido were making waves internationally. A year and a half later, Ojo was studying political science at the City College of New York when they were offered their first industry job: to flank Rihanna onstage at the 2018 Grammys during “Wild Thoughts.”

The first rehearsals were rough, but Ojo steadied himself and even helped to teach Rihanna the gwara gwara, a shimmying South African move that would immediately define the performance. “I got to teach Rihanna moves from Africa,” he says. “I thought, ‘we’ve reached the top.’”

The performance earned Ojo more high-profile gigs, including backing Big Sean and A$AP Ferg at the 2019 VMAs, Teyana Taylor at her Red Bull Music Academy show and Janet Jackson in “Made For Now,” which has 72 million views and counting. 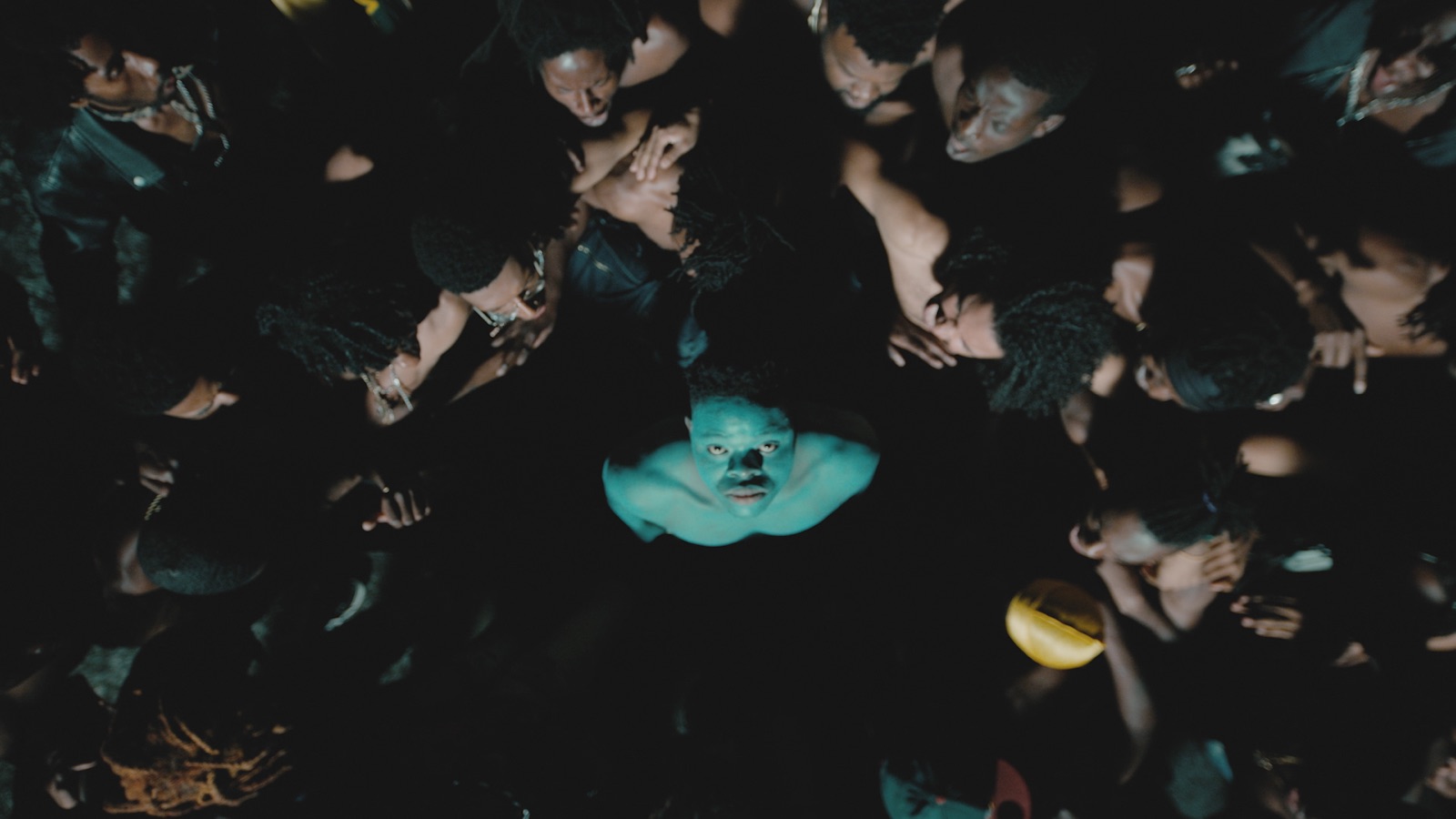 Stephen Ojo in "Black is King."

Last summer, Ojo was at the gym when he got a mysterious call. “They were just like, ‘Hey, we need you to fly to L.A. tomorrow for a big job,’” he says.

It turned out to be for the music video to Beyoncé’s “Spirit,” the rousing lead single off her album Lion King: The Gift. Ojo does not have a big role in that video by any stretch: he is one member of one of many featured dance troupes.

But Ojo says he helped choreograph parts of the dance and show her team different movements—like the network from Ghana and the kpakujemu from Nigeria. Not long after, he was asked to fly to South Africa, where he realized he was about to play a much bigger role. “When I got there, I was the only one there,” he says, laughing.

Black is King is loosely based on the story of The Lion King: a prince is born and must overcome adversity to find his way home. Since the film’s release, many have theorized about the significance of Ojo’s “blue man.” Some have speculated that he represents a water genie; another article postulates that his shade is a reference to “haint blue,” which is thought to protect against evil spirits or represent a spirit itself.

Ojo wasn’t particularly forthcoming about his character’s significance. “I’m supposed to be guiding Simba, with culturally-rooted afro-dance moves, throughout his stages of life,” he says. He was similarly reticent about how long he spent shooting (“a few months”) or where he shot (“We went to a lot of different places”).

But he did say that he was given free rein to create his own solo during “Find Your Way Back,” and that he taught Beyoncé specific African dance moves, like the Nigerian gbese, for their swaggering duet during “Already.” Ojo said he felt an enormous weight in serving as an African dance ambassador to one of the world’s biggest pop stars: “If you mess up, that could be a backlash from both ends—with people in the U.S. saying, ‘this guy doesn’t know what he’s doing,’ and people from back home being like, ‘you didn’t properly represent us,’” he says.

But the collaborative process went smoothly. “She was a very good student,” he says. “Paying homage to the originators, paying respect to our culture—some people might not care. But she was very receptive. She was being respectful the whole time, listening. And every move was clean, sharp, crisp.”

Beyoncé is credited as the director and executive producer of the project, and Ojo was witness to her artistic control. “She was working harder than anybody. She knew everything about the project like the back of her hand,” he says. “It made me realize, ‘this is something you need to emulate—to take and hold tight.’”

Ojo flew home, kept the secret for months, and was inspired to dive further into his own fledgling Afrobeat music career as a singer. But the coronavirus halted all of his performances, and in order to make money, he took a job at Amazon, packing boxes at their Staten Island warehouse. “But my heart couldn’t do it,” he says—so he left the job and returned to creating music and dance.

When Black is King was released on July 31, many on Twitter were commenting to ask about the significance of the blue man or offer him praise. (The film has mostly received acclaim, but some have argued it presents a monolithic portrayal of Africa.) Ojo is grateful for the attention, and he’s hoping to capitalize on the moment by putting out new dance videos and songs; in striving to match Beyoncé’s work ethic, he hopes to raise even more awareness and love for his cultural roots. “A lot more people want to do research, learn the dances, or understand what part of Africa they’re from,” he says. “It’s just a beautiful thing to see.”

Jose Mourinho: what happened to Dyer is not normal, he was dehydrated. If the League management doesn't care about the players, I don't
Jose went berserk twice during the match with Chelsea: ran over Lampard and ran to look for Dyer - he rushed to the toilet right during the game
Lampard on relegation from the League Cup: we Need to keep a positive attitude. Everything will come if Chelsea score second, leading the score
Call of nature, what can you do? Dyer explained why he ran to the dressing room during the match with Chelsea
Mourinho and Lampard shook hands before the penalty shootout. In the first half, they had a fight
Dest arrived in Spain to complete a transfer to Barca
Lionel Messi: I Am responsible for my mistakes. I wanted Barcelona to become stronger
Source https://time.com/5875458/black-is-king-dancer-papi-ojo/?utm_source=feedburner&utm_medium=feed&utm_campaign=Feed%3A+time%2Ftopstories+%28TIME%3A+Top+Stories%29

Biden and Trump Will Debate Six Main Issues. Here’s Where They Stand.

Meron Benvenisti Dies at 86; Urged One State for Jews and Palestinians

The Bad Bunny Crocs Sold Out