A Massachusetts man was arrested after police said he pulled a gun on a 30-year-old man outside a Walgreens because the alleged victim was not wearing a face mask inside a store.

Todd Goulston, 59, of East Bridgewater, was charged with multiple offenses following the alleged incident that occurred amid the state's coronavirus mask order. His license to carry a firearm and his guns were seized by officers, police said.

"Goulston allegedly pulled out a gun from his vehicle and pointed it at the other man, who had not been wearing a face mask in the store," according to a news release by the Bridgewater Police Department. 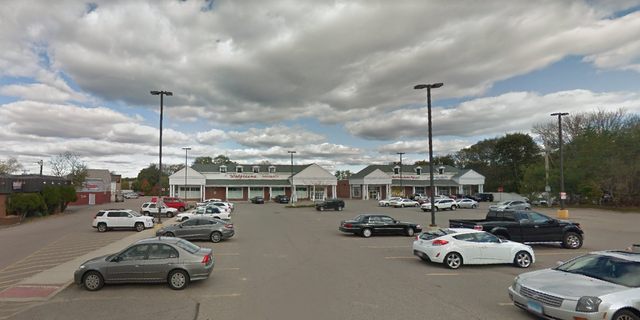 Todd Goulston, 59, of East Bridgewater was charged with multiple offenses following the incident at the Walgreens, which occurred amid the state's coronavirus mask order (Google Maps)

Police responded to Walgreens Pharmacy in Bridgewater around 5:20 p.m. on Friday. The altercation dragged into the parking lot, which is when Goulston allegedly pulled out the firearm, police said. He then got into his car and left the scene.

The 30-year-old was not injured during the incident, police said. Goulston was arrested him at his home.

Upon being placed into custody, police said the suspect complained of a medical issue and was transported to a local hospital.

Massachusetts Gov. Charlie Baker issued an emergency coronavirus order back in May requiring face masks or cloth face coverings in public places where social distancing was not possible. The order, which is currently in effect, applies to both indoor and outdoor spaces.

Goulston was charged with assault with a dangerous weapon, disorderly conduct, and disturbing the peace, the department said.

Lewandowski before the 1/4 Champions League: Barcelona is always dangerous. Bayern must show their qualities
Crouch on Messi's goal: Genius. Only he is able to get up from the pitch, make three incredible touches and score
Ignashevich Pro 1:1 with Spartak-2: torpedo has no problems with the structure of the game. But without blows there are no goals
Gattuso on Pirlo's appointment in Juve: All right, he got it. Being a player and a coach are different things
Sergi Roberto on the Barcelona-Bayern match: It will be like the final
David Silva has agreed a 3-year contract with Lazio for 9 million euros. He will leave the city for free
Mertens Pro 1:3 with Barca: after Langle's goal, Napoli forgot how to play
Source https://www.foxnews.com/us/massachusetts-suspect-pulled-gun-maskless-man-outside-walgreens-police-say

Where fantasy owners can go for their best tight end bargains

In a shocking plea, a former aide confesses to killing an Arkansas state senator

Collin Morikawa is young, poised and in PGA Championship hunt

'An administrative nightmare': Trump's executive action is a scramble for unemployment aid

Asia Today: Sources of many cases in Victoria untraceable